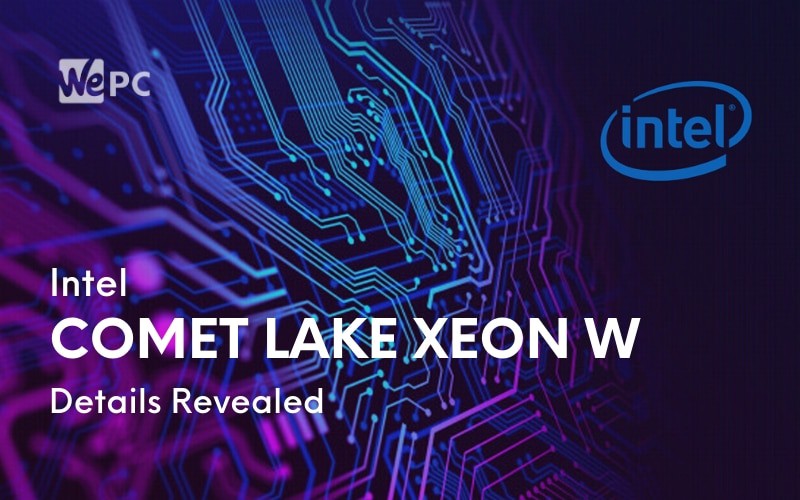 Details of the 10th generation Comet Lake Xeon W workstation CPUs have recently been unearthed from a Dutch retailer website.

We already know a bit about the Comet Lake-S desktop processors after they were officially launched recently, but not a lot was known about the workstation offerings.

In a tweet from hardware leaker @momomo_us, it looks like we now know the model names for seven Comet Lake Xeon chips. According to a Dutch printer supplies shop, these are now available for pre-order.

The names of these chips and the listed base clock, L3 cache and pricing are:

What Can We Gather from this Leak?

The retailer, unfortunately, did not list all the specifications for the Comet Lake Xeon W processors. However, it did list the clock speed, LGA1200 socket, and the amount of L3 cache available.

Knowing the possible model names gives us some insights into what to expect. First of all, the “W” designation is used for Intel’s enterprise-class chips that typically use the HEDT platform.

The “T” suffix on one of the models above relates to energy efficiency which you can see demonstrated with the lower base clock speed. The “P” suffix is unclear at this point. In the past, it used to refer to CPUs without an iGPU but as the base clock speeds are higher (and the listed prices) we’re not so sure anymore.

The L3 cache is particularly interesting because it helps us make an educated guess on the number of cores and threads for each model. This is based on what we’ve seen from other Intel processors in the past.

From the listing, it looks like the Xeon W-1290 is the flagship processor which comes with 20 MB of L3 cache. Based on what we’ve seen from other Comet Lake processors and workstation CPUs, we estimate the number of cores and threads will be 10/20.

Of course, we can’t guarantee those figures just yet as they’re based on an unconfirmed listing.

When Will Comet Lake Xeon Processors Be Released?

With a listing like this, we would hope that we’ll see these processors fairly soon. Comet Lake-S desktop processors have just been released so we imagine the workstation Xeon processors will be following on shortly after this.

However, we can’t confirm that the listing on the Dutch retailer site is genuine or accurate so we can’t really say what the release date will look like. If we hear any more news about the Xeon line of processors, we’ll make sure to keep you informed.