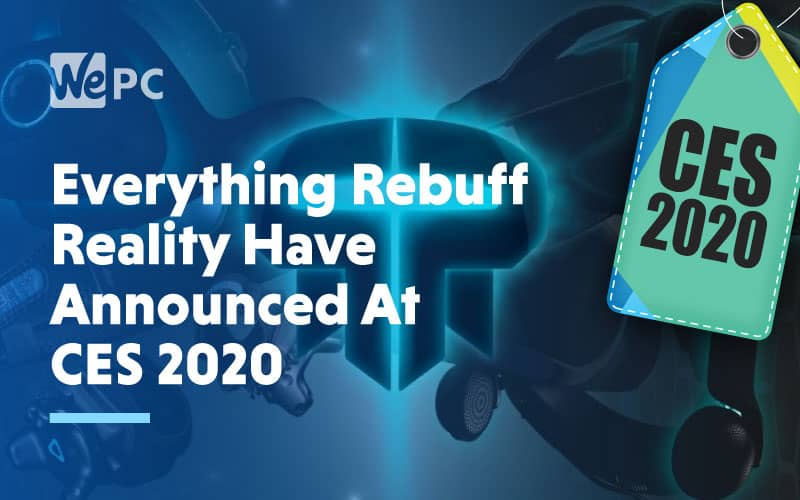 With the prevalence of VR gaming only set to increase this decade, it makes sense that we’re going to start seeing some pretty impressive peripherals to go along with it. So far, one of the leading brands for VR accessories is Rebuff Reality.

We’ve been sure to check out what they have been showcasing during this year’s CES event to keep you in the know.

Now available for preorder, Rebuff Reality have been showing off their new ‘VR Power’ during this year’s CES. The VR Power kit is a battery pack that fits on the back of the Oculus Quest, allowing for an increased amount of gaming time.

Coming with one battery pack, one USB-C cable, comfort padding and two cable management clips, you’ll have no problems getting this connected and comfortable in no time.

When connected, the VR Power will provide you with up to eight hours of gaming on a fully charged unit and ten hours of video streaming. More than enough for most users’ play sessions.

The best feature of all though for many users is the fact that this battery will act as a great counterweight to the front-heavy Oculus Quest. This is a common problem many users have described after using the Quest, fixing this issue and adding functionality while doing so is a great idea!

This isn’t the only thing on offer from Rebuff Reality though, if you are looking for a protective shell for your Oculus Quest then they have you covered. This shell aims to protect your Oculus Quest from accidental damage with its “Hexagonal hardened poly-carbonate membrane”.

As well as protecting the device, the VR Shell doesn’t interfere with any of the cameras and safeguards all buttons, ports and IPD controls.

Not a lot is currently known about this product but early viewings point towards it being a set of headphones that connect directly into the Oculus Quest. In a very similar style to the Valve Index headphones, this device allows for greater volume and quality of audio when using the headset.

Boasting up to 6 hours of battery life from a single charge, these might be the final piece of the puzzle if you’re looking to upgrade the audio on your headset. These appear to be set to retail for around $199 (with reductions through Kickstarter), so you may want to wait for reviews to pour in before making a final decision.

With these devices expected to ship early this year, some lucky buyers may even see theirs arrive on the “expected delivery date” of January 10th! Improving the functionality of the Oculus Quest in such a novel way has this looking like a must-buy purchase if you’ve found the weight of the Oculus Quest a problem.