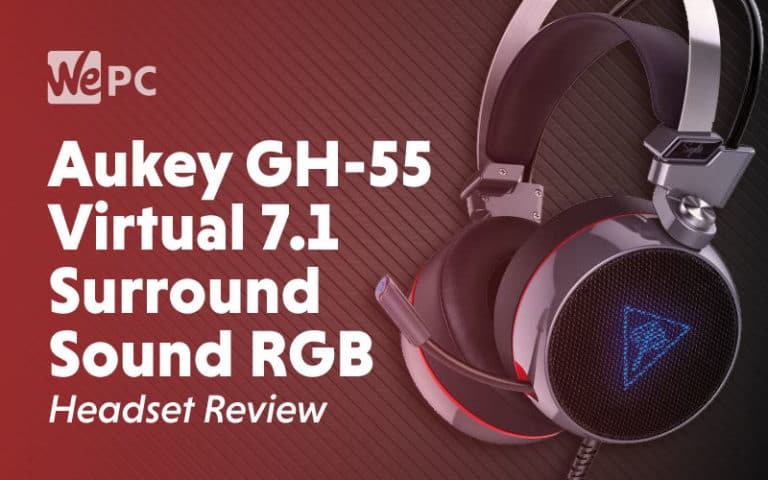 Today, we’re going to review the Aukey GH-55 Virtual 7.1 Surround Sound RGB Headset, which is… a mouthful. To make that easier to digest, we’ll be referring to it as the GH-55 throughout the rest of this review.

This is our first headset review on WePC, but we’re going to do our absolute best to cover everything you need to know about this headset. Let us know in the comments below if we missed anything important, or if you just have a question that this review didn’t answer, and we’ll get back to you ASAP.

With no further ado, let’s begin. 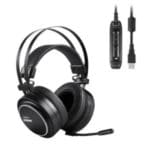 Taken from AUKEY’s product page, we’ve listed the specifications below:

Aside from the listed specifications, this headset also offers RGB lighting and 7.1 virtual surround sound audio, as well as its own GH-S5 Scepter Sound Software for altering various room effects. 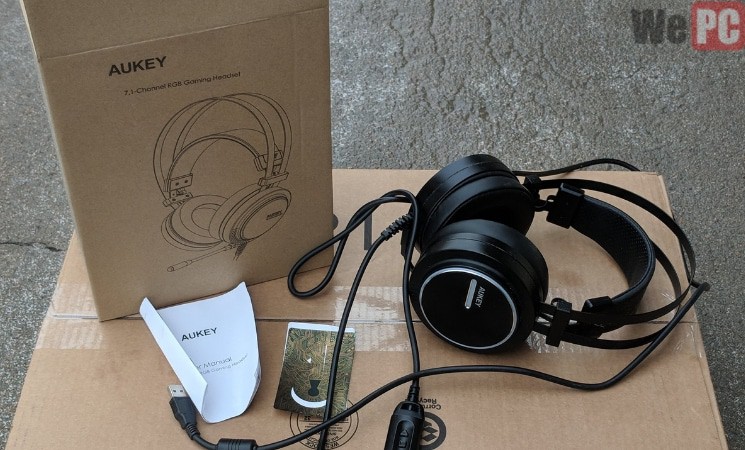 In the box is the headset itself, the warranty, and a user manual. Pretty much just what you’d expect, though the warranty sticker is actually…well, a sticker, which I find a little bit unusual. Cool keyhole design, though!

How does it feel?

It feels pretty good. I have a larger head than some, but the headphones adjusted to fit me pretty much perfectly, and I don’t experience any discomfort when using them for prolonged periods of time. The weight is noticeable, especially if you’re used to earbuds or much more low-profile headphones, but not unreasonable at all, and easy to ignore during prolonged usage sessions.

The cushions are quite soft and comfortable on the ear, with the outer earpads being constructed of some kind of hard plastic. It doesn’t feel as premium as steel would, but it also isn’t as heavy and it doesn’t necessarily feel cheap, either.

The real star of the affair is the headphone strap, which automatically adjusts to the size of your head and fits snugly and comfortably.

The one caveat– and the thing that bothers me the most– is that the headphone cable comes out of the left side of the headset. This is admittedly specific to me and my setup, but because it comes from the left side it’s more inconvenient for me to route the cable appropriately without disrupting my desk since my PC is to my right instead of my left. This is ultimately a minor and manageable nitpick, but plenty of headsets do allow you to just move the cable, so it is still worth noting.

If I were to rate the overall comfort of this headset on a scale of 1 to 10, I’d place it at a solid 8. I’m sure there are improvements to be made, but for what I’m getting I certainly cannot complain.

In terms of basic usability, there’s nothing really wrong here. Headphone adjustments require pretty much no effort on your end (besides putting it on your head properly), and the included remote offers access to all the basic functionality you need, including toggling 3D audio, RGB lighting effects, and volume adjustments.

Software-wise, what’s here is pretty barebones. There aren’t any in-depth RGB customizations here. However, there are toggles for your equalizer, your 3D (7.1) audio, and controls for your microphone, 7.1 audio, and even “room” effects. While it’s nice to have all these features in one place, they’re also just about what you would expect from a product like this, sans the unfortunate exclusion of software RGB customization, which we’ll discuss in more detail below.

For now, let’s move on to the quality.

For our testing, we used three different testing methodologies:

Below, we’ll discuss the results of each of these tests.

If you don’t really understand what all of this means, but you’re interested in learning more, then we definitely recommend checking out the Audiocheck.net page. They do a great job explaining each of their tests.

Space Song, by Beach House, is a very peaceful and serene song that usually stays on the quieter end, but occasionally gets a little lower. Its instrumentation is very obviously synthesized, but ultimately clear and soothing. Compared to other headphones I’ve listened to this song on, the GH-55 provides a better-than-average listening experience, especially when compared to earbuds or cheaper headphones.

Dictator, by Scars on Broadway, is a loud, angry song. It’s full of aggressive drums and electric guitar, and it shines on this headset when compared to other ways I’ve listened to this song. If I had to hazard a guess why, I’d say it’s because of the size and power of the drivers, making this headset particularly well-suited for listening to loud music. The subtler details, like the background instrumentals, also remain audible on this headset.

Overall, I’d say this headset does a pretty good job on this front, especially over headphones in the $30-$40 price range.

Overwatch already does a lot of extra work from a sound design perspective. Unlike many other first-person shooters, for instance, it actually makes your teammates quieter and your enemies louder so it’s easier to hear when you’re being flanked or are about to be attacked from behind. I didn’t really feel a big difference in my situational awareness when playing Overwatch, but I did notice that my auditory mapping of where things were was much better than before, thanks to the virtual 7.1 surround sound.

I saw bigger differences in Team Fortress 2, which also has good sound design, but doesn’t discriminate based on which player is making the noise. I was able to close my eyes and really make out everything I was hearing, which is an achievement in a game as chaotic as TF2, where you often have as many as 24 players being loud in a single game. My old headphones weren’t able to accomplish this nearly as well, and this experience has made me a big believer in virtual surround for gaming purposes.

I found it difficult to get any kind of hard numbers on this outside of the spec sheet, but according to the people I voiced with– both in and out of game– my voice sounded fairly clear. Because of this, I feel confident in recommending this as a gaming headset, especially because I was also able to have clear comms with my industrial fan on at full throttle. (Though in that particular scenario… you’ll still want to use push to talk.) 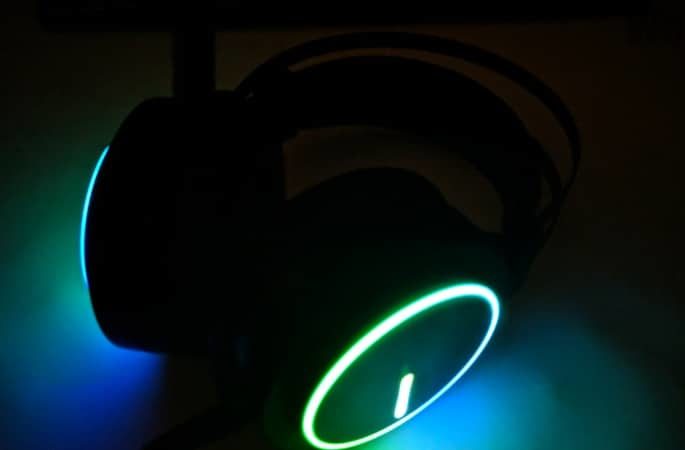 Now, it’s time to talk about the extra features…namely, the RGB. The RGB lighting on this headset seems to come in four modes:

Of these four modes, I took to “Rainbow” as my personal favorite. Where I took issue, however, was with the lack of customization beyond these four options, which you have to toggle through on the included remote and aren’t described in the manual (In fact, the above names are unofficial, courtesy of me). While I find the RGB features to be generally aesthetically pleasing, I’m still frustrated that there aren’t any software controls for them, especially since the spectrum of color that this headset goes through seems to be quite wide.

Additionally, I’ve noticed that sometimes during prolonged usage the effects stop synchronizing across both sides. When they start, they are synchronized, and when they’re reset, they’re synchronized; but for whatever reason, after a certain amount of time has passed, one of the headphones will be noticeably behind in the cycle when compared to the other one, up to a full second behind.

If you’re a stickler for RGB and you really want complete, in-depth control of your RGB setup, these headphones aren’t going to provide that experience. What controls are there are far too limited to do that. If, however, you just want some nice-looking headphones and can appreciate the color-rotating scheme, then these should be just fine for your needs. 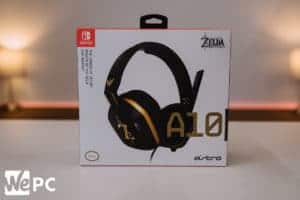 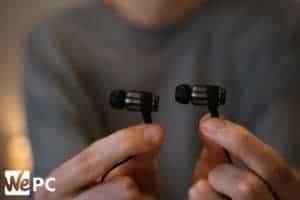 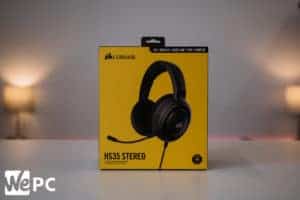 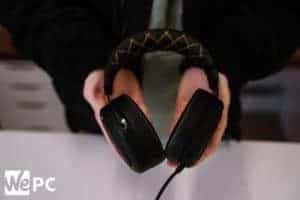