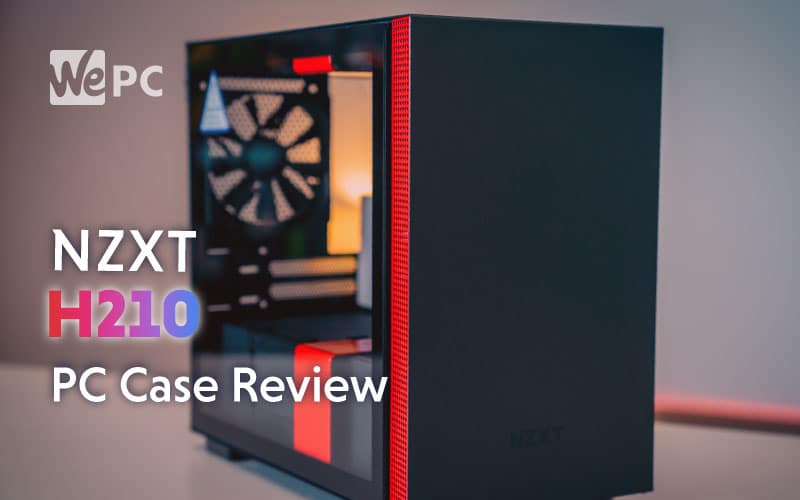 NZXT’s H-series are expertly made PC cases with some excellent features at an affordable price. This line of cases doesn’t really need an introduction but in today’s review, we are looking at one of the brand’s smaller form factor offerings, the H210.

The NZXT H210 is a Mini-ITX-only version of the H510 and the smallest in this product range. The H-series has become one of the most iconic lines of cases of recent years and this latest refresh doesn’t disappoint.

A mini-ITX case with plenty of room to water-cool, Let’s take a closer look at the big mini. 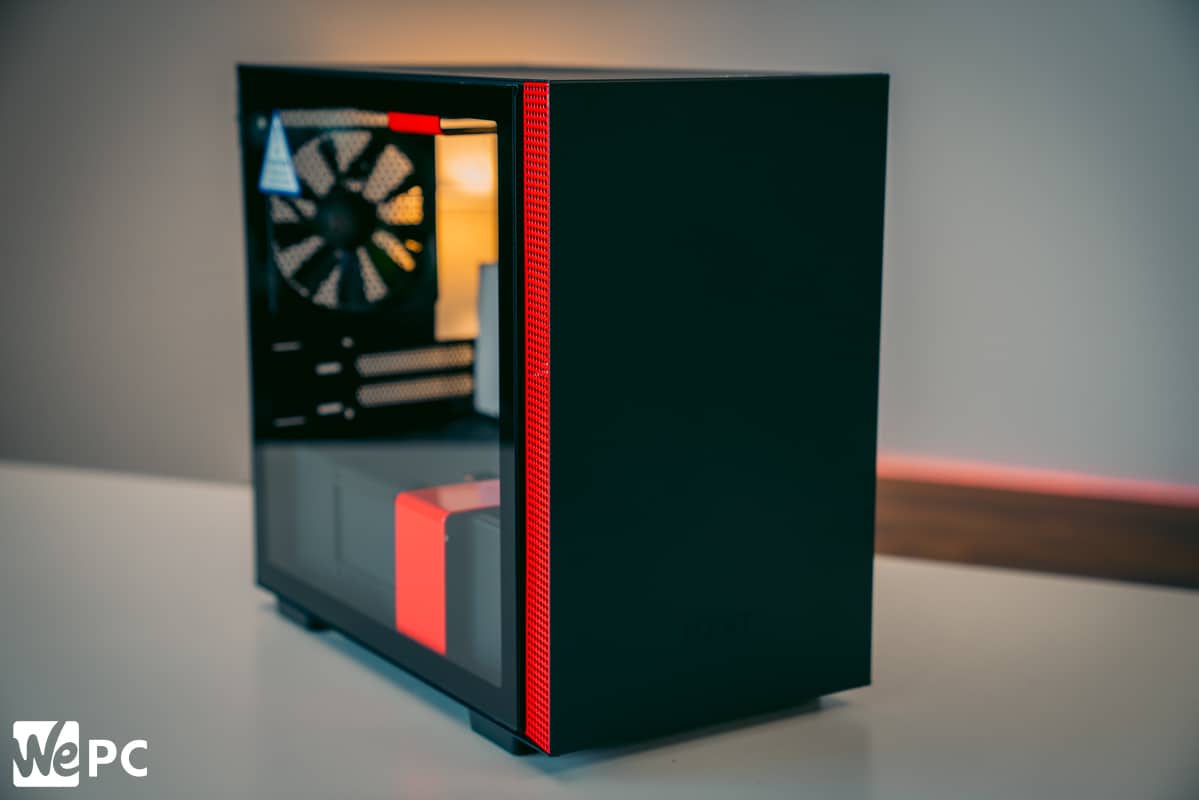 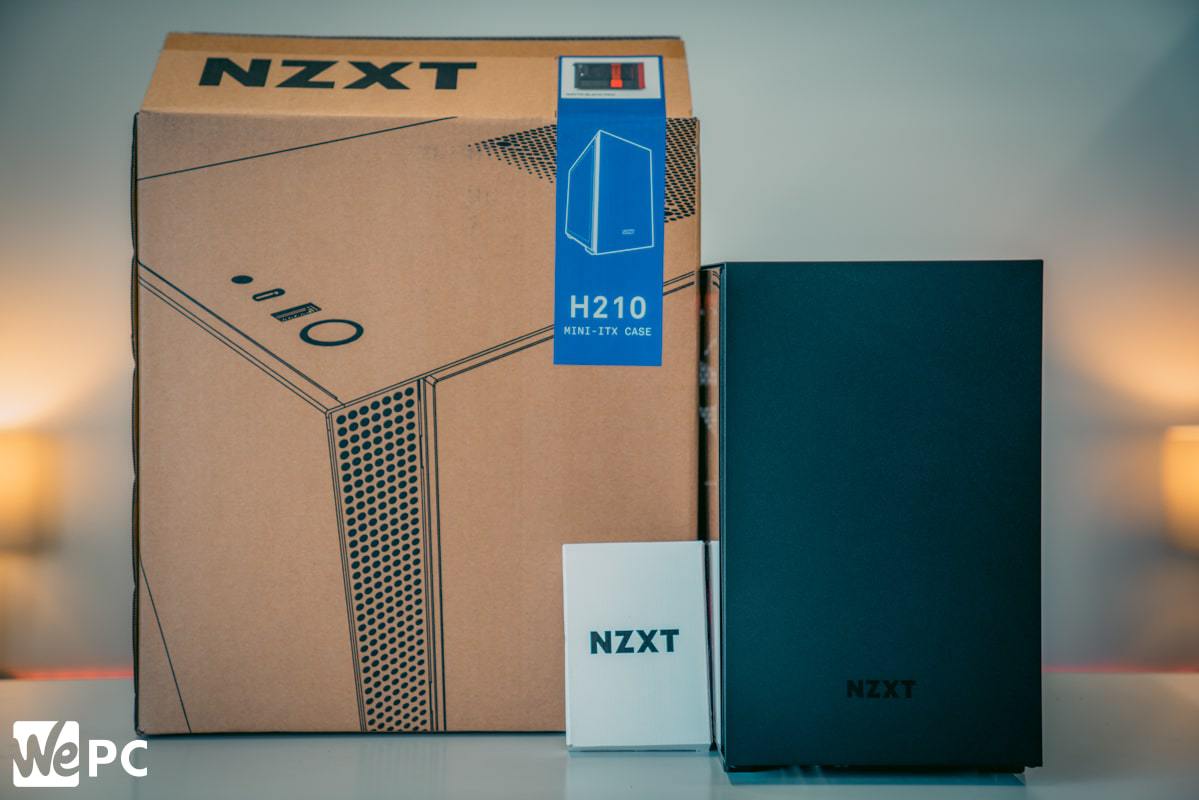 Out of the box, you instantly spot that NZXT design and not only does it look like its bigger brothers (H510/H710), it looks like its predecessor, the H200, too. Now there are a few subtle changes to NZXTs latest refresh, which I will touch up later but overall this is an exquisite looking PC case.

We have the black and red model here but from the front, you wouldn’t be able to tell it apart from the H510 if it wasn’t so small. This identical chassis has that same matte black color and grainy texture, with a subtle logo that is barely visible see at some angles. 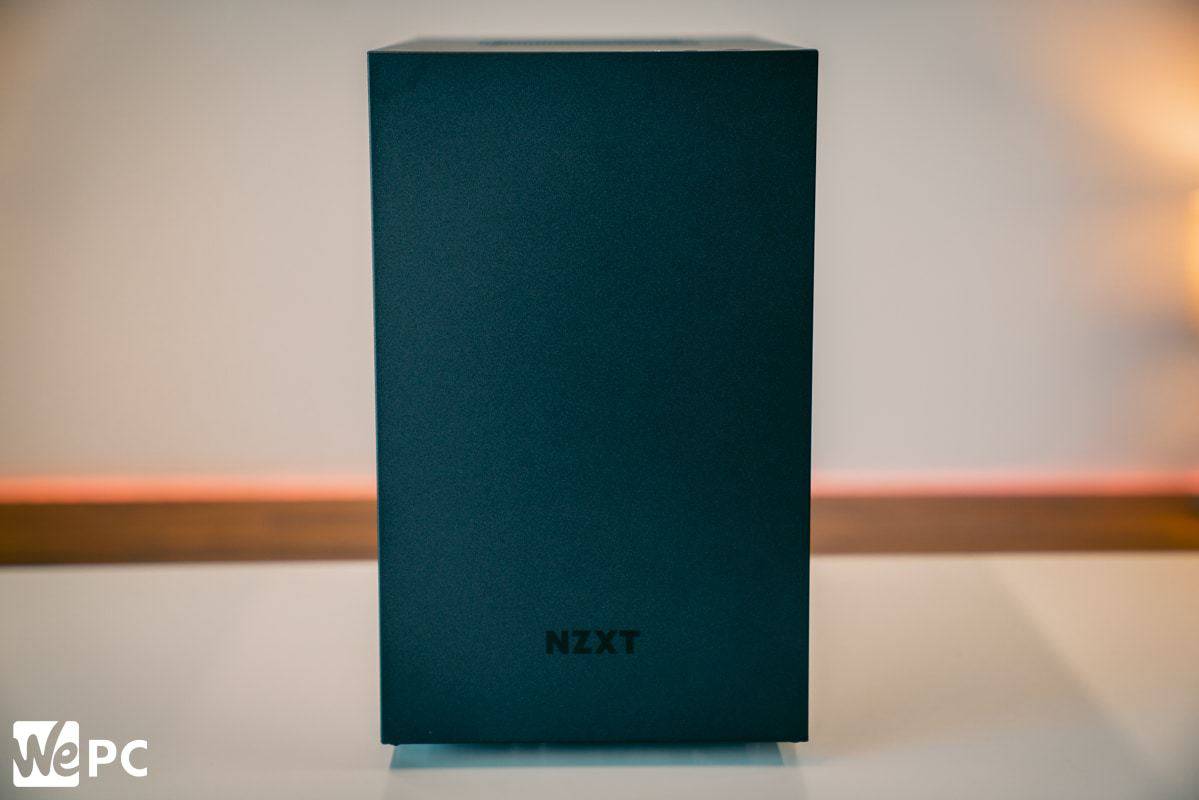 The back of the case is quality, but as boring as the H510, with a few minor differences. We see the same 120mm fan vent near the top, however, this time you only get two expansion slots for your GPU. So if you are someone who uses a Wi-Fi card you are going to have to ensure you get a motherboard with onboard Wi-Fi or use a USB adapter.

Down at the bottom, you have to remove the PSU bracket which has been included in case you would like to install an SFF power supply. This bracket was hands down the hardest thing I have ever had to unscrew on a case before, so be prepared for that one. 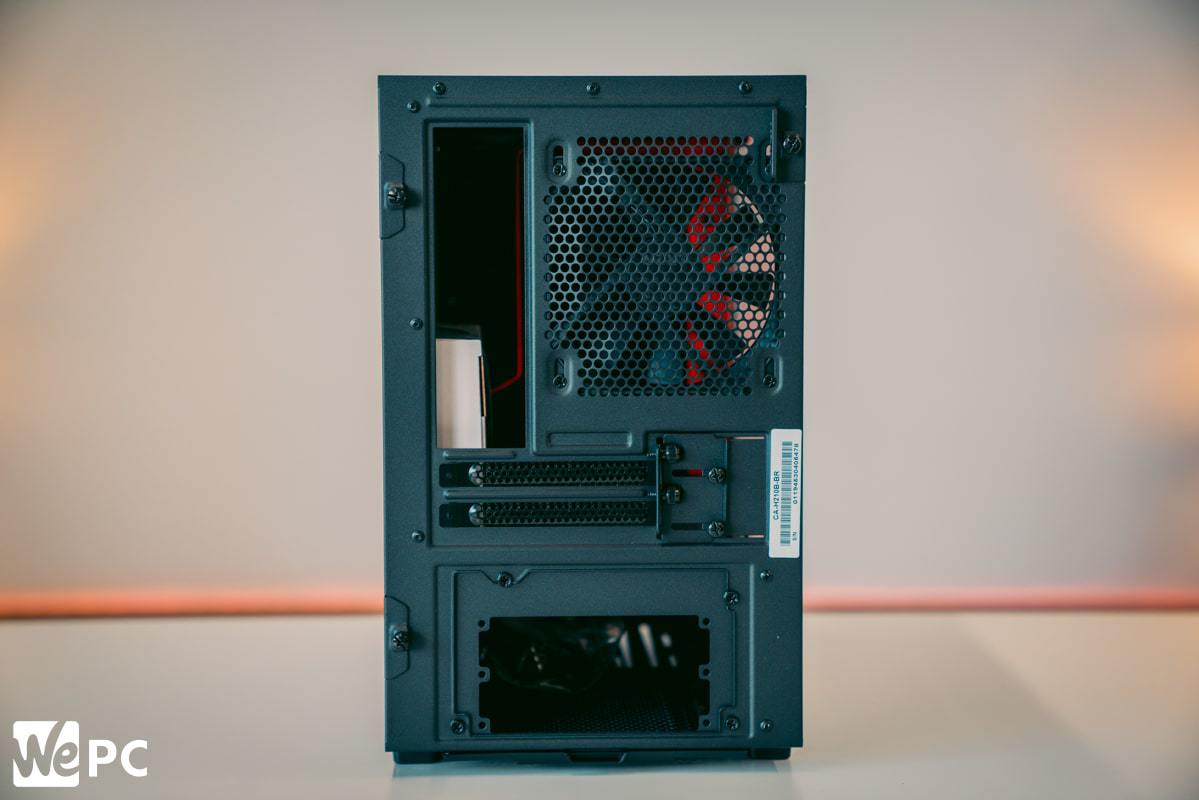 The tempered glass panel side window comes off very easily and it’s one of the more user-friendly panels I have come across. You simply undo the single thumb-screw (ouch) and then it pops out nicely. Towards the front, is a large red piece of steel with ventilation running all the way down. This is one of the few flourishes of color and spots for the rear fans to draw air. 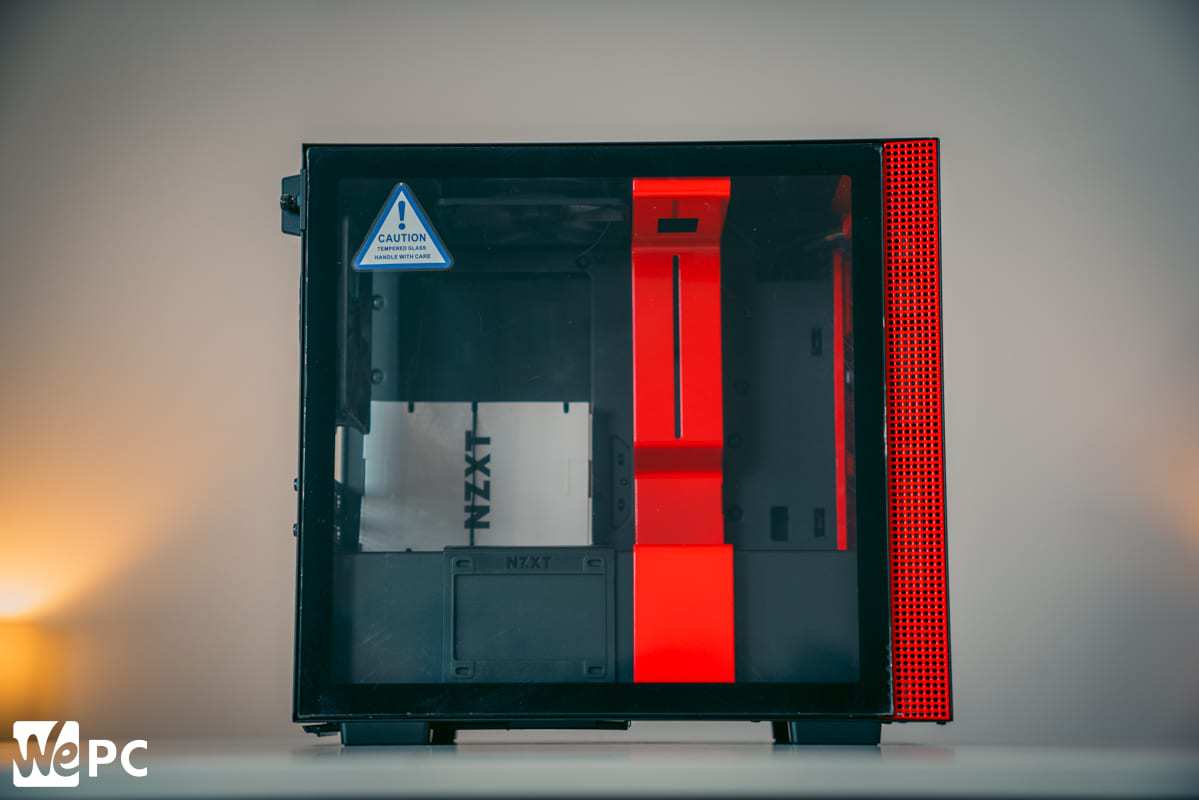 The top is identical to the H510 only this time no flex at the fan vent. The vent is for another 120mm fan but there is only one position for it to be screwed in, unlike the back. The case is very simplistic and the I/O ports follow this trend. 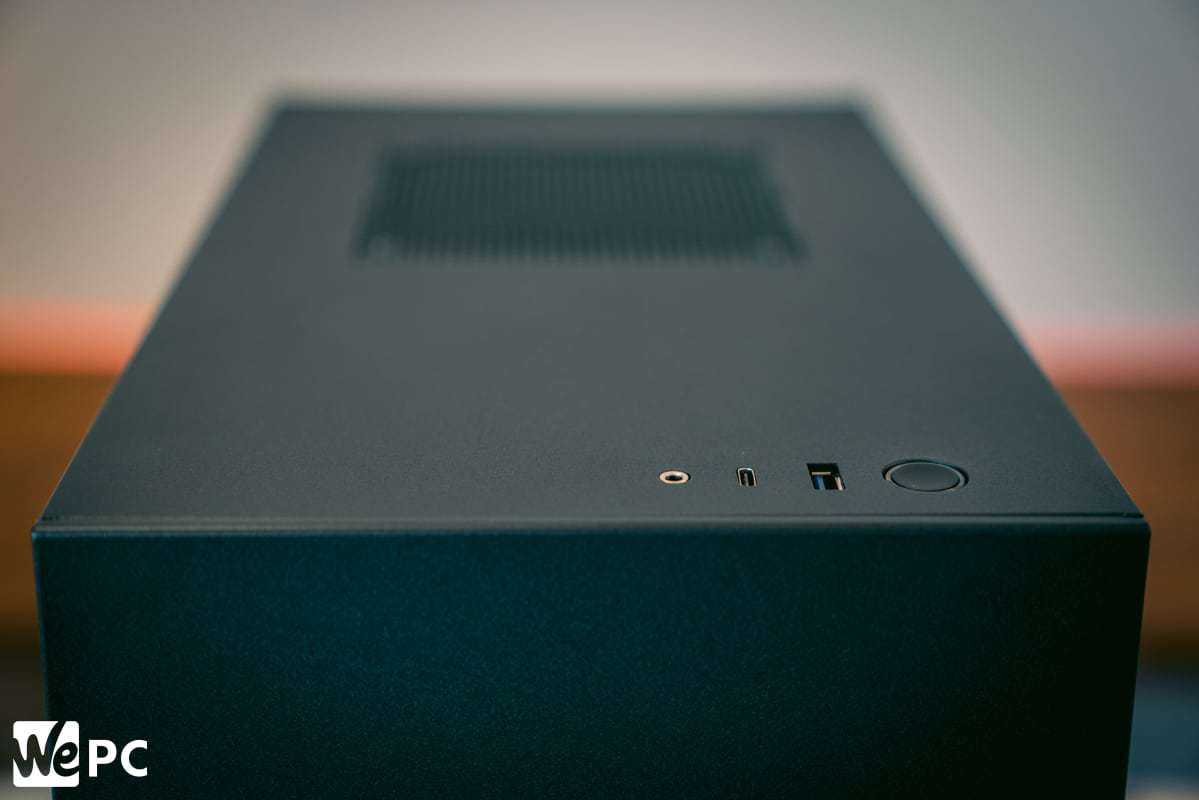 Due to this being a headset jack there is an included splitter that comes in the screw bag, so don’t worry. It would have been nice to see a few more options on the front but this isn’t something that affected me and I really enjoy the clean design of this case.

The inside is much like the older H200 and the bigger H510, with a few obvious differences due to the form factor. The interior is large for a mini-ITX-only case and this space gives even water-coolers plenty of room to go quite aggressive on the cooling.

With the H-series, there are large cutouts that are cleverly hidden with the design of the case. So no need for grommets but we see the cable bar which once again, looks superb. The cable bar is NZXTs final flourish of red on this model and it does more than just neaten up your build. The cable bar is a great spot to mount your reservoir and like the other models, you can completely remove it if you wish. 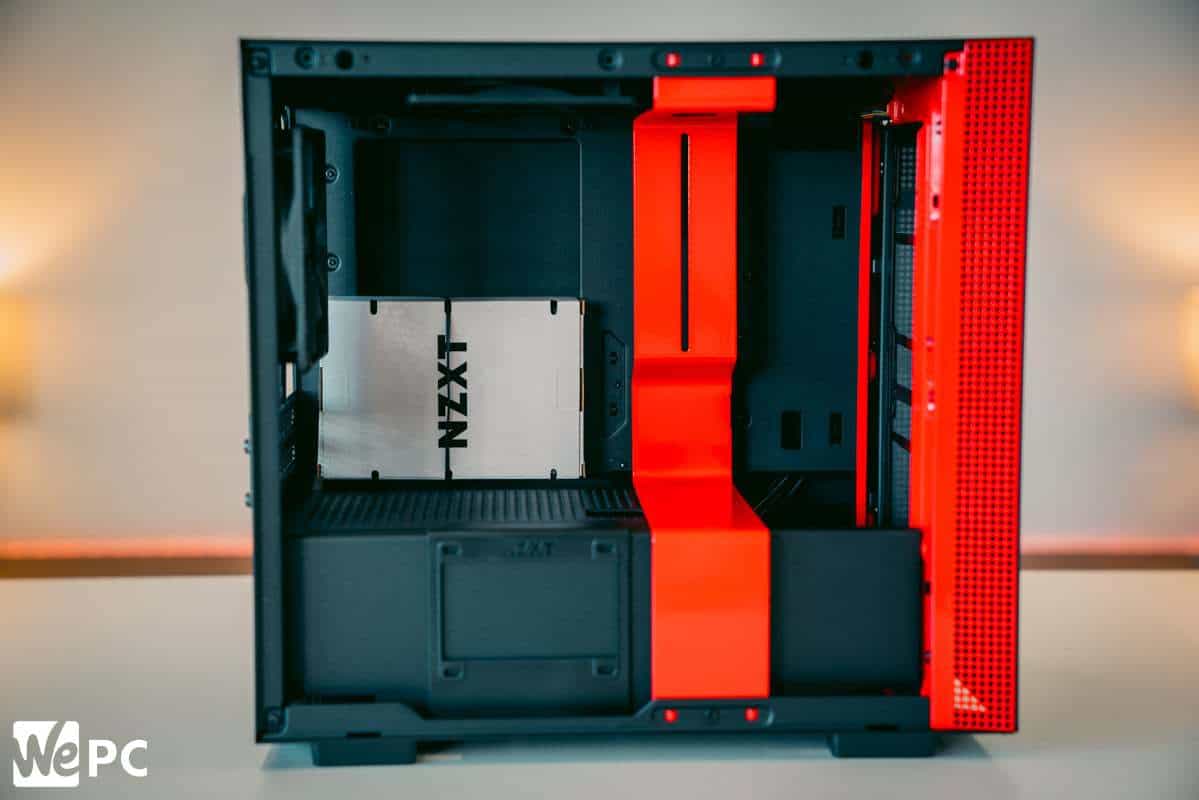 This case is Mini-ITX only and even that’s a bit of a tight squeeze. Don’t worry, everything fits but you may have to remove the rear fan to plug in your CPU power. Of course, the layout is completely open towards the front end so make sure you tidy your PSU cables properly as you do not want to ruin the clean nature of this NZXT case. The front panel also comes off to reveal the radiator bracket and included dust filter. You can squeeze a 280mm radiator on the front or install two 140mm fans, generous for a case of this size.

At the bottom, we see the familiar PSU shroud with the GPU cable cutout in the appropriate place. During my build, I used a full-sized turbo RX 5700 XT, so I needed to run the cable down the open end which looked much cleaner. Clipped onto the PSU shroud sits a small plastic bracket that you can mount a 2.5” SSD onto and is quite a useful way of getting some extra features in. If, like me, and you want to keep your mini-build as clean as possible, then it is probably best to go for M.2 storage or use the SSD brackets at the back. 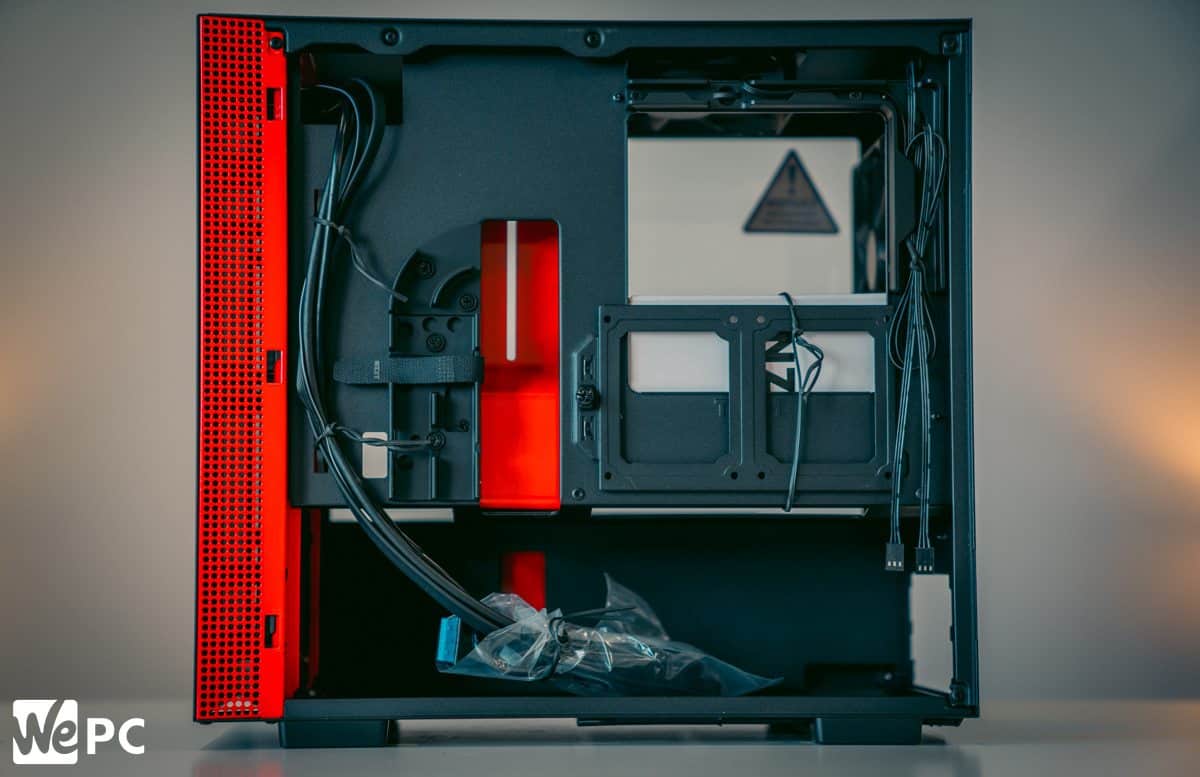 As mentioned, there are two more spots to mount 2.5” SSDs and that’s your lot, no HDD cage in this build. Like the other H-series case, the front panel cable is now all one, which was actually a godsend in this mini-ITX case as my hands barely fit inside.

The NZXT H210 offers almost identical features to the bigger H510. A big thing to note with this case is that if you plan on going for this version, make sure your motherboard has enough fan headers! If you are unsure, or just want an easy life, then just get the more expensive H210i and put that smart device to work.

Design – Nzxt has managed to follow that same minimalist and clean look they have achieved with their other cases and fit it into something as small as this. It’s incredible and easily one of the best mini-ITX cases on the market, plus the layout is still very logical. I think the discrete nature of the case contrasts so well with the burst of color from the cable bar and when you’ve got a system in here, just wow. Of course, it isn’t just visually pleasing, it’s easy and somewhat satisfying to build in, even when compared to some bigger competitor cases.

Airflow – Due to the form factor, this will run hotter than standard mid-towers but as long as you slap an AIO on your CPU or fiddle with the configuration, you should be set. As mentioned, this is a superb mini case to water-cool, with the results often being phenomenal. Regardless, you get two preinstalled Aer 120mm fans inside and decent enough out of the box performance.

USB Type-C – While this type of connector is widely used now its one of the main features when comparing this to the older H200. This modern type of connector is great but again, make sure you have a motherboard to support it otherwise just grab yourself the older model. It’s great having this at the front, but it isn’t as important as some of the larger cases we have reviewed as this case would most likely be sat on your desk rather than underneath.

If you are on the lookout for the smallest possible Mini-ITX cases like the Thermaltake Core V1, then the NZXT H210 is probably not for you. This is certainly on the larger side of the category but it is still considered small. That being said, you will struggle to find a small form factor case that looks as good as this does, the Fractal Design Nano S, for example, is nowhere near as aesthetically pleasing.

The slightly bigger H510 from NZXT offers the better value but if you are building a new mini rig, the chances are that value is not high on your list of priorities. As previously mentioned, for an easier life go for the H210i with the new and improved smart device but be prepared for the price hike.

Overall, this simplistic case is a beauty and is my favorite in NZXTs H-series.

What chassis did you go for to complete your small form factor build? Head over to the WePC community and share your mini-ITX experiences with us!

The smallest in the H-series range, the NZXT H210 is a mini-ITX master.