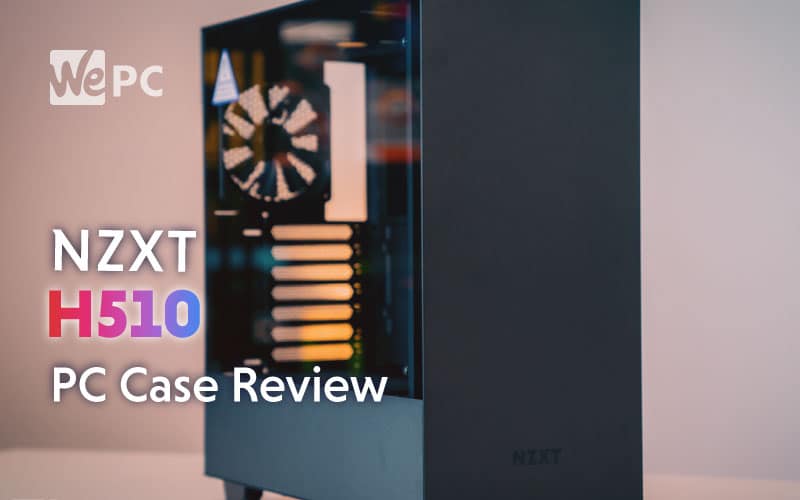 NZXT’s H-series PC cases are some of the most highly regarded out there amongst the PC building community. These sleek cases are known for their high-level build quality, ease to build in, and value.

Today we are going to be reviewing the NZXT H510, which is technically the “base” model but this is far from basic. The H510 is essentially an upgraded H500, only with USB Type-C and is the “middle child” of the series. This mid-tower sits in between the larger H710 and the mini-ITX H210 cases, making it one of the more popular options from NZXT.

This NZXT refresh is available in a variety of colors, special editions, and alternative models, with the more expensive “Elite” and “i” models featuring RGB fans and an updated fan controller respectively.

Anyway, let’s have a look at what makes this all-round excellent case tick. 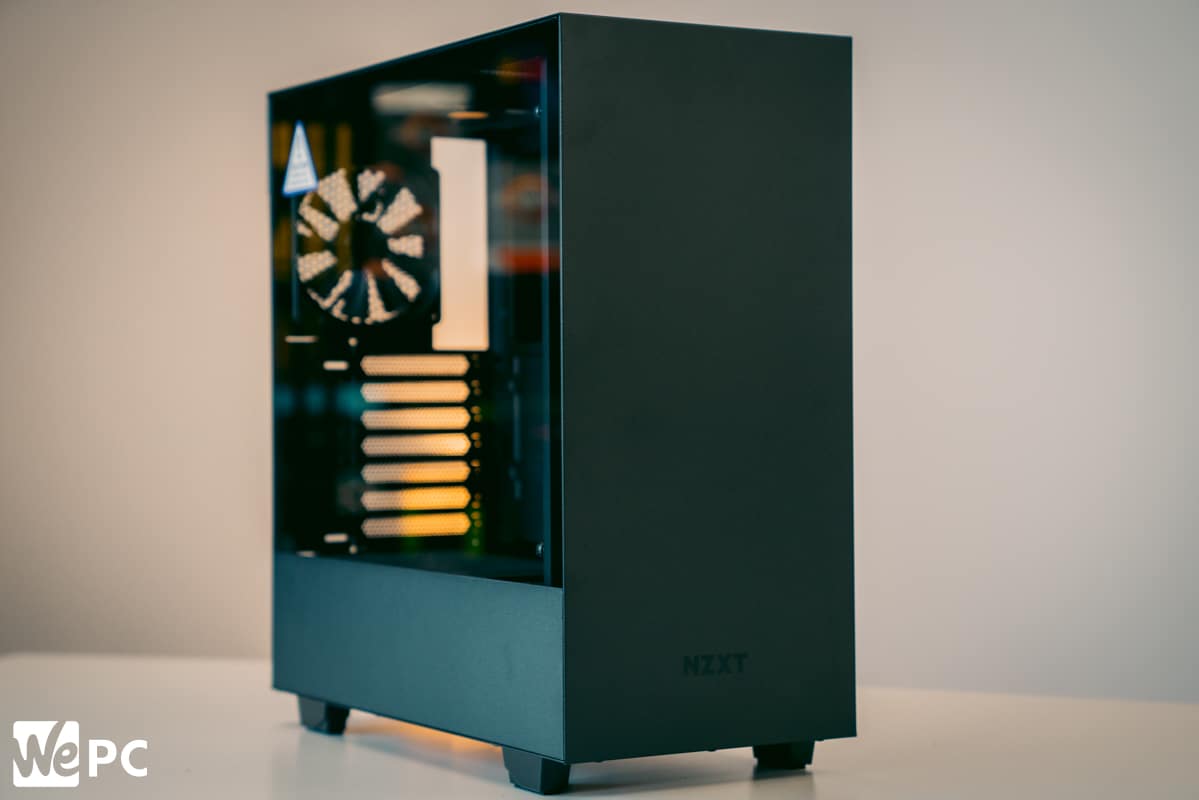 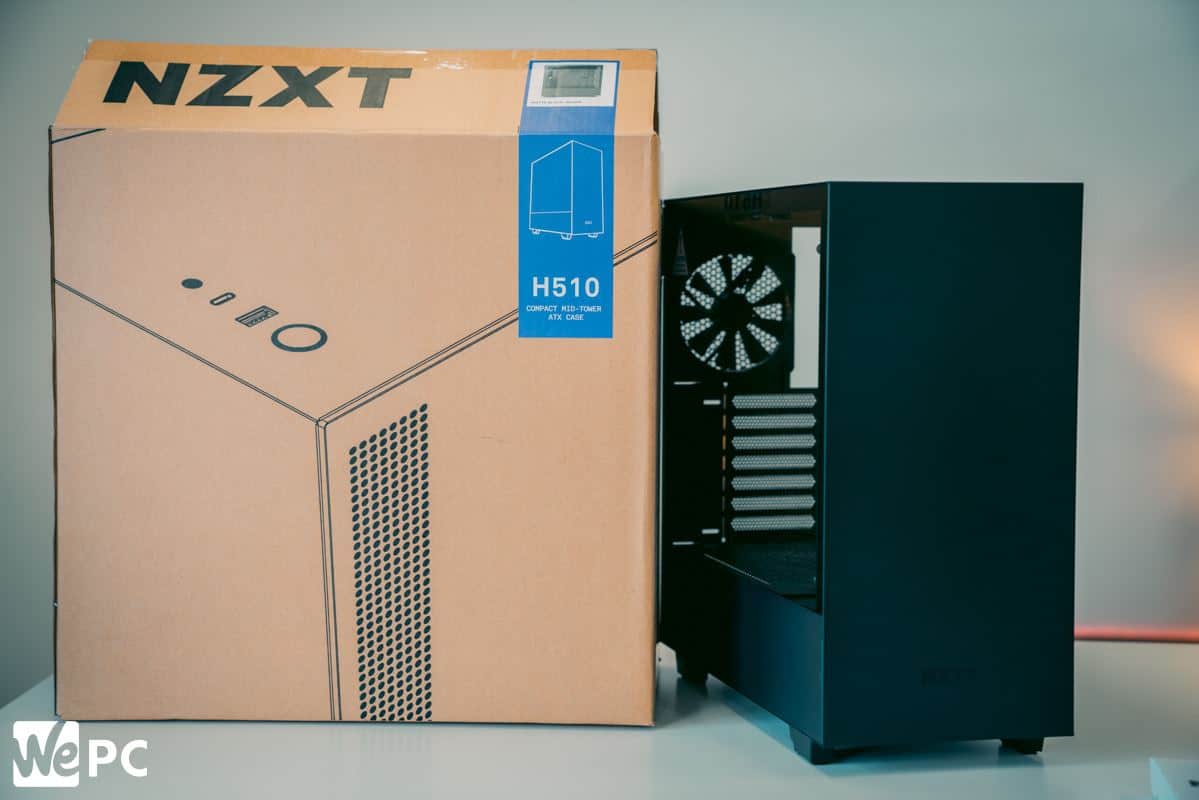 The design on the refreshed NZXT H510 case is still as sleek as its predecessor, with a matte black, grainy finish. Of course, this texture is one that can attract dirt and often struggles to hide scratches but it is so much better than the glossy alternative you get with many cases. The Elite model features a tempered glass front to show off included RGB fans, whereas this version is a clean featureless panel that oozes class. 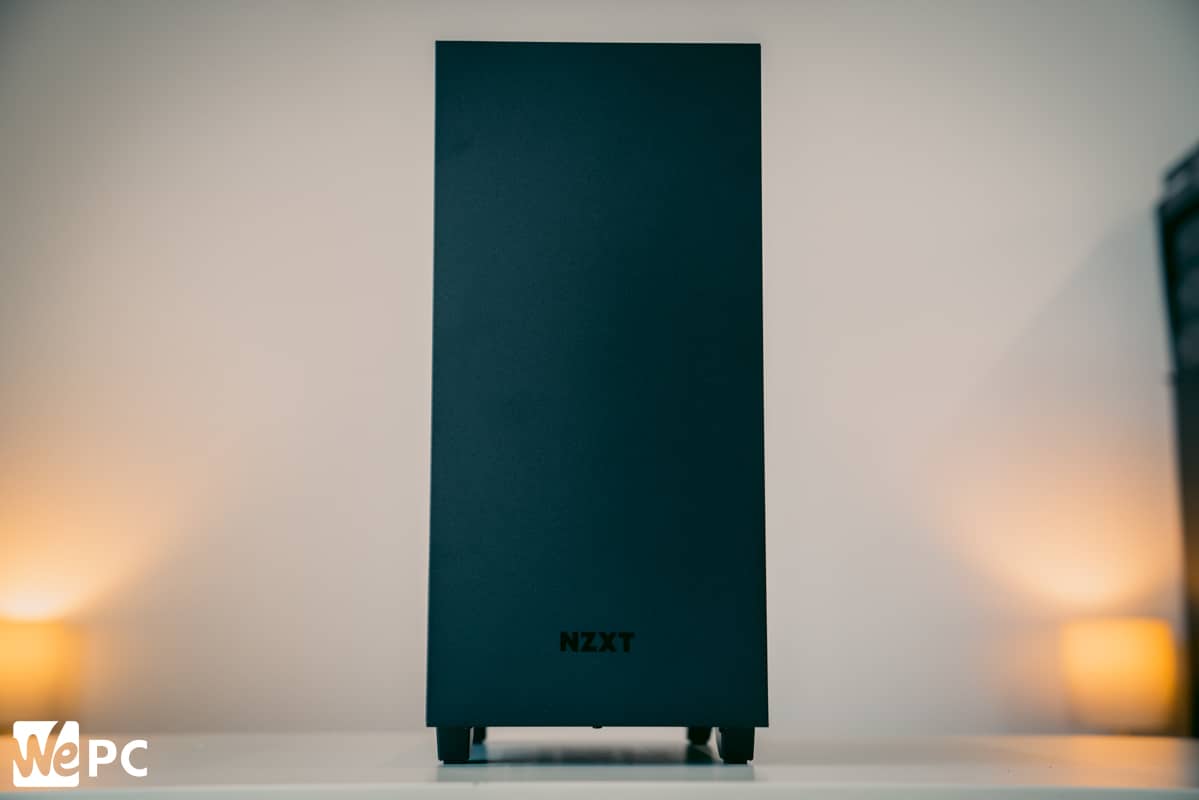 At the back, we see a fan vent for one of the included 120mm fans, which is as big as you can go in the fan department here. You get your standard seven expansion slots at the back plus a double slot for vertical GPU mounting if you remove the pre-attached bracket.

Aside from that, there is little to talk about at the back other than the premium feel continues here too. 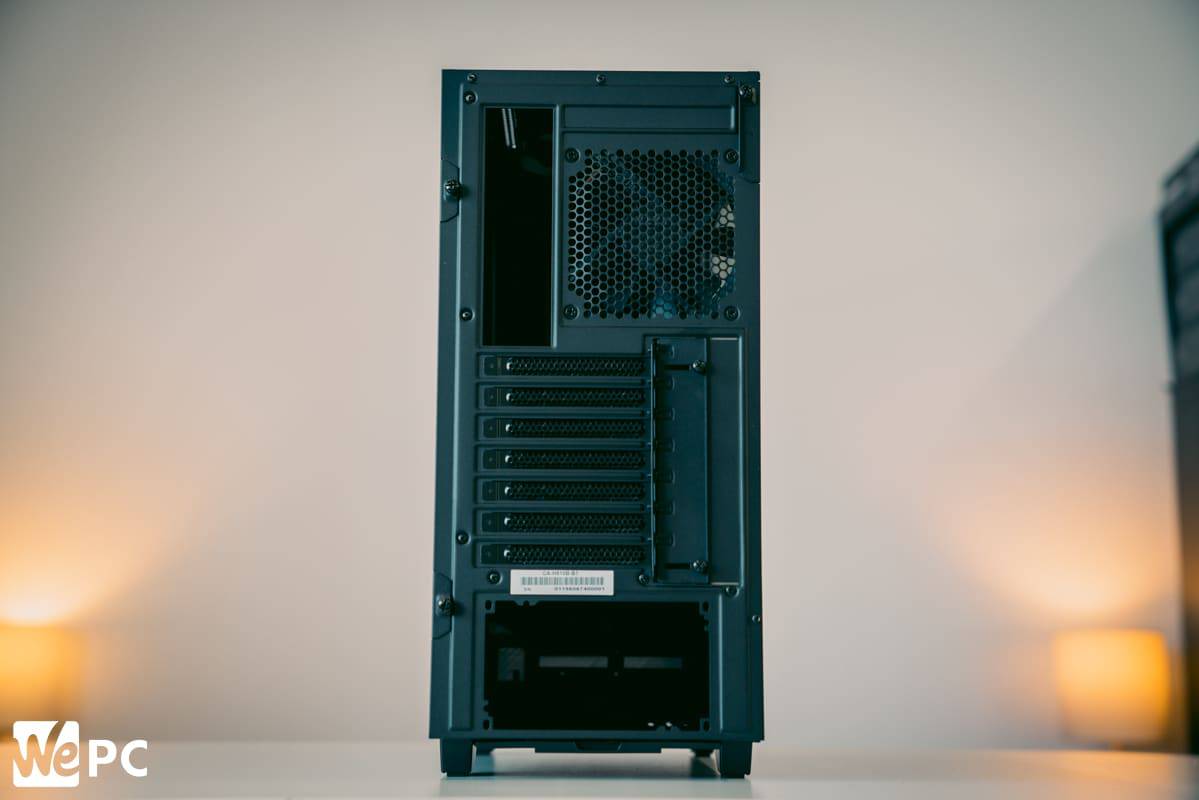 Despite being quite simplistic in its design you instantly know you are dealing with an NZXT case, with the sharp box-like angles and a small slither of visible ventilation. The tempered glass panel is slightly different from other cases as the bottom quarter is actually part of the PSU shroud leaving the glass completely separate. 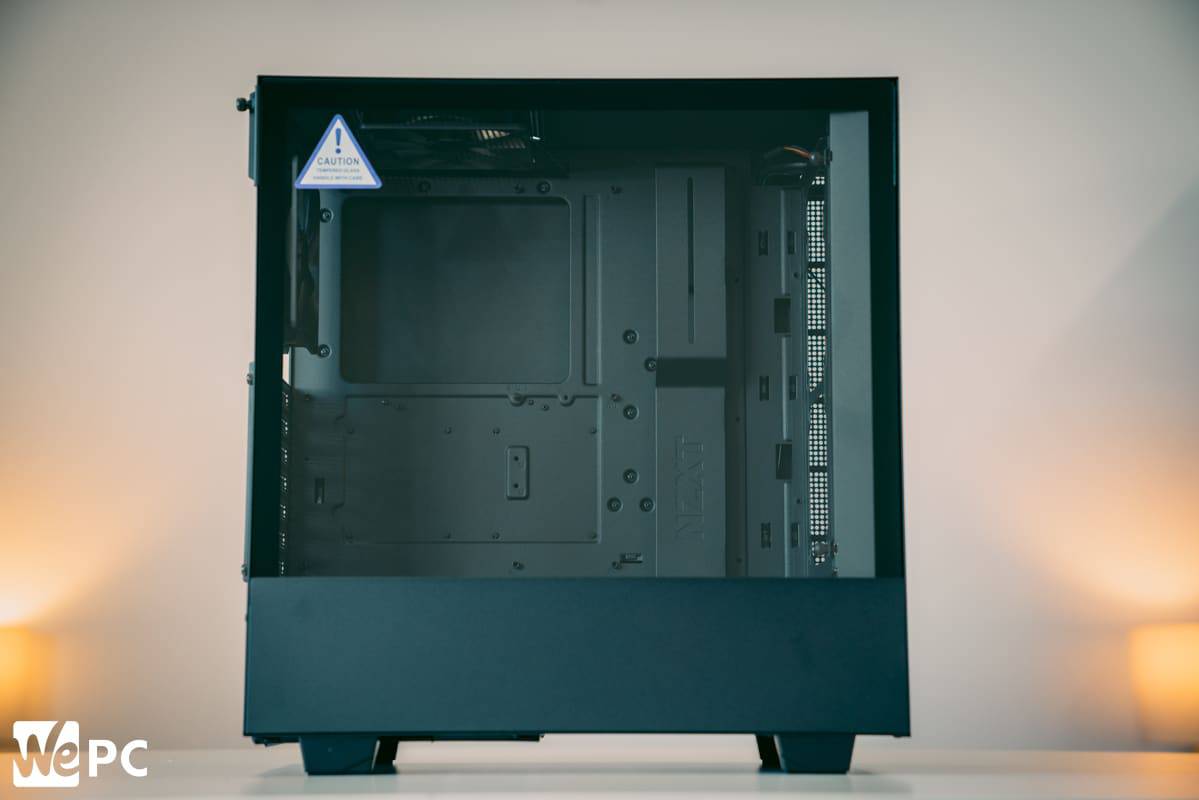 The panels come off relatively easy, once you get past the thumb-screws, which, unsurprisingly, shredded my skin, so get the screwdriver out. The tempered glass side shouldn’t just fall out, thanks to the push-to-lock mechanism but be careful afterward! The back panel featured a small amount of ventilation at the front, which is where the negative pressure setup is going to be drawing air from. 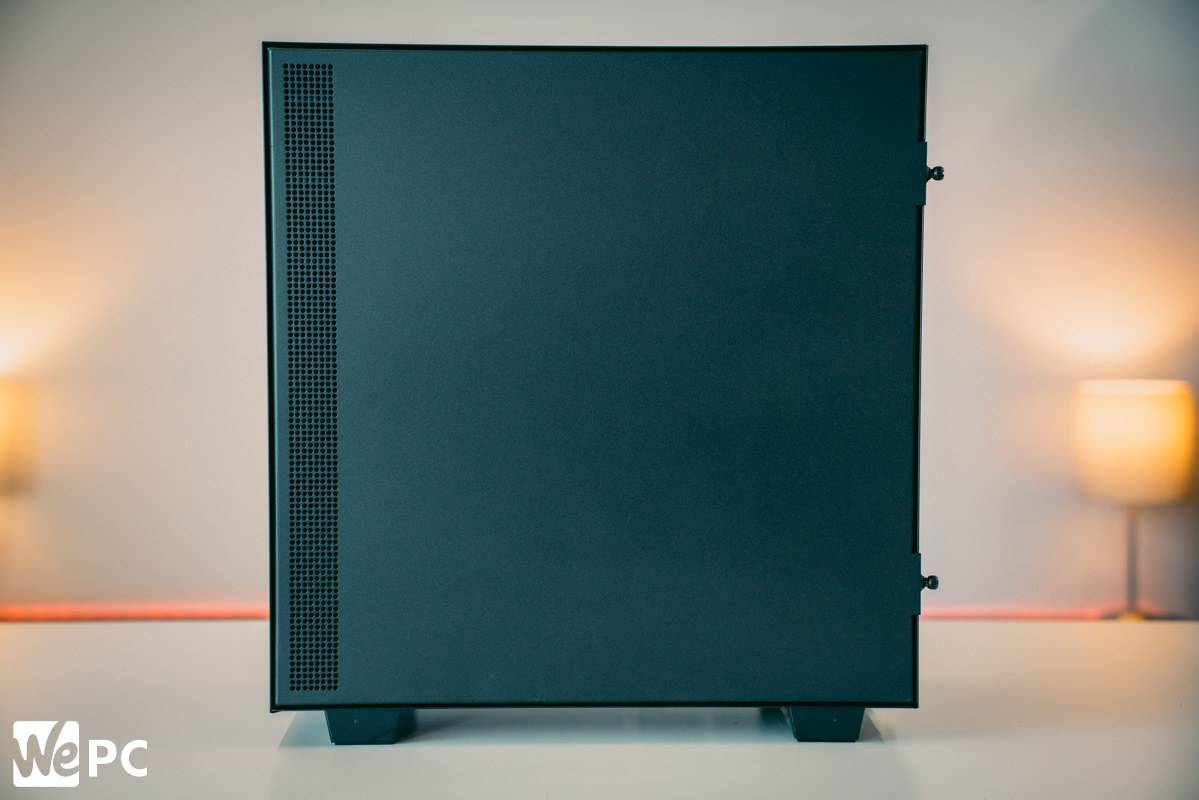 The top follows the rest of the case’s design; it’s minimal. This is a design choice I quite like, with just a single 120mm fan vent showing towards the rear of the top section. The only gripes I had with the H510 were at the top of the case, unfortunately. The rear fan vent has an insane amount of flex in it compared to the rest of the case which pops in and out. Now, it only moves when I press it so don’t let it put you off, but I had to find something wrong with the near-perfect H510.

The second issue I had actually doesn’t really affect me personally but it’s the front panel I/O ports; or lack thereof. 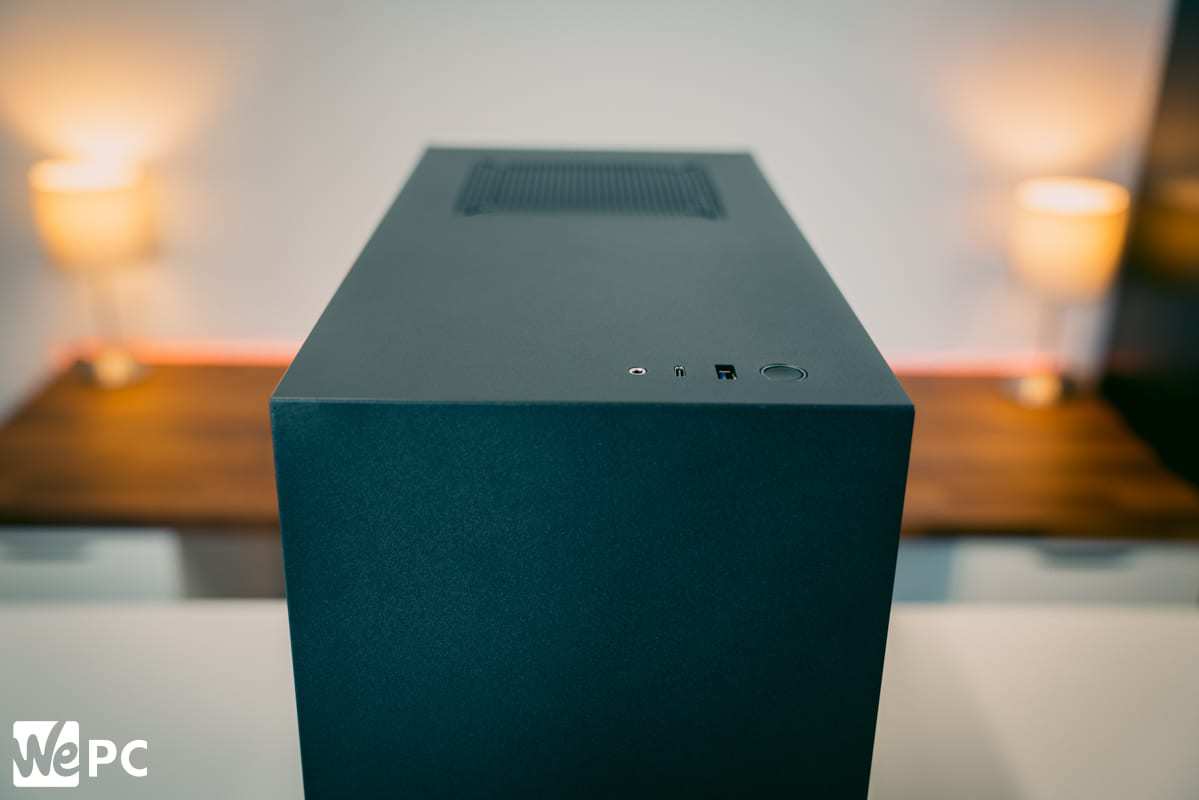 Now, I could argue this is enough ports on the front, plus it keeps with the overall minimalist design of the case. NZXT is far from stingy, you get a lot for your money with the H-series, for example, an included audio jack splitter, but I would have liked to have seen a few extra ports here.

If you are familiar with the predecessor, the H500, then there is nothing that will shock you in this refresh. Regardless, the interior features a logical layout and a surprising amount of room for a mid-tower, or at least that is how it feels.

You don’t get any cutouts with rubber grommets on the NZXT cases, instead, there is a large cable routing slot that is cleverly disguised by NZXT’s trademark cable bar. The cable bar will normally have a contrasting color if you choose one of the models that aren’t jet black and really is an aesthetically pleasing feature. That being said, it isn’t just looks on offer here. The cable bar expertly hides the cables but also acts as a space to mount your reservoir for the water-coolers out there. If you needed extra space inside the case this cable bar can also be entirely removed. Well played NZXT. 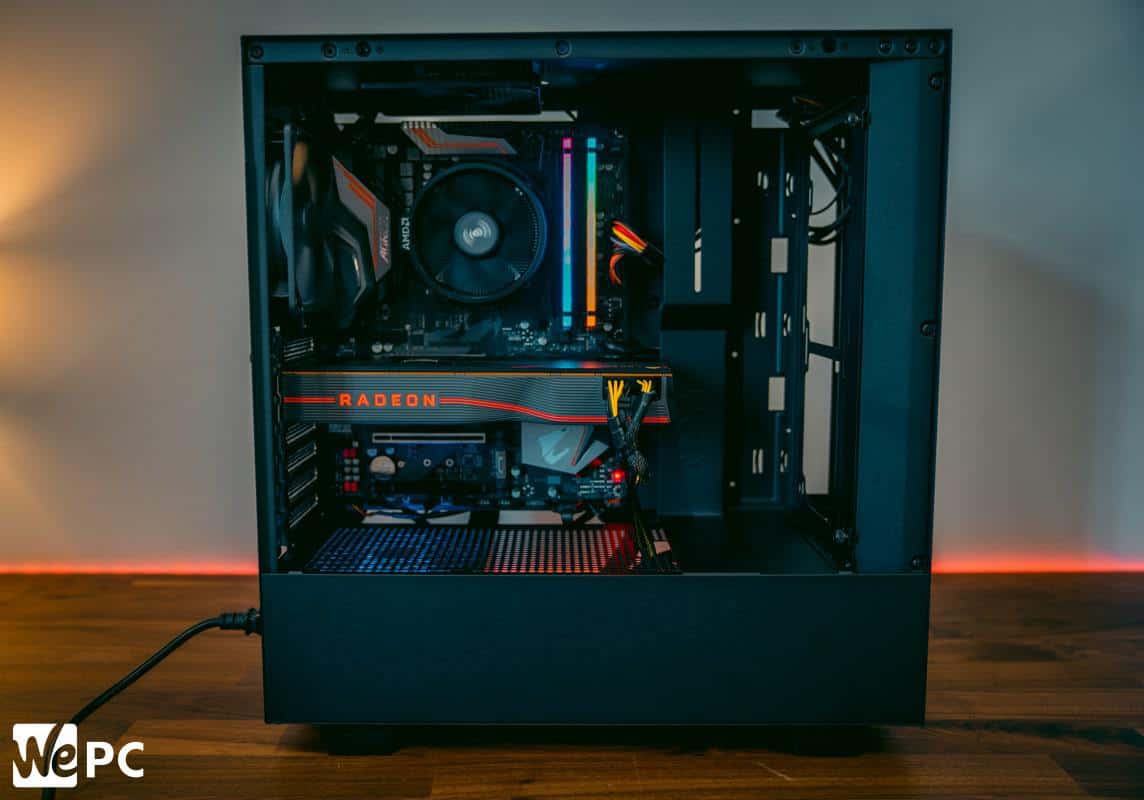 You can install motherboards from Mini-ITX up to ATX in the H510 but I found ITX boards look a little lost, even though it isn’t the biggest enclosure. Furthermore, the interior is completely open, so don’t expect some kind of crazy HDD setup in a case like this.

Towards the front, we see a removable bracket for fans if you wanted to change the airflow configuration or mount a radiator. This just simplifies the installation process, especially when dealing with an AIO cooler. The front is the only spot you can install 140mm fans and there is also room for a rad up to 280mm. 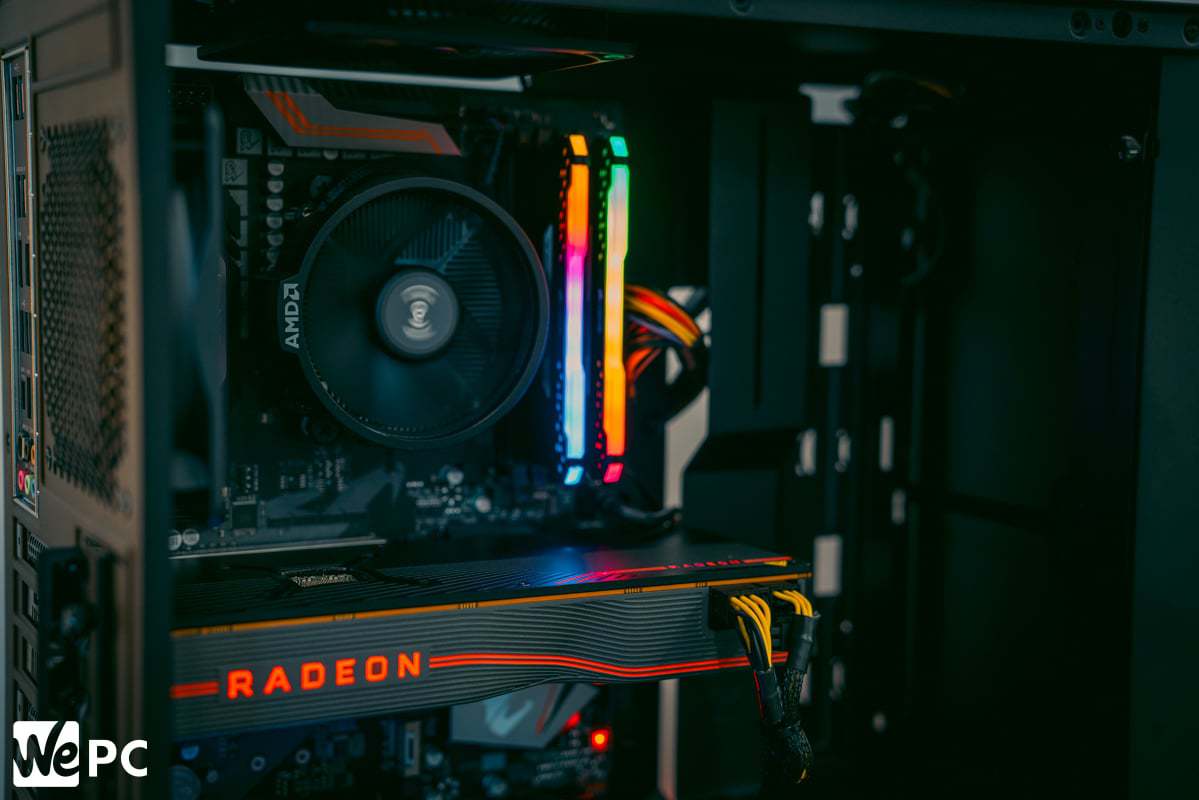 Towards the bottom of the case, we see the classic PSU shroud which serves a couple of interesting purposes besides hiding the nest beneath. If you were planning on water-cooling the system, the perforated section of the shroud is one of three places you can mount the res. There is also a handy cutout for your GPU power, saving you a bit of room at the back and generally keeping the build looking clean inside.

The main talking point to the back of the H510 is the included cable management brackets we see dotted around. Experienced builders most likely wouldn’t care about them and they can be removed entirely quite easily if you are one of them. That being said, I was able to cable manage the PC with no tools and if I wanted to rush the process, I wouldn’t need a single cable tie. The system works at the back and encourages new builders to try and manage the cables, so fair play, I’m a fan. 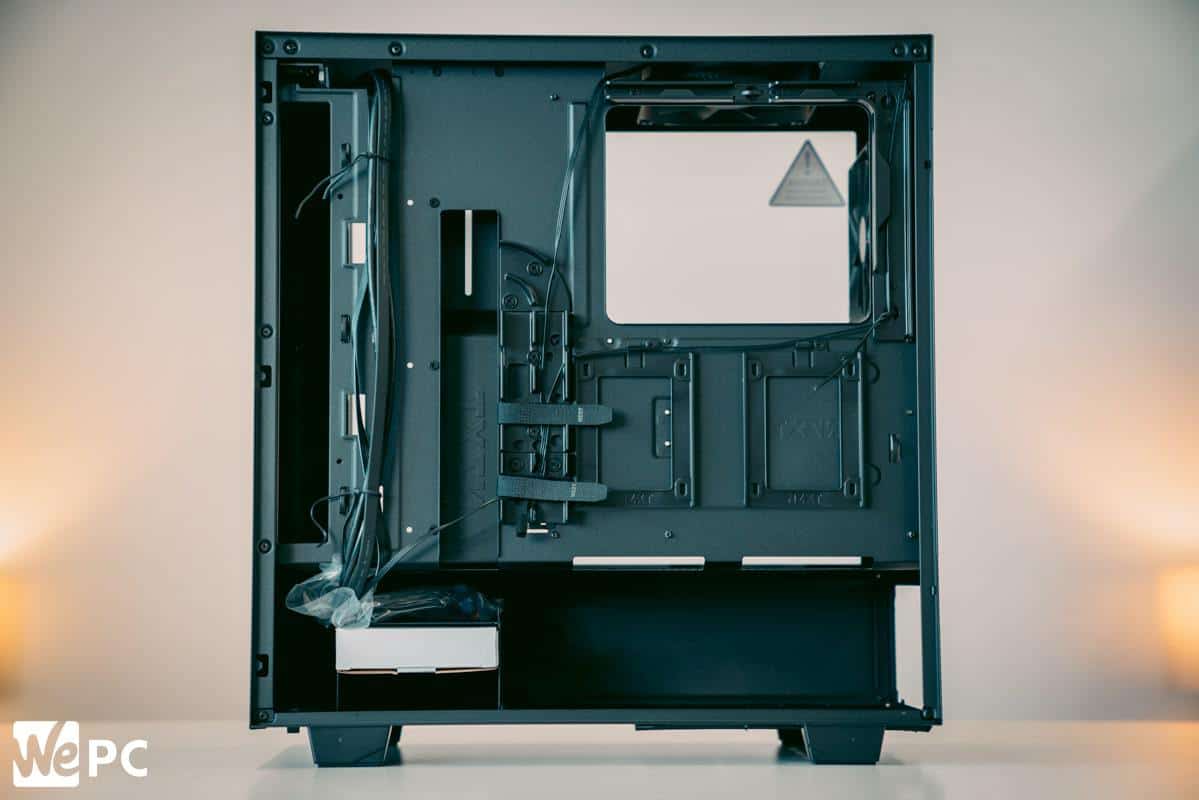 The other main talking point is the wonderful decision to have the FP cables all rolled into one connector, finally. This is down to the fact motherboards are standardizing the FP, so sausage finger builders, rejoice.

Elsewhere, we see the two 2.5” SSD brackets which remain unchanged from the H500 and plenty of cable tie points to prevent the need of tie bases.

Lastly, in the lower section at the back, we see the HDD cage, hidden, as it should be. Of course, the HDD cage can be moved forwards or backward or removed entirely.

NZXT cases are never shy of features but, in general, offer PC builders a high-quality enclosure that simplifies the building process. The iconic H-series cases are some of the cleanest looking units on the market and the H510 still brings the same loveable elements we saw with the H500.

Clean Design – Everything about the sleek H510s appearance is calculated and clean. The professional exterior looks superb when combined with the uninterrupted tempered glass panel. Furthermore, the cable bar and PSU shroud go a long way to making the interior look spotless, giving even the most inexperienced builders something to be proud of.

Airflow – The case is expertly designed and the two 120mm Aer fans that accompany the chassis work in unison to create fantastic airflow. It is worth noting that when it comes to an airflow configuration such as this has out of the box, you can expect dust to build up in unwanted gaps throughout the chassis, so be prepared. Regardless, there are plenty of removable dust filters and a bracket to simplify the installation of a radiator.

USB-C – This type of connector is fairly common among cases these days but when you factor in the price it is yet another feature that makes this a bargain. The Type-C connector is on the front panel, meaning you can easily connect your phone or new gaming headset without having to drag the case from under your desk.

The entire NZXT H510 is feature-packed and it owes its success to the carefully thought out design, get ready for a long line of refreshes on this classic.

So that’s the ins and outs of the NZXT H510, one of the cleanest looking cases currently out there. This base model still offers great value for money, with the “Elite” version being a little pricey to me for just an extra fan and another tempered glass panel, but each to their own.

Just like its predecessor, the H510 is a solid case, it’s been well constructed and reliable materials have been used throughout. If you are going to be adding an AIO or extra fans you are definitely going to want to consider the H510i though. From water-cooling to budget builds, everything will look amazing inside this NZXT case, it is truly a mid-tower for all.

The NZXT is perfect for new and experienced builders alike but what is going to be your next case upgrade? Head over to the WePC community and share the next enclosure for your build with us.

A sleek and minimalist case that is incredibly user friendly. The NZXT H510 will make any build look superb.