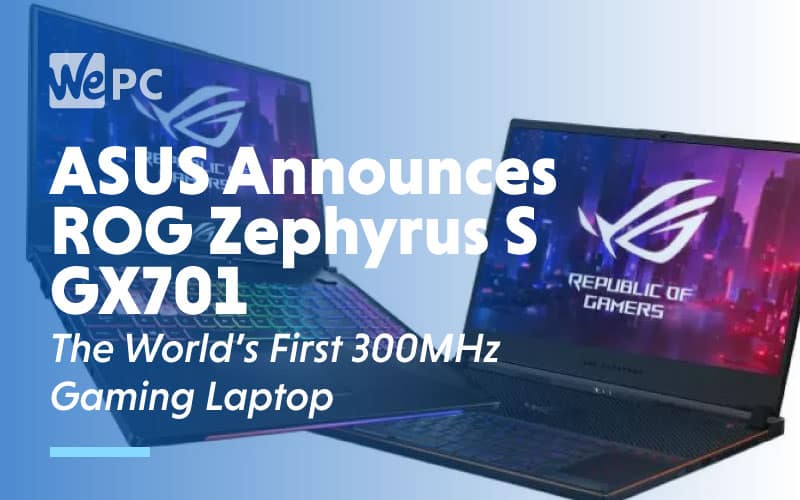 ASUS has announced a brand new laptop capable of a staggering refresh rate of 300Hz. Dubbed the ASUS ROG Zephyrus S GX701, it is the first to reach such a high refresh rate and has specifications to match.

The Zephyrus S GX701 has a GTX 2080 overclocked to 1230 MHz in Turbo Mode, and an i9 H-Series chip CPU. There’s no word on other components but imagine memory to match in terms of quantity and clock rate. The specs are nothing to scoff at and are a prerequisite to getting the most out of the 300Hz.

ASUS says the leap signals a 25% increase on the current highest 240Hz refresh rate standard and equates to five times more frames than standard monitors. The result? Smoother gameplay, better motion fluidity, and improved responsiveness on the player side. By cutting down on the delay between refresh cycles to just 3.3 ms, the monitor can handle GPU-produced frames much quicker, which itself limits stuttering.

ASUS says that it hasn’t skimped on image quality in favor of the better refresh rate either, landing Pantone Validation through factory calibration and using VESA DisplayHDR 400 certification, which results in over one billion authentic colors and deep contrasts.

As you can imagine, all this is a potent recipe for massive amounts of heat, but ROG has come up with an ingenious solution – the Active Aerodynamic System. When the laptop is opened, a hidden vent is revealed allowing much needed cold air to flow through cooling the entire machine, all despite a more slender profile.

The release of the Zephyrus S GX701 is planned for Q3 2019, so anytime soon, but ASUS has yet to announce pricing details, but common sense dictates it won’t come cheap. As soon as we know more, we’ll be sure to update you so you can get your hands on one of your own.

All The Lenovo Legion Products At CES 2020