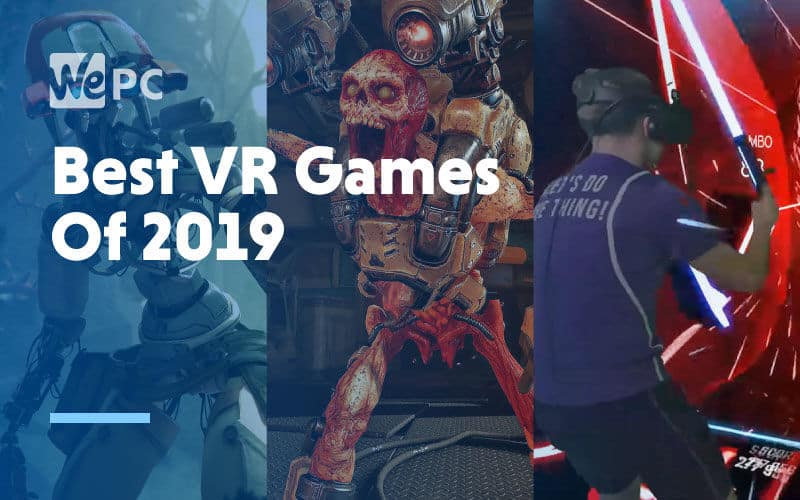 Virtual Reality (VR) has been around for a long time, with it gaining some popularity in the 1990s only to then disappear. The concept of VR has been around much longer than this though with ideas to trigger multiple senses at once spanning back as far as the 1960s.

VR has become less of a gimmick, with rapid advancements in technology bringing us impressive hardware like VR ready GPUs. What has been great about virtual reality recently is how accessible it is becoming with some headsets not even requiring a PC or console to power it. The new Oculus Quest allows gamers to play anywhere they choose as the hardware is in the headset its self. This may bring up some graphical limitations but over time this technology will only grow. The VR headsets that require a PC or console are constantly bringing out new and exciting titles with graphics and game mechanics improving each year.

In our search for the best VR games out there we have compiled a list of what really gets our senses flowing. Some of these titles have been out for a couple of years now with some getting some large recent updates. Our VR game breakdown will include games for the Oculus Quest/ Rift, HTC Vive, and PlayStation VR.

If virtual reality is new to you and you are considering getting into fully immersive gaming then you are going to need a fairly high-end PC. Our $2000 build is perfect for VR gaming due to its latest gen CPU and powerful graphics card. You may be considering VR for your console, in which case you are lucky as PlayStation have a really good setup for VR gaming and Xbox One consoles are compatible with the HTC Vive. It is worth noting you will need a PS4 to take advantage of PS VR but with the Oculus Quest as mentioned above, there is no PC or console required!

One of the most popular VR games for many of us, Beat Saber manages to carefully tread the line between novelty and replayability. Like DDR and Guitar Hero that came before it, this Rhythm Game manages to appeal to a wide variety of gamers. And, with ongoing music packs being released (like the recent Fall Out Boy DLC), the replayability factor is high.

Whether you want to play for fun or for a workout - Beat Saber is a great VR game choice.

Taking the classic FPS game and giving it an interesting twist, Superhot is one of our favorite VR games we’re seen for a while. With this game, whenever you stop moving, so does time. So, you have to control your movements to give you the edge on your opponents.

Each level has new challenges and more bright red figures to defeat, meaning you’re always having to think through your strategy.

With this film-like adventure game, you play as a smuggler operating near Mustafar. The firey world known as Mustafar is Darth Vaders home and this game gives you the chance to sneak about Vaders fortress while mastering the lightsaber. You find yourself uncovering a mystery and regularly interact with the sith lord himself. You'll navigate the fortress, gain skills, meet people along the way and all with the help of your little droid buddy, ZO-E3.

While the game wasn’t originally made for VR, the VR version helps to bring a whole new dimension to this well-loved classic RPG. The vast scope of the open world that you can explore, paired with the terrifying moments some of the monsters bring you - Skyrim VR was an easy choice for this list.

So, equip your weapons, and head out on the adventure of a lifetime, this time in VR.

I Expect You To Die

In the fantastic puzzle game that is I Expect You To Die, you play as a secret agent who must try and escape from a series of threatening situations. You have telekinetic abilities and your ultimate goal is to stop a weapons and pharmaceutical corporation named Zoraxis.

You are on a time limit and this game will test your problem-solving skills which for some may result in death!

In Blood & Truth, you play as Ryan Marks, an elite special forces soldier. In this action-packed shooter, you are chucked into a desperate mission to save your loved ones from a criminal overlord. You will be able to have intense shoot outs with a large variety of weapons combating countless enemy gangsters.

This game has all the explosions and drama you could ask for and was inspired by one of the more popular PlayStation VR games 'The London Heist'.

The Best VR Gaming Headsets in 2019