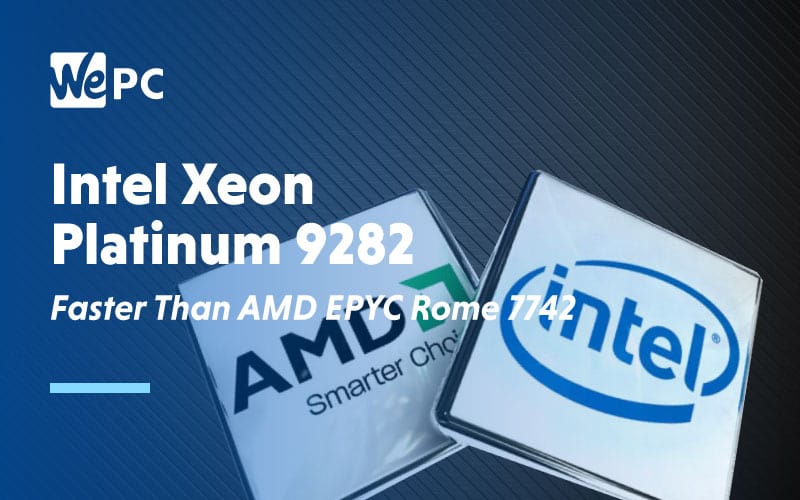 Intel has published a cluster of new benchmarks to highlight that its Xeon Class Cascade Lake-AP processors are more powerful than their AMD counterparts, the EPYC Rome CPUs.

Some bold claims there, that with a little more in-depth look hint at a pretty disingenuous approach on Intel’s part.

Is The Intel Xeon Platinum 9282 Faster?

Simply looking at the price and TDP, we are dealing with two very different beasts.

Secondly, the GROMACS version used for the benchmarks was, in fact, an outdated version that isn’t optimized for the Zen 2 architecture, notably by the absence of the 256-bit wide AVX2 SIMD instruction set. The latest version, 2019.4, explicitly supports AMD EPYC Rome CPUs.

Here, we see Intel use a version that benefits its products and penalizes AMD’s chip out of the starting blocks, so the comparison isn’t exactly comparable to real-world performance as the microchip giant claims.

Thirdly, the Xeon Platinum 9282 being 84% faster claim is a little dubious given that this represents peak speed, compared to an average improvement of 31% on the EPYC Rome, once again using an outdated utility.

Intel also explains that despite having a higher TDP, the Xeon chip is more efficient due to the need for fewer nodes to reach the same level of performance, claiming a lower total cost of ownership as well.

Finally, the benchmarks also hone in on memory bandwidth, pinpointing this as a crucial element of performance and lauding the merits of the Xeon chip in the process. Interestingly, the real-world application suggests AMD chips offer better bandwidth with companies such a Netflix opting to switch to AMD’s given the significant boost in bandwidth and similar total cost of ownership to the Intel’s CPUs.