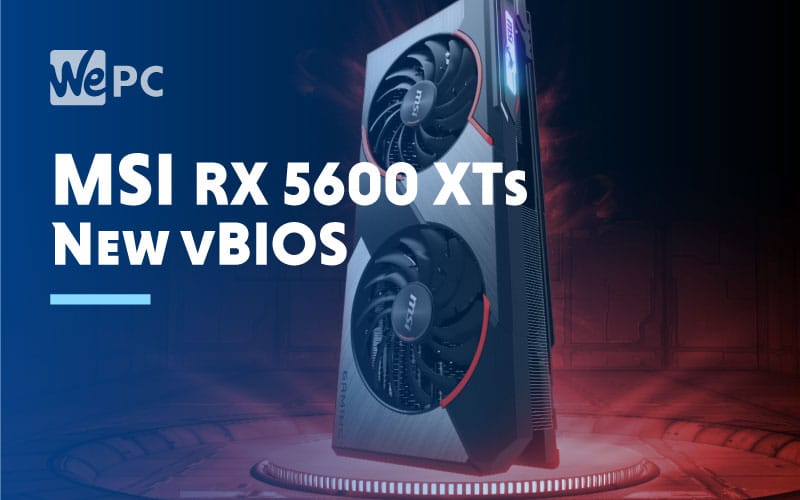 Announced during the most recent episode of the MSI Insider podcast, MSI revealed that not every AMD Radeon RX 5600 XT will use new vBIOS.

Eric Van Beurden, MSI’s marketing director, explained that the new vBIOS would increase a card’s clock speed. However, the memory increase will be a separate issue entirely. This means that some companies are boosting memory independently, but this won’t necessarily apply across the board as standard.

What Is The Issue With The New vBIOS?

Some of the cards will be able to boost the memory, but some aren’t certified to work at frequencies of 14 Gbps, meaning they will lose the stability they have when they’re operating at a stock speed of 12 Gbps.

The reason for this was further explained by Pieter Arts, product marketing manager at MSI. He said that AMD supplies partners with silicon and memory chips, but there’s no guarantee that all of them will have the same overclocking abilities to run at the higher 14 Gbps.

This could be the reason behind MSI’s and Asus’ hesitancy to apply vBIOS to existing cards because there’s no guarantee it will be worth it, just to boost the clock speed.

What Cards Will Support vBIOS?

However, for those looking to push the boat out and experience the new BIOS, MSI has released the RX 5600 XT Gaming Z, which does support vBIOS as standard. This model has a base clock rate of 1,615 MHz and boost clock rate of 1,750 MHz.

Similarly, Asus has its ROG STRIX TOP GPU, which has similar specs with a slightly lower base clock of 1,660 MHz but the same boost clock speed of 1,750 MHz, so there are options out there.

When it comes to standard 5600 XT graphics cards, things are still a little unclear. MSI has clarified that their RTX 5600 XT Gaming and RX 5600 XT Mech won’t receive the new vBIOS update. Other 5600 XT models like the Gaming Z variant will, though.

What impact these cards applying the new BIOS will have on memory remains to be seen.

Is Applying vBIOS Worth The Risk?

It’s possible that many cards will support 14 Gbps, but there’s a risk attached to applying the new vBIOS to them.

Doing so could lead to some RMA problems for users, so it all depends on whether you want to risk it to achieve 14 Gbps or whether you’re happy with the standard 12 Gbps.

MSI is promising that most cards will receive the new BIOS by February, but in most cases, the memory will remain at 12 Gbps, so the improvement will be to the processor frequency only.