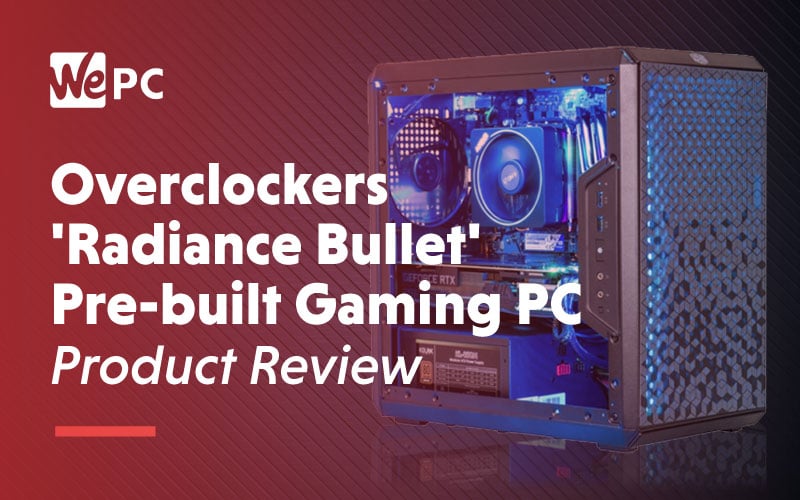 Today we have the fun task of reviewing one of Overclockers tasty prebuilt gaming PC’s targetting the mid-high range price bracket. Overclockers were kind enough to send us the Radiance Bullet so we could do a thorough test and find out what kind of performance levels this PC has to offer.

The Radiance Bullet has been specifically designed to target gamers and has been equipped with the ever-popular AMD 2700x, a card that is renowned for high performance at an excellent price point. Paired alongside the Ryzen processor is the excellent ROG STRIX 2070 GPU by ASUS that offers both superb aesthetics and brilliant performance. Overclockers have made great use of the 2700x’s full potential by arming the build with 3200Mhz RAM and a speedy M.2 500GB hard drive from WD to boot.

The case is a bit of a let down as it does tend to get quite warm when gaming, however, everything else in this build sings to the same tune and looks great, especially when in full RGB mode.

Before we go into any more detail about this PC and the performance though, let’s go over a full specifications list, so you know exactly what to expect from this build. 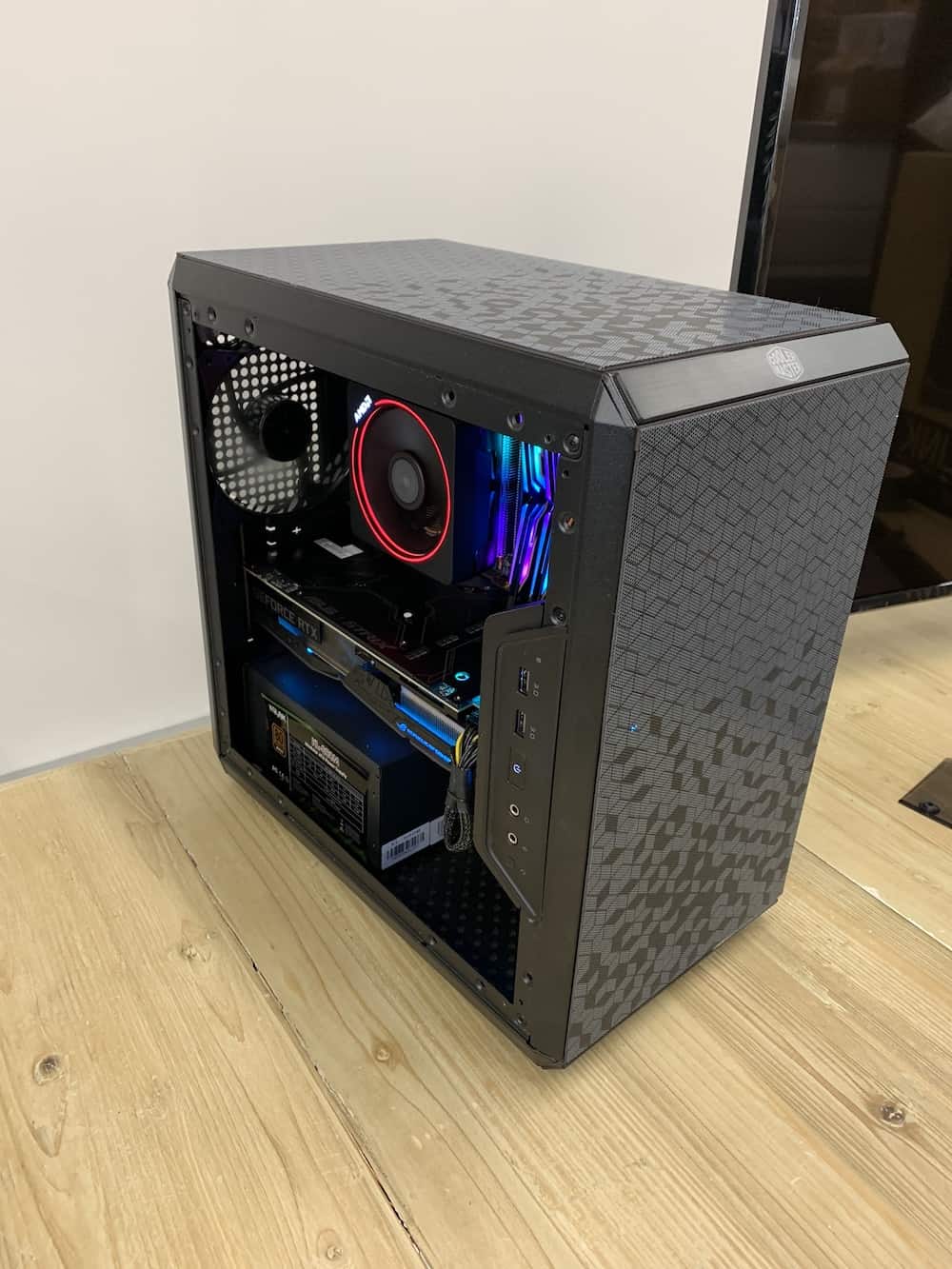 Let’s have a little look at what the Radiance Bullet has to offer in terms of specs. Below is a chart with all the major hardware components for this cool little build.

Before we get into any of the finer details of how this gaming PC performs, lets just quickly go over some of the more obvious pros and cons.

Now, obviously, this machine is purpose-built for the gaming enthusiasts out there, and the specs clearly show that. However, each build has a different overall performance level, and we want to see exactly where this one lies.

In the following section, we’re going to see how the Radiance Bullet performs in several different games, how it handles multi-tasking, how the build performs while editing media content, and what it feels like from a home media system point of view.

So, let’s get straight into it. 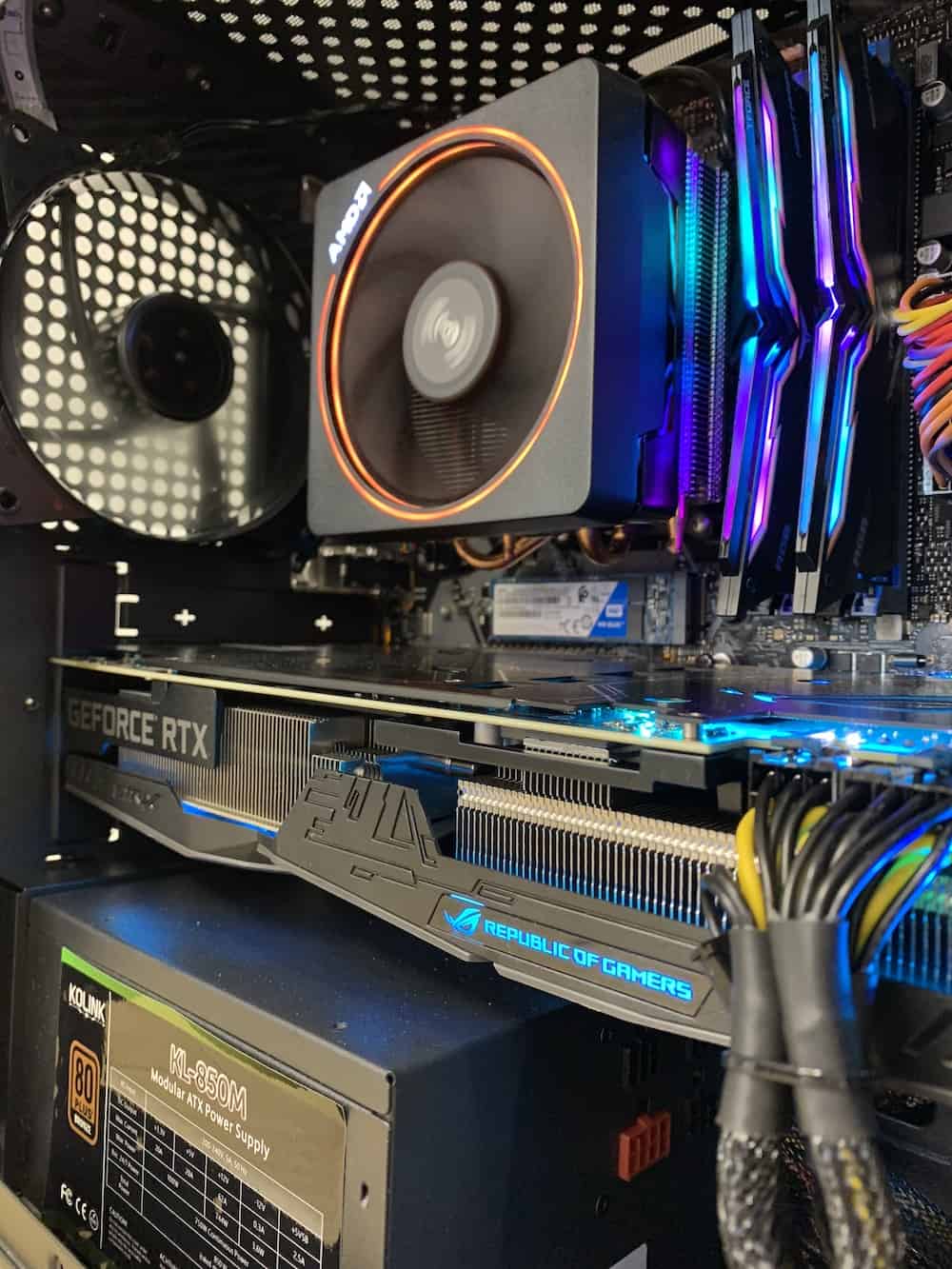 At the heart of this build sits an AMD Ryzen 2700x and Gigabyte’s RTX 2070 GPU, so right off the bat, you know this thing means business. The 2070 card is built around Nvidia’s new real-time ray tracing which, for those that aren’t in the RTX loop, is a new way of rendering light and shadows to produce a more realistic image. Something we can all agree is a welcome addition to any graphics processing unit.

The 2700x, which is widely considered to be the best pound for pound CPU on the market, is the engine that drives this build and is worth every penny. It provides superb multi-tasking performance, which is ideal for anyone looking to stream and game simultaneously.

As many will know, the CPU isn’t the most crucial aspect of a gaming build in the modern day. Thanks to technological advancements across the board and new ways of developing games and software, the GPU now takes the brunt of the computational demand when it comes to performance within a game’s scenario. What this means – from a gaming point of view – is the Radiance is well equipped to smash all your AAA game titles out of the park, and most in ultra! We clocked excellent FPS across a number of different games, even in the most epic of battle situations, the card kept the FPS well over 60. We will get into the figures more when we reach our benchmarking section, but for now, just know the Radiance Bullet performed exceptionally well from a gaming point of view.

Even though this build isn’t specifically targeting content editors, we’re going to touch on how it performs within highly stressful (multi-tasking & media content) situations regardless. After all, a high-end build with flashy RGB isn’t just for gamers; it’s for all consumers.

Now, what we mean when referring to multi-tasking is; having several different windows running at the same time, having a streaming type setup on the go, performing multiple editing tasks at the same time, and everything in between.

So, how did the Radiance Bullet weigh up? Well, I was pleasantly surprised at how well this build handled the power-sapping multi-tasking and media editing tasks. Because the 2700x is an eight-core processor with a multi-threaded design blueprint, it makes multi-tasking look like a walk in the park.

Now, we haven’t touched the clock speed of this thing, but it does have a very overclockable nature which means, even the slightest of tweaks will improve the performance levels exponentially. Furthermore, Overclockers have expertly implemented 3200Mhz RAM in this build which bolsters the 2700x performance hugely.

The GPU, again, speaks for itself and can handle pretty much anything your video editing software has to throw at it.

Overall I was really impressed with the multitasking performance results we saw and would highly recommend an AMD CPU & fast RAM if this is what you were looking for.

Even though this build has some of the latest hardware offerings currently on the market and would clearly handle any media file you threw at it, we’re going to see how it performs anyway, because why not?

Everyone loves watching TV and film, and even more so now that 4k is hugely popular across so many platforms. The Radiance Bullet and it’s super powerful 2070 can support 4k video playback and even VR to the highest level. We streamed a number of different shows on Netflix in 4k, and the playback was seamless, as you’d expect.

We’ve talked about how this build performs in a few different scenarios and to what level. We’re now going to touch upon the best features of the Radiance Bullet and what they offer you on a consumer level:

Even though real-time ray tracing isn’t hugely popular at present, there’s no arguing that it’s going to be a real hit down the road. Unfortunately for RTX cards, the real-time ray tracing buzz hasn’t quite taken off yet, mainly because many of the latest games don’t support its technology. 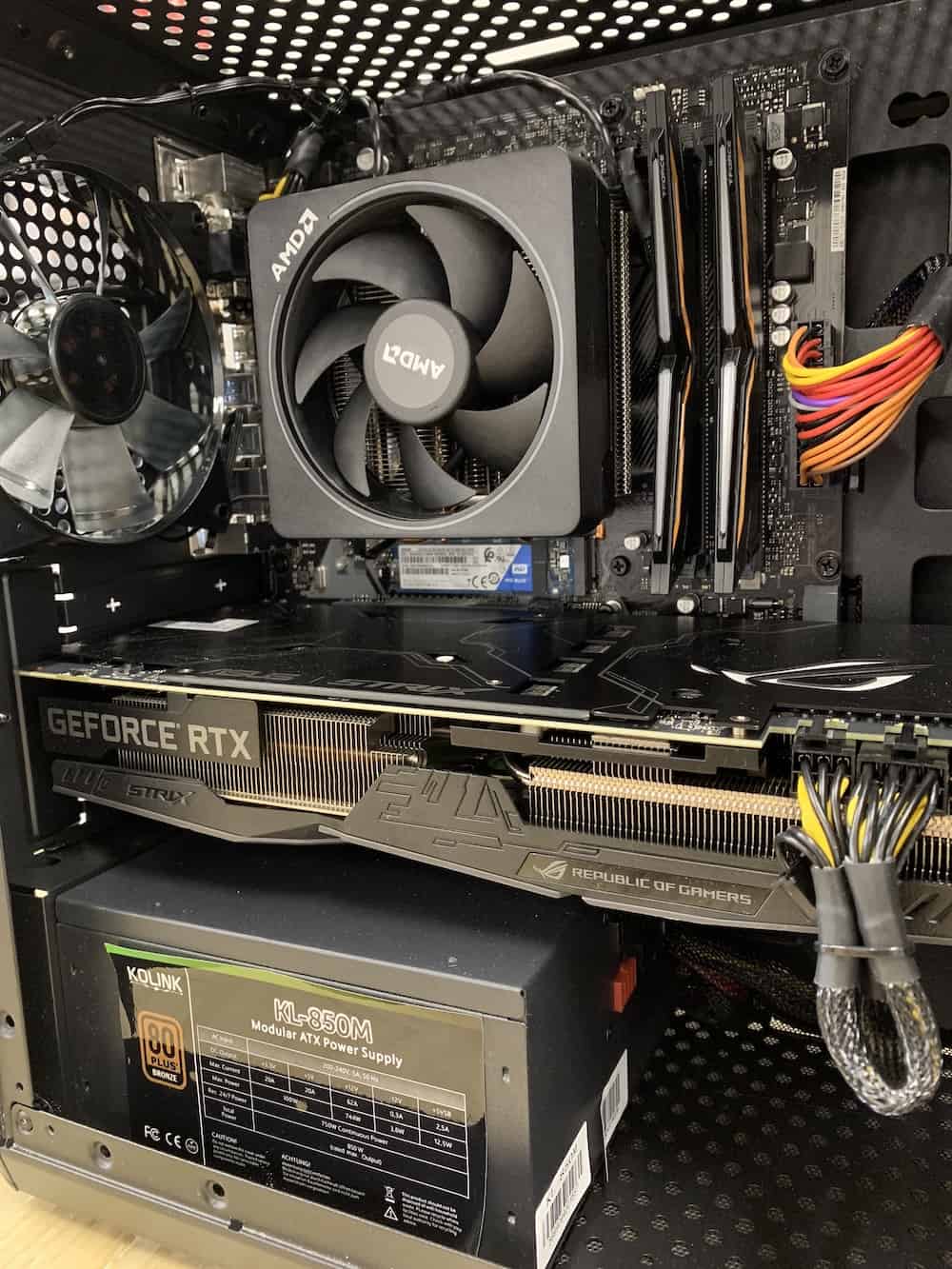 Something that has taken off, however, is the whole virtual reality gaming buzz. The Radiance Bullet, equipped with it’s powerful 2700x & RTX 2070, is going to make VR gaming look like a walk in the park.

Obviously, you’re going to have to purchase yourself some form of VR gaming headset to make VR gaming possible. This being said, it’s always good knowing that your PC is ready to go if you do plan to go VR.

One of my favorite features in this build (and any build for that matter) is its ability to overclock to even higher levels. Buying a PC in the modern day is a complicated process because you know sooner or later your hardware is going to become outdated.

With the Radiance Bullet being equipped with AMD’s ever-popular 2700x, you know taking this thing to the next level is achievable. One of the only downsides to this build, the cooling, may need some tweaking to be able to perform overclocking to a high level though.

Most of the time, when you see a build that has fancy new hardware and a big old graphics card, you expect it to be housed in one of these huge cases we see floating about today. Overclockers have decided to take a very different approach, though.

The Cooler Master Q300L Micro ATX case is one of the smallest cases we’ve seen for a build of such quality. On the one hand, you have epic power in a super small case that fits anywhere in your gaming space. However, on the other hand, you also have a lot of heat contained in a small space with not much ventilation. We’ll touch upon the cooling issues shortly, but as far as size goes, it’s still impressive to see this much power in such a small case.

Areas To Be Improved

In all fairness, there isn’t a huge amount of improvement needed for the Radiance Bullet. This being said, the cooling problems are something that needs to be addressed if you’re going to be using this PC daily.

It was on the first day of using this build that I knew the Radiance Bullet was going to have some internal temperature problems. As soon as it was unboxed you could tell something wasn’t quite up-to-scratch.

The main problem which affects this builds temperature is the fans or lack of fans in this case (no pun intended). It only has one 120mm fan positioned at the back of the build. When you consider the hardware components in this thing, you soon realize that one fan is not enough. There are two clear hot spots on the build which, ultimately, affect the PC’s overall performance.

It is worth noting, however, that we did some GPU temperature checks and to our surprise, the GPU never got over 61 degrees which, for a small case, is really quite impressive.

My advice for anyone looking to buy this build is, get additional fans installed on the roof and front of the case as soon as you can. It will make a world of difference. 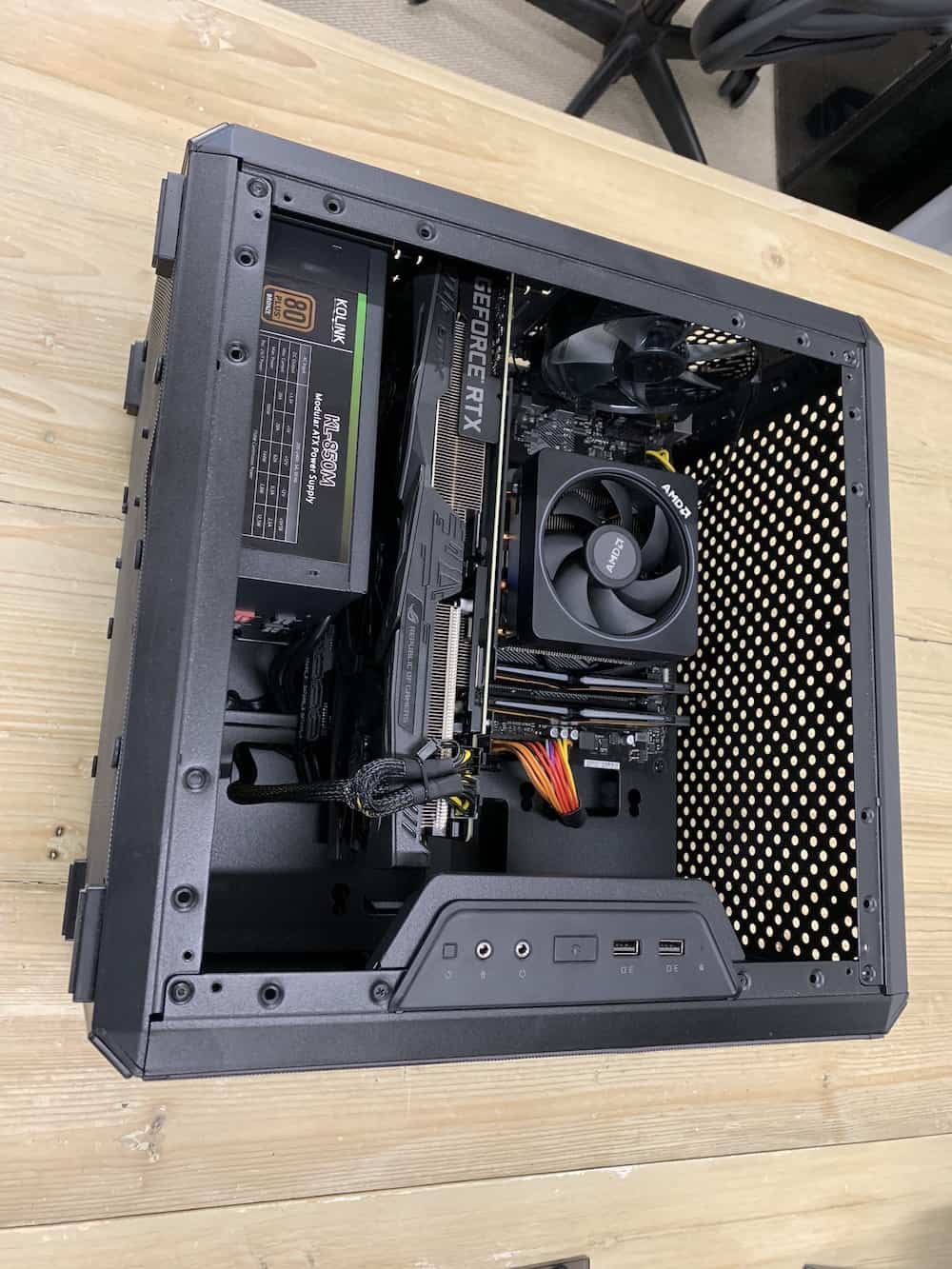 So, we come to our verdict, what did we think of Overclockers Radiance Bullet Gaming PC?

Well, to get a more generalized result, we allowed all the WePC team to have some time with this build, and the overall thought was a positive one.

Everyone enjoyed the gaming performance of the Radiance Bullet and had no issues playing several different AAA game titles. All on ultra might I add. We did sample some VR action as well, which worked great.

Pro tip: Make sure you have some supervision when using those things, accident central otherwise!

Almost all the team noticed the heat that the build produced, which is a shame but an easy fix at the same time. A lot commented on the aesthetics and how they really enjoyed the textured design that the magnetic grills had, not to mention the fantastic RGB interior.

Basically, it was a hit in the office. The only improvement we could come up with was the cooling. Fitting a couple of extra fans would make a huge difference, other than that, this is a great little gaming machine that’s going to serve you well years into the future.