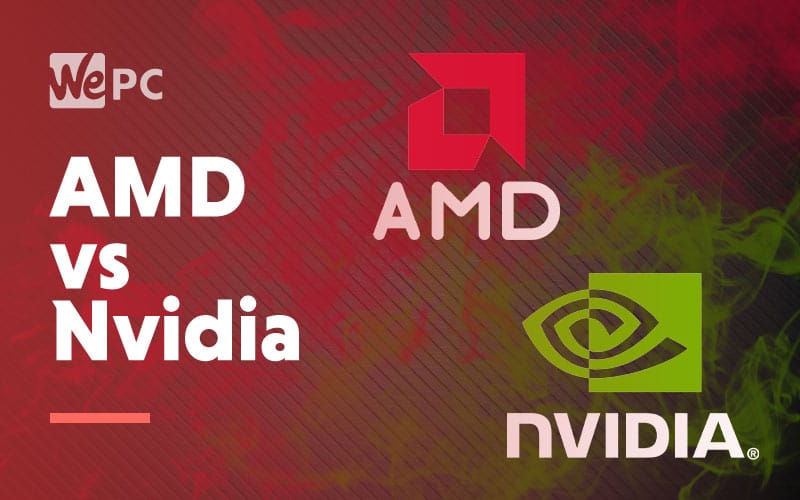 AMD and Nvidia are the biggest names in gaming, PC gaming that is, but that's not to say they don't have a hand in consoles too. In this article, we're going to go through all you need to know about these tech giants and who comes out on top.  AMD vs. Nvidia, which side are you on? Without further ado, let's find out who manufactures the best graphics cards.

AMD, or Advanced Micro Devices, is the second-biggest name in the world of personal computing. Serving as Intel’s singular rival in the CPU market, both are continually pushing the limits of x86 and x64 processors across the industry, with the recent launch of Ryzen bringing AMD back into the competition. This is a battle that’s been going on for decades, and it is looking as heated as ever.

So, where do graphics come into it? Well, that is where Radeon enters the picture.

What Is AMD’s Radeon?

Radeon started as an ATI brand, not an AMD brand. ATI, or Array Technology Inc., served as Nvidia’s chief rival in the PC graphics space from the ’90s to the mid-’00s, so initially, it was Nvidia vs. ATI. In 2006, AMD acquired ATI and the Radeon brand. The newly-branded AMD Radeon became Nvidia GeForce’s competitor, making AMD the smaller rival in both the CPU and GPU markets.

Radeon GPUs are consumer-oriented gaming graphics cards. In recent years, they are branded with R3, R5, R9, and RX variations.

Nvidia emerged in the 90s as one of many competitors in PC graphics, alongside 3DFX and ATI. While the GPU wars of the 90s were an interesting time, it led to many acquisitions and bankruptcies until only two competitors remained: Nvidia and ATI.

We obviously know what happened to ATI, but since then, Nvidia has steadily climbed the market. Transitioning into the PS3/360 eras, they acquired market dominance over ATI just before AMD acquired them.

In addition to PC graphics, however, Nvidia is also making itself known in other markets, most notably, self-driving cars and AI. While both companies are interested in the mobile and console markets, Nvidia has grown more adventurous with its non-graphics outings, likely due to their position in the market.

What Is Nvidia’s GeForce?

GeForce is simply the brand that Nvidia uses for their graphics cards. Unlike with AMD, there isn’t really a story behind the brand name here.

GeForce GPUs are branded with GT, GTX, and RTX.

The Competition So Far...

Since the merging of ATI and AMD, Nvidia and AMD have been the last remaining discrete GPU manufacturers for the PC gaming market. Much like AMD's standing with Intel in the CPU market, they occupy a much smaller portion of the market overall and are generally seen as the underdogs.

Make no mistake: AMD definitely has a lot less money than Nvidia does. Nvidia's cash pool allows for the more frequent creation of new GPU architectures and diversification in areas like self-driving cars and AI. With the debut of the SHIELD hardware, Nvidia has even made a big move into mobile technologies that AMD has yet to mirror.

Gaming-wise, both companies have played prominent parts in the console wars. The Xbox 360 and Nintendo Wii both packed ATI (AMD) GPUs, while the PlayStation 3 was made using a modified Nvidia GPU. In the current generation of consoles, AMD has manufactured custom APU/SoCs for both PS4 and Xbox One, while Nvidia has adapted their SHIELD tech for usage with the Nintendo Switch.

Economically and overall, Nvidia is probably winning. However, AMD is unlikely to go anywhere anytime soon, and if you look at their actual GPU offerings, the two are a lot more competitive than you might think. With frequent price and performance wars across multiple generations, you can pretty much assume that while Nvidia will always rule the highest tier of performance, AMD will put up one hell of a fight in the budget and midrange.

AMD Vs. Nvidia: The Syncs And Software

Before we compare the hardware, let’s take a moment to talk about Sync technologies and software offerings.

Fundamentally, the two technologies are trying to do the same thing: remove screen-tearing from the equation, ensure consistent frame pacing, and provide an overall smoother gaming experience. They do this through a technology called “Adaptive-Sync,” which dynamically adjusts the refresh rate of a monitor to match the current framerate of what you’re playing. This makes lower average framerates smoother to play with, and helps alleviate the screen tearing that often comes with higher framerates, without the input latency that comes with V-Sync.

In general, both will do great, but Nvidia’s implementation is more expensive since it requires dedicated hardware inside of the monitor to function. FreeSync, by comparison, only needs an up-to-date DisplayPort port and supported AMD GPU to function properly.

In terms of overall software offerings, Nvidia used to have a fairly significant advantage here. Nowadays, if there’s an Nvidia feature like Share/Shadowplay, then AMD has it matched. There are still games that come out with specific optimizations and graphical effects for one of the two manufacturers. Still, these have become much rarer over time due to negative reception and perceived anti-competitive behavior.

AMD Vs. Nvidia: The Matchup

We’re going to put these two GPU manufacturers up against each other in five key price ranges. In addition to performance, we’ll also be considering value, so raw graphical horsepower won’t ensure wins in each category if it comes at a severe cost to value.

AMD vs Nvidia - The Enthusiast

In the Enthusiast tier, we took the three top-performing GPUs on the market and pitted them against each other.

AMD is still yet to compete in the realm of the enthusiast, but their entry does feature an impressive 16GB of VRAM. In terms of raw performance, the RTX 2080 Ti beats the other cards on this list pretty handily and isn't far off the RTX Titan GPU either. Against the 1080 Ti, results showed an increase in performance by more than 30%. Against the Radeon VII, the performance increase was around 50%.

The price discrepancy between the RTX 2080 Ti and the RTX Titan is in the thousands of dollars for a mere 10% performance difference. That isn't worth it by any stretch of the imagination, especially if you're just a gamer.

AMD Vs. Nvidia - The High-End

Beneath the absurd performance levels of the Titans and the 2080 Ti's, the battle quietens down with the RTX 2080 having no equal. Benchmarks indicate significant results in favor of the brilliant RTX 2080, with AMD's brilliant RX 5700 XT still being quite some distance behind.

For raw performance, future tech such as ray tracing, and excellent FPS counts, the RTX 2080 is the way to go and wins this category with ease.

AMD Vs. Nvidia - The Mid-Range

Originally, the two competitors in this category were the GTX 1070 and RX Vega 56. By a thin margin, RX Vega 56 managed to pull out ahead of the GTX 1070 in the Radeon vs. Nvidia battle. That being said, that didn’t sit well with Nvidia. Just a few months later, the 1070 Ti released and took back the lead in this category, as it found its self performing nearer to the GTX 1080.

With time, the release of the RX 5700 XT came around, and of course, Nvidia launched its latest RTX graphics cards. This yet again changed the mid-range battle, with Nvidia finally not getting everything their own way. On the surface, the RTX 2070 is a better graphics card; it comes with future-proofing technology and offers better performance (only just). That being said, the RTX 2070 is a more expensive component making this a very interesting contest between the two cards. The RX 5700 XT offers consumers some fantastic value with an almost unbeatable price to performance, and it is for that reason, AMD has racked up a point here.

AMD Vs. Nvidia - The Budget Range

The GTX 1060 dominated this category for a long time, but then the GTX 1660 came along in 2019. Little challenged Nvidia's budget entry as this GPU offered excellent results for a very affordable price. However, that was about to change in late 2019 with the introduction of Radeons budget GPU, the RX 5500 XT.

With both GPU's offering very similar results at an almost identical price, the budget category became a very tricky one to decipher. While benchmark results slot the GTX 1660 at around 10% better off, the in-game results begged to differ.

AMD Vs. Nvidia - The Entry-Level

AMD's RX 580 is now around four years old and comes with dated architecture when compared to the newly released GTX 1650 Super. The 1650 Super is incredibly efficient in comparison to the 580, and this newer GPU produces better FPS results across a lot of titles. Despite this, the price of the cards is very similar, and this can cause a bit of a headache when it comes down to choosing the best entry-level card. Of course, the RX 580 was once one of AMD's mid-range GPUs, but as technology advances, we now see it in a very affordable place.

The benchmark results were dependant on games, but the RX 580 came out on top for a few titles that benefited from the high amount of VRAM. It is because of the extra memory you get with the RX 580 that this GPU has come out on top today, as it, generally speaking, will give you greater longevity with your system.

The winners ultimately depend on your individual needs as a gamer. In a few of the categories, raw performance has lost out to excellent value, so take each result with a pinch of salt.

Despite this, it is clear that Nvidia is the standout winner in the graphics card market, with superior high-end graphics cards for enthusiasts and gamers. The RTX Titan and RTX 2080 Ti are untouchable at the moment, with even the older 1080 Ti still holding its value nicely.

Nvidia came out as the winner across the most categories we outlined above despite AMD's forward strides in the GPU market. While the RX series produces some fantastic performance, they can only compete with Nvidia's mid-range graphics cards.

When we look at who is winning from a value standpoint, AMD is smashing the competition with multiple options to cater to various low-end budgets. Bang for your buck is important to many, and with the decreasing prices of the RX 580 and 570, it's now even easier to build a capable machine for less.

AMD and Nvidia will always be competing. AMD may be depicted as an industry underdog in both CPU and GPU manufacturing. Still, the fact is they're quite profitable, and their presence helps prevent Intel and Nvidia from stagnating prices and performance. We don't recommend buying on company loyalty, but as long as AMD is providing competitive options in your price range, you should consider buying from them.

We hope this article helped show you where AMD and Nvidia currently stand in the GPU battle. What GPU are you currently using? What do you plan on upgrading to? Comment below and let us know!