How to Turn Off Mouse Acceleration in Windows 7 and 10 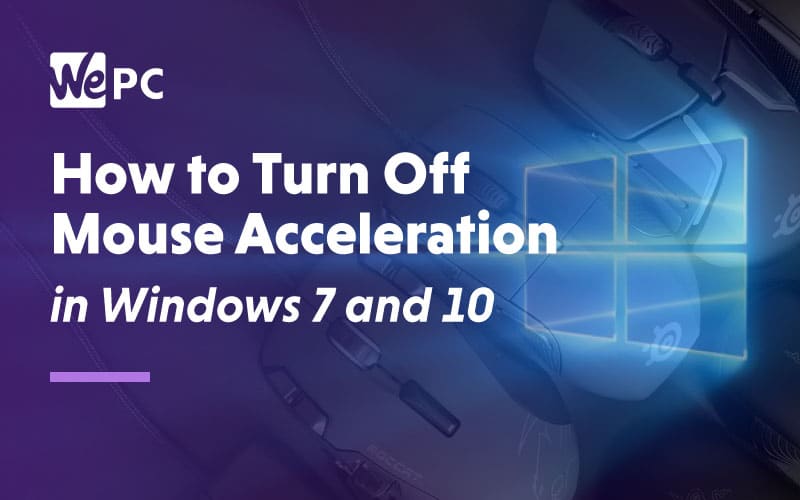 If you’re reading this, it’s likely that you’ve heard or seen pro FPS players talking about the importance of turning mouse acceleration off. And obviously you want to be a pro-- or at least better-- too, so that’s why you’re here.

But before we get into the nitty gritty of how you turn it off, let’s talk about what mouse acceleration is, what it’s used for you, and exactly why turning it off helps in getting those much coveted headshots.

So, without further ado, let’s get started...

What is Mouse Acceleration?

In layperson’s terms, the faster you move your physical mouse, the further your onscreen pointer moves on the screen.

What is Mouse Acceleration Useful For?

Think of it this way, your screen size is probably about 18 inches diagonally. With mouse acceleration off, to get from your bottom right corner to your top left corner, you’d need to physically move the mouse a combined 18 inches through a series of short swipes. But with acceleration on, one fast, short swipe could get the job done.

However, when you’re gaming this is a different story altogether…

Why do you Need to Turn this Off when Gaming?

Okay, but seriously. Since mouse acceleration is almost solely based on how fast you move your mouse from one point to the next, it’s not very accurate. By turning this off, your pointer reflects your mouse movements 1:1. This gives you particularly accurate aim in FPS titles due to the way their camera works.

Turning mouse acceleration off can also make it easier to develop muscle memory, which allows you to instinctively repeat movements without having to think about them.

Psychologically speaking, mouse acceleration fundamentally changes the way your brain processes your movements. Without it off, your actions are accurate: movement in physical space is correlated to movement in digital space. With it on, your actions aren’t about a specific location, but rather the speed and direction you moved your mouse.

This means physical speed and direction are abstracted into digital movement, which can be a jarring transition. Throw in the speed threshold for activating mouse acceleration and you have a lot more info being pushed through your brain during important, split-second decisions.

In short, it’s easier for your brain to get used to having mouse acceleration off.

Let’s put this all together in a hypothetical situation:

Imagine you’re playing [insert your favorite shooter here]. You’re camping inside a house because of YOLO. Now you hear footsteps behind you and you’re 90% sure you could shoot them first.

Let’s see how this plays out both with and without mouse acceleration.

With Mouse Acceleration: You to turn around as fast as you can, but you subtly moved your mouse too fast in the heat of the moment and overshot your target by a few inches. You got in a couple good shots, but she hit first and it was a battle of attrition at that point.

Without Mouse Acceleration: You whip around the corner, land your mouse dead center on her forehead, and then headshot. You’re dead. Turns out you weren’t as fast as you thought. But you were accurate!

How to Turn Off Mouse Acceleration

Now that we’ve sold you on the importance of turning mouse acceleration off while gaming, let’s actually go over what you need to do to turn this off!

There is more than one way to get this done, but I’m going to show you the easiest way.
If you’d prefer to view these instructions as a video, then check them out here.

Almost all pro-FPS players have their mouse acceleration off. Considering how accurate their aim is, it’s worth trying it out yourself. After all, if Steph Curry was giving you tips on 3-pointers, you might want to listen.

Turning mouse acceleration off not only improves your aiming skills, but it also improves your muscle memory. If nothing else, this should let you make fast, accurate reactions at the drop of the hat, something you’re called to do a lot in any competitive video game.

Juzel Albert Padilla has always been passionate about computers. Knowing how hard it is to find a solution for every computer problem, he aims to deliver the best solutions possible through his work on WePC.com. His passion to help and reach out to computer enthusiasts is what pushed him to deliver clear and concise contents. His writings focus on delivering informative tutorials and detailed how-to’s.