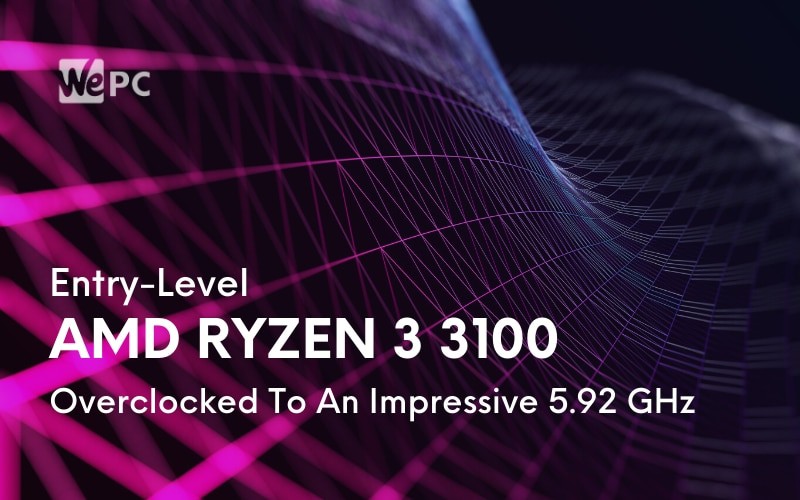 In what was supposed to be a budget entry-level offering from AMD, it seems the Ryzen 3 3100 is capable of reaching much higher frequencies than we initially thought.

Taiwanese overclocker TSAIK has managed a pretty impressive feat when it comes to overclocking the Ryzen 3 3100. TSAIK managed to push this entry-level CPU to 5.92 GHz across all four of the cores.

How Was This Achieved?

In order to reach this high frequency, TSAIK used a Vcore of 1.45 volts of power as well as liquid nitrogen cooling. A base clock of 100 MHz was used and a multiplier of 59.25 was used to achieve the clock speed that was nearing almost 6 GHz.

There was just one 8 GB memory module used during this overclock that was running underclocked at 1600 MHz. As well as this, an MSI MAG X570 TOMAHAWK WIFI motherboard was used to achieve these speeds.

Another record that TSAIK holds is the highest overclock speed for the Ryzen 9 3950X, also achieved on the MSI MAG X570 TOMAHAWK WIFI motherboard which was recorded at 6.041 GHz.

This is great news for those who are looking at picking up an entry-level CPU. Although you’re not likely to reach the same impressive speeds as demonstrated above, the potential is surely there.

Has this interested you enough to pick up one of these processors? Are you looking forward to manually overclocking your CPU? Let us know down in the comments section below, we love hearing your thoughts.