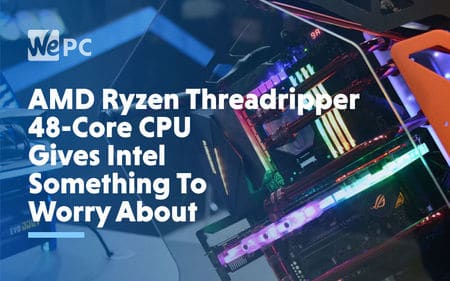 According to rumors in the industry, it looks like AMD is gearing up to release a 48-core processor for its 3rd-generation Ryzen Threadripper range of CPUs.

This was revealed through a post on a Chinese tech site, which was quickly spotted by Tech Powerup. In this post, the processor is referenced in the code for CPU-Z version 1.91. CPU-Z is a monitoring and profiling app that provides details on what hardware your PC is currently running.

Of course, as this is still a rumor, it’s worth taking with a pinch of salt. However, previously reputable sources have revealed that there will indeed be a 48 core model coming from AMD. This source has previously been correct about the 3990X model so there might be something to the rumors after all.

Where Will This Model Sit In AMD’s CPU Lineup?

If the rumors are true, it will mean that the 48-core chip will sit in the market between AMD’s 64 core Ryzen Threadripper 3990X and the previously launched 32 core 3970X model.

This will further expand the range of CPUs on offer which is good news for those customers looking for more options between the two models mentioned above.

As the 3990X looks like it will be very pricey when it releases, this could be good news for those looking for a more reasonably priced CPU from AMD without too much of a dip in performance.

This looks like an interesting start of the year for AMD and if the leak is true, it will certainly make Intel sit up and take notice. As AMD expands its lineup of high-level CPUs to fit a variety of budgets, it could mean great things for consumers but worrying times for competitors like Intel.

We hope we will find out more about whether these rumors are true during CES 2020. As always, we will keep you updated on the latest news from AMD when it comes in.