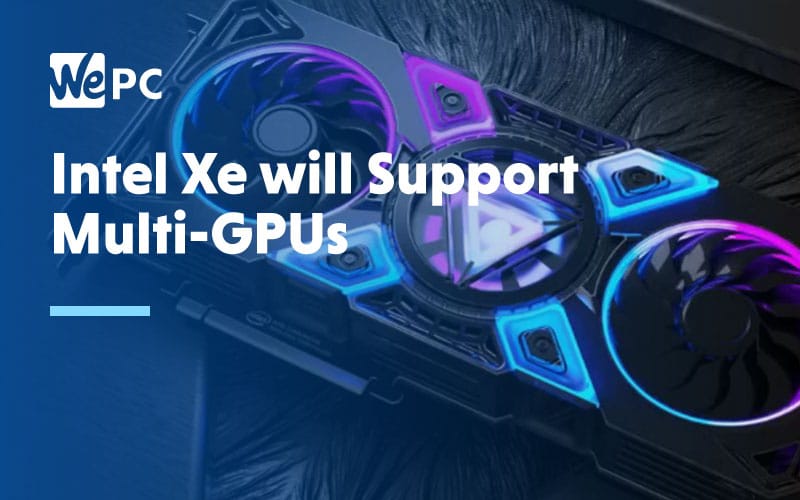 Intel is getting pretty serious about the thought of implementing multi-GPU technology with its upcoming GPUs. Hints from the latest Linux kernel show that Intel is making clear plans to create its own multi-GPU solution.

The changes made by Intel in the Linux 5.5 kernel, spotted by Phoronix, appear to include a segment of code which allows for the handling of a combination of a standalone GPU and the integrated GPU that the Intel processor will contain.

What Does This All Mean?

To put it simply, if you have both an Intel graphics card and an Intel CPU, the graphics card could work alongside the integrated GPU from the processor if needed. While this might not seem too useful at first, it really goes to show that Intel’s commitment to the graphics card market isn’t simply a flash in the pan, it looks like they are working hard to corner the market.

As Intel’s Xe cards are going to be built from essentially the same foundation as the integrated graphics card, Intel hopefully won’t have too much of a problem pulling this off. While the details of how this will work aren’t yet available, seeing as how creating multi-GPU tech is something that AMD hasn’t quite mastered yet, it will be interesting to see how Intel goes about this.

While we don’t quite know how Intel is planning on using this technology, it seems clear that the end goal would be for multi-GPU gaming support. Even if this isn’t the short term aim, the extra power that could be tapped into would prove handy for heavy workloads.

It will also be interesting to see if this will stick as a Linux feature only, or if we will see it on other platforms such as support for DirectX games. While it might take some time before Intel are challenging AMD or Nvidia’s share of the market, if Intel’s multi-GPUs are affordable then they could be the go-to move for budget systems.

While multi-GPU is something AMD and Nvidia have struggled with in the past, it makes sense for Intel to jump in here as it doesn’t appear to be a primary goal of its competitors at the moment. This will also help them to ease into the market without having to come up with a direct challenge to the latest GPUs.

With the Intel Xe GPUs set to launch next year, hopefully, the software engineers will have enough time to pull this off successfully. If not, we may not see this feature hit the first wave of cards. The impact that this might have on computer building will be interesting to see, this could make it a lot more cost-effective for those just starting out.

It’s unknown whether or not AMD will try and implement their own method at this time, but if Intel’s method takes off, we’d count on it.