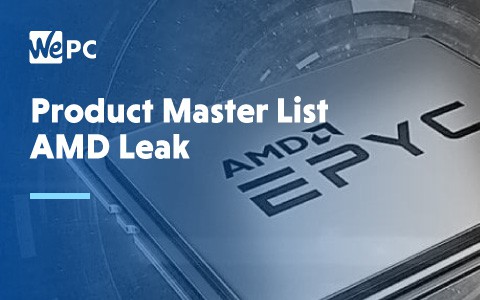 Going by a leak of AMD’s Product Master list that surfaced this week, it appears the microchip giant is planning to launch more EPYC-based server CPUs with upped TDP ratings. This is off the back of an announcement in September this year that brought to light AMD’s next flagship high-performance computing market CPU, the 64-core EPYC 7H12 with a colossal TDP of 280 W.

At this stage, next to nothing is known about the CPUs, notably when we can expect them to go on sale, whether AMD is targeting a particular portion of the market, or whether they will be OEM-only variants of the EPYC 7H12. Furthermore, we don’t know in what respect the EPYC 7R22 and EPYC 7R32 will differ from the already announced EPYC 7H12. The other models might include a small change or a cluster of new features we don’t know about yet.

The Master Product list also breaks down several EPYC chips with TDP ratings ranging from 180 W to 225 W, although in a similar fashion to the 280 W models, we don’t know all that much about them.

From what we know of the EPYC 7H12 (64 cores, 128 threads, a base clock speed of 2.6 GHz, turbo boost at 3.3 GHz, a massive 256 MB of L3 cache, 280 W TDP, and compatibility with other Rome CPUs), it is aimed at data centers packing quite a substantial arsenal of servers where power consumption considerations are sidelined in favor of performance.

It’s worth keeping in mind that the Product Master isn’t exactly a reliable indicator of AMD’s future plans and is more an inkling of what the company may possibly decide to release in the future with no guarantees attached. In theory, it’s for internal eyes only.

Additionally, these types of lists often feature products that are never destined for the global enterprise or consumer markets, with models made bespoke for manufacturers and OEM purposes.