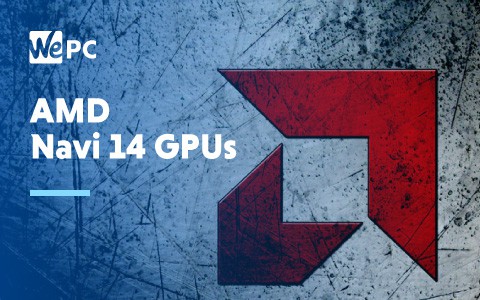 So far we know that AMD has only confirmed two GPUs in the RX 5500 series, the RX 5500M and RX 5500. We know that these cards are similar in a number of ways, but the main differentiating factor is the fact that the mobile version will include less memory and slightly lower clock speed.

A further 12 devices have recently been found in the Navi 14 range but these have yet to be given graphics cards. It looks likely that the RX 5500 XT card will be among these listed device IDs. We are still waiting for further news on the upcoming Navi 14 RX 5500 XT card which looks to have 1,536 RDNA cores.

What do the device IDs mean?

The list of IDs was leaked by Twitter user Komachi_Ensaka earlier this week. We can see from the linked tweet that 14 device IDs have been listed, including entries for the Radeon RX 5500m and RX 5500.

Now just because there are 14 individual entries, that isn’t to say that we will be seeing a further 12 releases. It could be the case that some of these device IDs never get used and simply lay dormant.

Another possibility is that a fair few of these IDs will be used in the upcoming iMacs and MacBooks or will even be reserved as test units not accessible to the public. The best-case scenario is that we will see individual releases for the rest of the entries, but I wouldn’t hold out too much hope.

With the 7340:C1 entry and 7340:C7 entry being held by the RX5500M and RX 5500 respectively, both of these GPUs have appeared in the CompuBench database before they were announced.

Interestingly though, there are two additional entries, the 7341:00 and 7340:CF strings that also appear in the CompuBench database listing. It is unclear whether these listings are accurate though as they appear to be very similar to the original RX 5500M and RX 5500 listings.

The main thing that differs in these listings is the memory configuration. Strangely enough, the 7340:00 listing comes with 8GB GDDR6 while the 7340:CF comes with just 3GB… unless we’ve taken a step back in time, we’re assuming this is either an error or maybe a lower-end GPU for the budget market.

While these listings are interesting to look at, it is merely guesswork when trying to figure out if they will correspond to actual releases. We may likely see a couple of new releases from this list, but we’d suspect we’ll see a couple more “M” variants as well.

As usual, we will keep you updated with any news that arises surrounding these cards. Hopefully, we’ll get more concrete information on a couple of these listings, maybe even a release date for the RX 5500 XT card?