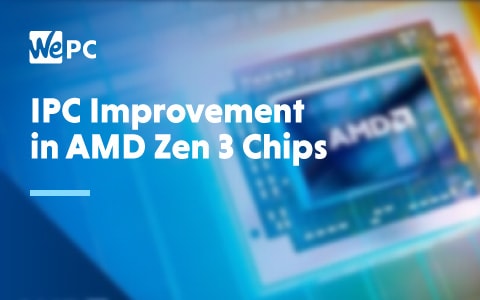 Although AMD has been rather forthcoming with snippets of news about its upcoming Zen 3 Milan microarchitecture CPUs, thanks in part to a well-documented road map, specifics about what we can expect from the chips has been light. A new rumor, however, suggests that AMD plans to up the IPC count leading to a significant boost in power.

A source has told RedGamingTech that the IPC jump would exceed 8% over the existing Zen 2 tech, at the very least, and reports an engineering sample of the Zen 3 tech attaining clock speeds around 100 to 200 MHz higher than the existing Zen 2 CPUs.

AMD Zen 3 microarchitecture is based on 7nm+ process node tech and will stick to the 8-core chiplet setup implemented in the Zen 2 chips. It is widely expected to be the last Zen design to use the AM4 socket format.

We already know that AMD Zen 3 CPUs will feature a different cache arrangement. Rather than the Zen 2’s 16 MB of L3 cache allocated to each core complex through a split core complex die, the new chips use a 32 MB L3 cache for each core complex die, meaning every single core has access to a more substantial chunk of cache, which should reduce latency quite significantly. Coupled with the higher IPC count and the upped clock speeds, we are looking at quite the jump in terms of raw performance.

Despite only launching the Zen 2 chips as recently as July, AMD is seemingly powering ahead with the Zen 3 Milan CPUs. They are already out of the design phase with a slated launch sometime in 2020. If they prove as successful as their predecessors, then AMD is likely to further bolster its market share from an already impressive 30% and continue to nibble away at Intel’s decade-long dominance.