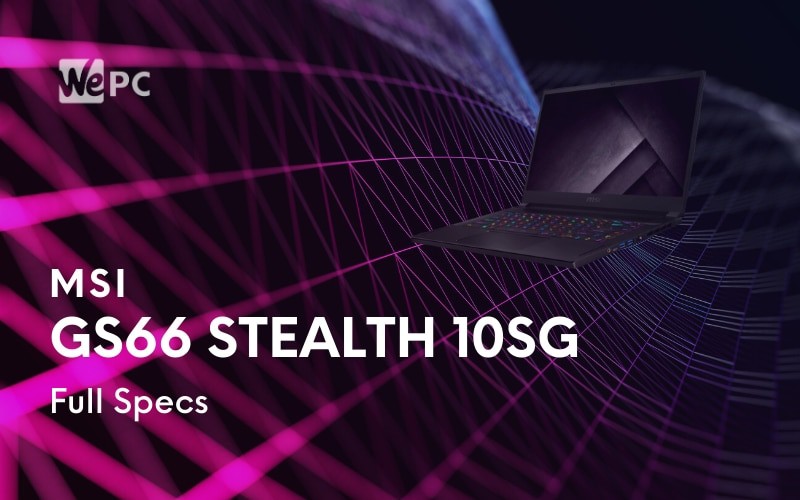 According to the listing, the MSI GS66 Stealth 10SG boasts a 14nm process Intel Core i9-10980HK CPU with eight cores, sixteen threads, a base clock speed of 2.5 GHz, and a boost clock speed of 5.3 GHz. With AMD set to wow everyone and their uncle with the 7nm process Ryzen 4000 CPUs, the ball is now in Intel’s court to answer back with its 10th gen Comet Lake-H line, spearheaded by the very CPU found in MSI’s new laptop.

The GS66 Stealth 10SG model in the listing has 32 GB of 2666 MHz DDR4 RAM (expandable to 64 GB thanks to a pair of SODIMM DDR4 slots) paired with a spacious 2 TB PCIe M.2 SSD and space for an extra SSD if required.

Keeping the laptop cool is MSI’s CoolerBoost Trinity+, which carts heat away from the GPU and CPU thanks to a trio of fans and no less than seven heat pipes.

MSI is also throwing in welcome features such as a pair of Dynaudio Duo Wave 2W speakers, WiFi 6, one HDMI 2.0 port, one USB 3.2 Type-C, two USB 3.2 Type-A, and one Thunderbolt 3 port. Another nice touch is that MSI has tasked SteelSeries with designing the keyboard, which features key-specific RGB lighting.

As for the all-important question of price, the listing has the MSI GS66 Stealth 10SGS gaming laptop priced at around $4,250. We imagine this sits very much on the higher end of the scale and we expect lower prices in other markets.