The Difference Between NVIDIA SLI and AMD Crossfire 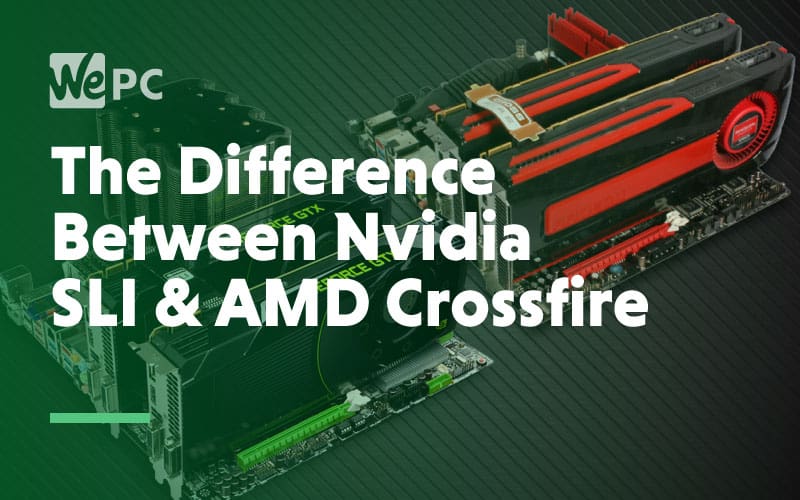 Anyone who has wanted to get more power out of their computer has undoubtedly asked,“Can I just slap an extra video card onto my motherboard and get twice the power instead of just buying a more expensive, larger upgrade?”

The short answer is yes...sort of. With some caveats.

The long answer though is no, you can’t just instantly get twice the power with twice the video cards. Using multiple video cards to increase performance is possible, but there are also some restrictions.

There are two ways to go about adding multiple graphics cards to your computer: AMD CrossFire or Nvidia SLI.

The laws of diminishing returns already rears its ugly head with two graphics cards, so once you get past dual cards it really comes into play. Anyway, Nvidia has decided to stop supporting three-way and four-way SLI on the GTX 1080 and 1070 GPU models, so it’s likely they’re trying to phase that out.

What is SFR and AFR?

When thinking about using multiple graphics cards for gaming, you might imagine both cards working as one, pooling their resources and effectively giving you double the power.

By using SFR and AFR they each work on a portion of the workload, but you don’t really gain double the power by using two cards.

Split frame rendering is exactly what it sounds like, whenever a frame needs to be rendered, each graphics card will take half of a frame and render them separately.

Just like SFR, Alternate frame rendering is basically self explanatory. Each card renders a whole frame each.

What Are The Gains?

As we talked about before, twice the video card doesn’t necessarily mean twice the power. But what about an increase in performance overall?

Using multiple graphics cards can net you a significant increase in your overall gaming performance. Since you are providing the system with more rendering power it only makes sense.

Unfortunately, not every game will net you those huge PC Master Race performance gains. While GPU software can enable multiple graphics card use during games, it doesn’t mean that they’re optimized for it.

In fact, the game developers have to spend extra time coding program profiles into their software to tell them how to utilize the extra graphics cards. But this is not easily done and takes a lot of time; time that many developers don’t have or would rather spend on something everyone will utilize, like fixing bugs.

The audience size for multiple GPU usage is pretty small compared to those who only use a single graphics card. This means a lot of games that aren’t AAA games may never be able to use the extra power; although, AAA games are the ones most likely to need the extra power to begin with.

Some games have even been known to lose performance when using multiple graphics cards, but there are still plenty of games that support multi GPU.

What are the issues with multi-GPU use?

This is where those certain restrictions come in. When you’re using multiple video cards, they have to communicate with each other very quickly.

A common misconception is that you will get double video RAM with double cards. In actuality, they mirror the data in the buffer. If you’re using AMD CrossFire and have graphics cards of two different VRAM capacities, then it will default to the lowest size.

For example: If you have two video cards, one with 8GB of RAM and one with 6GB and they’re both compatible to be used with each other, both cards will act as if they have 6GB instead of 8 and 6, respectively.

Another common issue is microstuttering. Again, due to your cards having to communicate very quickly with each other, sometimes it can cause issues with your frametimes.

When frames are displayed on your screen, you want that frame there for as little time as possible before the next frame comes up. When multiple graphics cards are trying to communicate, small errors can occur which causes a frame to be displayed for too long, which causes micro stuttering.

Compatibility: The Difference Between Crossfire and SLI

There are a few things to watch out for if you’re thinking about going with a multiple graphics card setup. You can’t grab just any two cards off the shelf and shove them in the case and hope they’ll work (although who hasn’t wished it was just that easy?).

AMD CrossFire only has one restriction when pairing with another card: they have to be from the same generation. For example: An RX 580 can pair with an RX 540, but a 580 can not pair with a 480.

Unlike Nvidia, it does not use a bridge.

Nvidia also requires an SLI bridge for both cards to communicate. This frees up bandwidth from the PCIe lanes. Some cards require a HB (high bandwidth) SLI bridge, so double check which one you need with your card specs.

SLI bridges act as a physical connector between multiple cards. This allows them to communicate with each other over the bridge, instead of using precious bandwidth on your PCIe lanes.

You will need a power supply with adequate power and pins to allow for SLI. Your power supply will list if it’s SLI/CrossFire compatible. If you’re not sure how much power you need for two cards, I recommend using Cooler Master’s calculator.

Your motherboard will also need adequate PCIe lanes to run both cards. The motherboard specs will also list if it will work with SLI/Crossfire.

Why Use Dual-GPU Setups for Gaming?

We’ve talked about the performance gains of a dual-GPU setup, along with the requirements and issues. Knowing what we now know, who should choose this option?

One obvious concern is cost. While graphics card prices have come down, they are still expensive. There are three main situations I see someone using a SLI or CrossFire setup.

First, is someone who is on a budget, but can’t afford a more powerful card now, and also can’t afford two lower power cards. They can buy something like a 1060 now, and get another 1060  down the road when they can eventually afford it.

Second, is a similar setup to the first, except this person has a lot of money and just wants to run two powerful graphics cards.

Lastly, is someone who may have just come into another card that pairs with whatever they’re currently using. Whether they happened to get a good deal on a used one, or maybe they won one in a contest. In which case, why not?

Personally, I run a single card setup, but I’d love to hear back from you guys and see what everyone else is running.