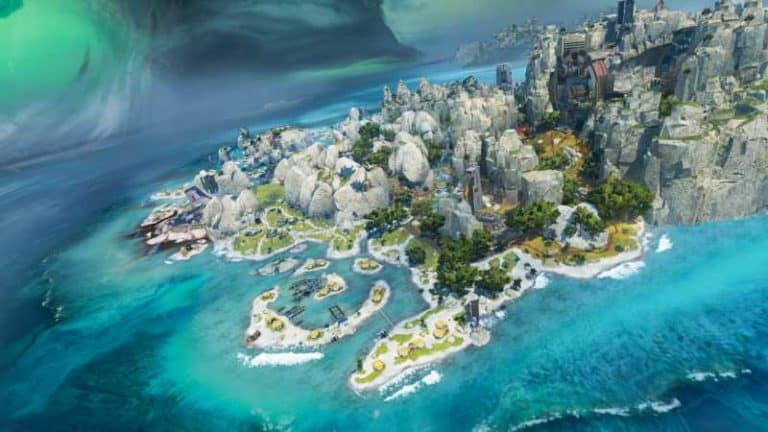 The stunning island map is located on the oceans of planet Gaea, surrounded by jagged rocks, turquoise waters and dangerous wildlife. Speaking of the wildlife, in an all-new type of encounter, you’ll be able to tackle the creatures of Storm Point at Wildlife Nests, with successful encounters rewarding players with loot.

The map also features a huge range of beautiful POIs, from the shady cover of Cenote Cove, to the colorful greenery of Checkpoint. See them all on the official blog post.

Following the confirmation that Ash is indeed what remains of Dr Ashleigh Reid, fans have been keen to see her brought into the action. Sure enough, Ash finally becomes a playable character in the Escape update. Dr Reid’s brain was put into a simulacrum shell following her demise, and Ash was born.

Ash’s Tactical Ability will be Arc Snare, in which she can throw a spinning snare that damages and attaches to the first nearby enemy. Her Passive Ability, Marked for Death, shows the whereabouts of the deathboxes of recently killed players. Finally, Ash’s Ultimate Ability will be Phase Breach, a similar ability to Wraith’s Ultimate, except it is a one-way portal.

While there is loads more to be announced with the release of Escape, the only other news so far is that there will be a new SMG – the CAR. In a first for Apex Legends, it will be capable of firing both light and heavy ammunition, but that’s all we know about the CAR so far.

According to the official Apex Legends Twitter profile, the next season is going to start on November 2nd, 2021. A release time for the update has not yet been announced, but Emergence was launched at 10am PST/1pm EST/6pm BST, so we can probably assume Escape will be released at a similar time.