Home » PC Tech & Gaming News » Could this be The End of Fortnite?

Could this be The End of Fortnite?

Prepare for another black hole as Fortnite comes to an end. Again. 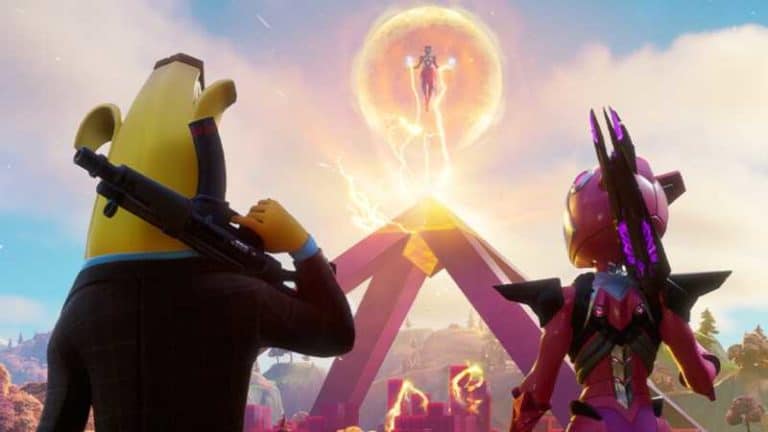 Table of Contents hide
So what is The End of Fortnite Chapter 2?
When is Fortnite’s The End event?
What to do before The End?

Rumors have been swirling about Chapter 2 ending sooner than expected for some time now, with Epic Games confirming this towards the end of November. So what can we expect from The End of the chapter?

Fortnite’s Chapter 1 was ten Seasons long, and ended with a suitably dramatic event called The End in which the island was seemingly destroyed for good, and Fortnite was offline for over 37 hours. Players trying to log in during this time were met with an ominous black hole and a series of cryptic numbers appearing sporadically.

Of course, it wasn’t actually “the end”, so we can be pretty safe in the knowledge that Epic Games aren’t quitting while they’re ahead and taking down their most popular game this time either – yes, some people did believe that the first time round. Instead, it’s just The Somewhat-premature-at-just-8-Seasons-long End of Chapter 2.

So what is The End of Fortnite Chapter 2?

You may have noticed that ominous gold orb floating above the centre of the map for a while now? You know, the one above that really obvious, bright pink, ever-changing mass of cubes? Well, if you didn’t know, that’s the Cube Queen, and she’s pretty keen to take over the Island. We’ve fended her Cube off once before (remember Kevin?), but this time she’s stronger than ever.

The End event will allow up to 16 players to tackle the Cube Queen together, so you can drop in with your whole squad and other players from around the world. While it hasn’t yet been confirmed, players are expecting to have to defeat the Queen using the weapons that have won the various War Effort polls. As with previous Fortnite events, The End will likely last approximately 15 minutes and will be entirely interactive, before Fortnite enters an extended period of downtime once again.

When is Fortnite’s The End event?

At least the Apollo Island residents know when The End is coming. Is that a good thing? Either way, The End is going to take place on December 4th, 2021. Here’s a rundown of the times in a few regions. If yours isn’t here, it’s taking place at the same time globally, so just work this into your timezone!

What to do before The End?

Since the current Battle Pass and challenges will all end at the end of the Season as usual, there’s still plenty to be getting on with before the Cube Queen descends upon Apollo Island. If you’ve not already completed your Battle Pass, there’s still a few days to earn that XP and level up as much as you can. With the new Battle Star system in place as well, make sure you don’t leave any earned Battle Stars unspent!

Even if you have long reached level 100 or more, don’t forget there are loads of great bonus skins to earn this Season on top of the standard Battle Pass, as well as all the Toona Fish Color Bottles, and character color styles and Rainbow Ink. Make sure you’ve got your hands on the Cube Queen cosmetic items as well, and even complete your fish and Character collections.

Also, because the season is ending earlier than planned, everyone who logs in before the end of Chapter 2 will receive a one-off boost of 225,000 XP.