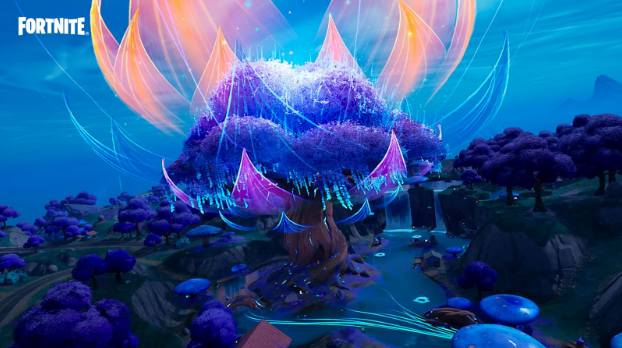 Fortnite Chapter 3 Season 3 is finally here. The new season features a brand new location, several gameplay changes, and more. The Screwballer coaster has everyone excited and the new patch has some of the most content Fortnite has ever received in a single update. Here is everything you need to know about Fortnite Chapter Three Season Three.

The Reality Tree has blossomed on the Island, forming a new biome in the process! This location called Reality Falls is a lush forest of mushrooms and trees. Reality Seed Pods are spreading from the Reality Tree. Plant a Reality Seed to grow a Reality Sapling. Saplings bear better loot each time you weed them, so keep weeding a sapling until it bears Mythic loot. If you pick up a Reality Seed while you already have a sapling planted, throw the seed to teleport the sapling to where it lands.

The Two-Shot Shotgun is a burst pump Shotgun capable of fierce damage. If you land both shots of its burst, you can deliver a devastating punch. The new Designated Marksman Rifle (DMR) falls between an Assault Rifle’s and Sniper Rifle’s range. Players skilled with the weapon will be able to take out enemies with deadly precision. The Hammer Assault Rifle is a slow-firing assault rifle that can take enemies down from long range if you can control its recoil. It is a punishing weapon to use but rewards players that are skilled enough to use it.

Storm Sickness Added to the Game

The Storm is now a lot more dangerous in the new update. If you stay in the Storm too long cumulatively in a match, you’ll develop Storm Sickness, an ailment that accelerates the Storm’s decay of your Health. Players will receive a warning if they’re close to getting it. And fortunately, the cure for Storm Sickness is simply exiting the Storm. If you re-enter it, however, it’ll immediately affect you again. This makes early rotations even more important as a lot of players ignore the dangers of the Storm as they can often outheal it using health items.