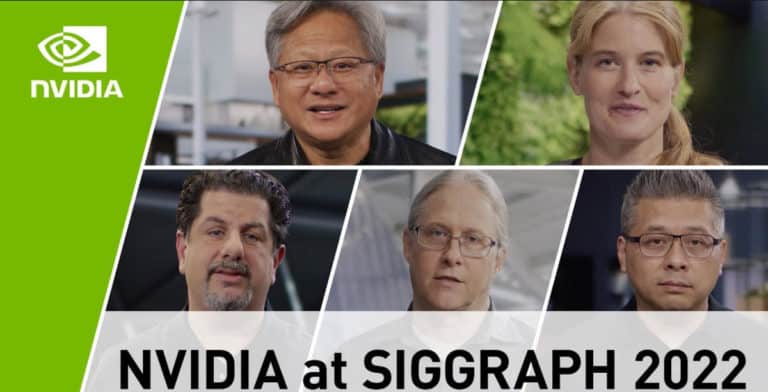 Table of Contents hide
Nvidia SIGGRAPH 2022 rundown
Neural graphics
Metaverse
Computing platform
Avatars
Back to you Jensen
Wait, is that it?

SIGGRAPH is a celebration of all things computer graphics and Nvidia is part of that. So, its a special address is something to look forward to.

Although it is likely the main focus is AI and enterprise solutions. So those looking for the RTX 4000 series (like us) are likely to be disappointed.

The start is the Computex 2022 animation. And Jensen going through the history of Nvidia graphics cards. Starting with the 2000 first GPU and the RTX launch at SIGGRAPH 2018.

Pointing out how neural graphics and AI are developed on Nvidia cards. Bringing a lot of improvement and analysis.

Jensen also analyzes internet 3.0 and metaverse. Being able to use AR and computation to digitally make your twin and optimize your life. Clearly, Nvidia has a lot of graphics power for the USD engine to run the omniverse.

Robotics AI is also on Nvidia’s radar. With avatars a focus to take over your entire life or distract you while you drive.

Sonja takes us through how to bring your 2D pictures of 3D objects into 3D objects on your PC, with AI learning how to do so.

The same is for player movement, after learning how you run and move naturally. These do make animations and importing objects much easier for users, and the results seem rather impressive.

There is a lot of research being done in AI graphics with many papers with universities being worked on.

When you want to escape the real world for the same thing on electronics.

Compared to HTML, this requires a standard way of description in the world. Based on the USD system Pixar started itself.

Nvidia aims to integrate glTF as a plugin into USD. Improving and comparing it like how HTML has improved over the years since its invention.

It is also announcing an open-source compatibility tester for the USD space. Hoping that other people do in fact want to adopt this new tech.

The new Nvidia Omniverse and metaverse require new technology-enabled to be able to run. From edge to cloud it is run on Nvidia hardware. One of its more profitable technologies so keeping interested in it is key.

There is a look into material and physics simulation in the renderers. The MDL open source announcement will help with the material and layers of it for simple renderers.

It has announced Neural VDB for values and underlying tree volume. So no longer will simulations take 15GB of memory but less than 1GB.

Up to 100x smaller footprint is a much less impactful size. Improving its nanoVDB from last year. There are many uses in medicine, science, and geography.

Nvidia Machinima has added features from a few games for the ability to include them in the animation.

Synctwin allows for industrial digital twins. So you can improve the workflow of factories and workplaces.

There is Omniverse Audio2Face is an AI model to recreate faces. With updates allowing you to create emotions on the avatar.

Along with emotional performance to match the audio input. Improving the reactions from previous versions.

The roadmap aims to add the possibility of using photos to create your avatars. Also to be able to learn muscle movements from video and create hair strands and motion from learning on it.

Nvidia also shows off responsive digital avatars in the metaverse as part of Omniverse Ace. Answering questions asked through a microphone.

Back to you Jensen

Jensen summarizes Nvidia’s announcements so far in its SIGGRAPH 2022 special address. Wishing us a great SIGGRAPH it seems to be the end of the talk.

Wait, is that it?

Yes as far as we can tell that’s it from the Nvidia announcement. They didn’t lie, it was in fact all about AI and the 3D internet in the metaverse.

Just like Computex, there is a bit missing for the casual gamer. But it may be down to the delays in launching the next gen of cards.

With too much stock of 30 series, it is likely to push back the launch. Especially since there are still 15 mins that would fit well into the hour mark at this announcement.

Disappointed but not surprised.