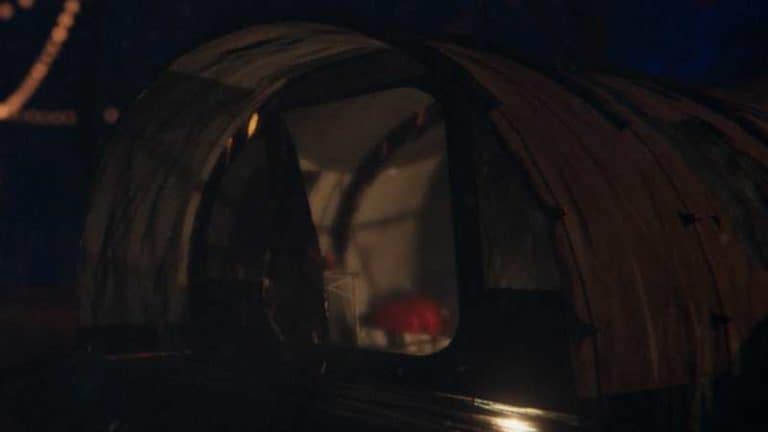 Phasmophobia, the petrifying VR and non-VR game in which you take on the role of a paranormal investigator, must be one of the most perfect games to get a Halloween overhaul. Thankfully, that logic is not lost on Kinetic Games, who have been working hard on Phasmo’s biggest update yet… just in time for All Hallows’ Eve. Take a look at the key patch notes from the Phasmophobia update below.

Phasmophobia‘s 0.4.0 Nightmare update was teased on Kinetic Games’ official Twitter account on October 22nd, 2021. Many believed the image hinted at a new campsite map, with fans having been desperately seeking a new map for some time. ‘Many’ have now been confirmed to be right, but the exciting new map is just the apex of these game-changing Phasmophobia patch notes.

Though every game in Phasmophobia is different, players have still been tired of the same surroundings for quite some time. That’s all about to change, as the eerie Maple Lodge campsite creeps into the map playlist.

Maple Lodge is a medium-sized map, putting it in the same scale as the High School and Prison maps. It is the first map in which you’ll be hunting down your ghost outside, so features picnic areas, tents, a log cabin and an eerie lake instead of rooms.

The new map brings with it a warning that, while you will still be able to play it on outdated hardware, you may see FPS drops as it comes with more detail and higher object density than Phasmo maps of old. If you do see these FPS drops, you should also be aware that Kinetic plans to bring the older maps up to the same standard in the near future.

On entering Maple Lodge Campsite, you’ll also notice that the new map comes with a new truck mini-map design, which will also be rolled out to existing maps in time, according to the patch notes.

Shortly after two new ghosts were added in the Exposition update, another four ghost-types will now be added thanks to Nightmare.

The Twins, Onryo, Obake and Raiju bring the total number of ghost-types you can encounter to 20. These four new ghost types will be have increased spawn rates throughout the Halloween period. We know The Twins can be discovered when there is an EMF level of 5, interaction on the Spirit box and freezing temperatures, but you’ll have to head into the game to find out more about the likes of the Raiju and Obake.

In a further effort to make every new contract feel different from the last, weather has now been implemented to the game. Every time you start a contract, you could be tackling with fog, heavy rain or even snow. While this will be particularly pertinent in the new outdoors campsite map, the changes aren’t just aesthetic, so will change every game. Wind and rain make it difficult to hear, while temperature changes make it harder to decipher the ghost’s location. Thick fog will even impair your visibility.

As well as changes to the three existing difficulties, a new Nightmare difficulty has been added. In this new difficulty, ghosts will not reveal all of their evidence types, meaning they could be far more easily mistaken for the wrong type. As well as this, truly gifted ghost hunters will have to test their mettle against longer hunt durations and fewer hiding places. Check out all of the difficulty changes and loads more in the full Phasmophobia patch notes.

The Nightmare update will be available to download on October 25th, 2021, from 8am PST/11am EST/2pm BST