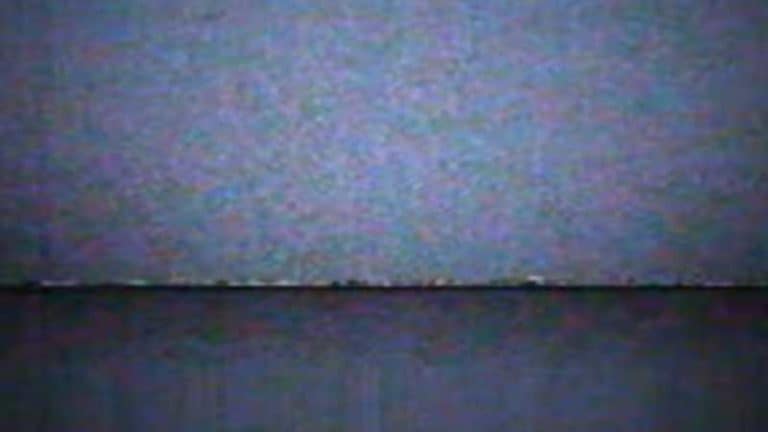 The Pokémon Company has released another sneak peak at 2022’s new Pokémon game, Pokémon Legends: Arceus. This time, though, they are clearly getting in the spirit of spooky season by releasing some horror-movie-esque found footage.

The story behind this clip is that it has been discovered by a researcher in the Canalave Library. During the trailer, an unknown person tells us about a “strange device,” and that they hope to record some footage of wild Pokemon with it. As they stroll across a snowy expanse, the snippets we do catch through the otherwise indecipherable footage shows mainly the surrounding habitat. As the cameraman continues to traverse the landscape, they venture off into a dark forest, thick with trees and a “mysterious aura.” Clearly an area of interest considering what happens next.

We don’t know when the footage was supposedly filmed, or by whom, but we do get the tiniest of glimpses of some new Pokémon. Despite the terrible quality.

It’s pretty clear from the footage that Snowrunt is a Pokémon that resides in the Hisui region. While the footage’s subtitles read “..Those are wild …runt,” two cone-shaped Pokémon dart across the screen. They are unclear in the grainy footage, but, while they could be Hisuian variations of the ice-type Pokémon, they don’t look to have any unique features to that of the shivering Snowrunt we already know and love.

Another hint that we get in the trailer is that there is likely to be some sort of Vulpix variant in the Arceus Pokédex. We know that Pokémon Legends: Arceus is based in the distant past, in the Sinnoh region long before it was known as the Sinnoh region, and yet the speaker in the shaky clip think they see a Vulpix. While this doesn’t confirm that Vulpix will appear in the game’s dex, it does confirm that Vulpix was a discovered Pokémon at the time Arceus takes place, and that it wouldn’t be a shock to see it in Hisui. Of course since this is unconfirmed, we don’t know if it would be a normal or Hisuin variation if it does appear. However, as there is already an Alolan Vulpix, it might be interesting to see yet another variation for the cute Fox Pokémon.

Towards the end of the clip, after the mysterious stranger heads off into the trees, they clearly come across some new discoveries. One Pokémon, as mentioned above, looks similar to Growlithe and Vulpix, but is neither. It is described as having fluffy white fur on top of its head and around its neck and round yellow eyes. Most people have deduced that this is going to be Hisuin Arcanine, since Hisuin Growlithe has already been confirmed. However, some people think this unknown Pokémon could be a variant of Zoroark or Absol.

Ultimately, the person behind the camera ends up seemingly incapacitated by yet another mysterious Pokémon, asking “W-What’s that?!” before yelling as the footage cuts to black. Since they ask “What’s that?”, we can assume there is a second Pokémon in front of them as they were already looking at and describing the Growlithe/Vulpix lookalike. Given that the main USP of Arceus is the Alpha and Noble Pokémon, could we perhaps be close to finding out more about these mystifying monsters?

There are still only a small number of confirmed Pokémon for the Arceus dex, but this does already include Mythical Pokemon Arceus and new Hisuian variants and evolutions. Take a look at every confirmed Pokemon on the game’s official webpage.