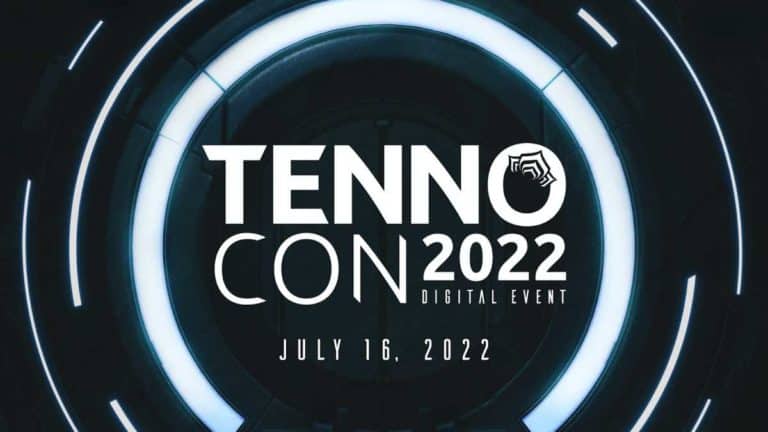 Table of Contents hide
What’s going on at Tennocon 2022?
Art and Cosplay Contests
Dojo Showcase
News and exclusive reveals
TennoCon 2022 Schedule
Will Tennocon be celebrated throughout the week?
When is Tennocon 2022 taking place?
How to watch Tennocon 2022

Fans of the action role-playing franchise have already been kept busy this year with huge updates to the mainline Warframe game, an anniversary event celebrating nine years of Warframe.

The New World follow-up Angels of the Zariman released today (May 5, 2022). However, Digital Extremes aren’t done yet, with loads more to come before the end of 2022, and Tennocon is just the pinnacle of Warframe’s massive 2022.

Popular art and cosplay contests return to Tennocon this year, but since the event is digital again, entries are open for remote application now. Enter your fan-art or custom cosplay entries now using this online form.

Another of Tennocon’s most popular events is the Dojo Showcase. Player Clans have been submitting their custom Dojos throughout the year, with the very best designs picked to feature in the Star Chart each month.

If your Clan’s Dojo has been featured in the Star Chart this year, one of your team can expect to receive an in-game alert that you are eligible to submit your design for a digital tour during Tennocon 2022.

The Spring Featured Dojo Contest is still underway, and winners will also be eligible to apply to be featured during Tennocon, meaning there’s still a chance for your Clan to get involved! Entries for the Spring contest close on May 20, 2022. Find out more on the Warframe forum.

Digital Extremes has also revealed that we can expect some exclusive Warframe news during the event. While we don’t know what this is as yet, we can hope for some exciting content updates coming up at the end of 2022 and into the new year.

With 2023 the ten year anniversary of Warframe, we could also perhaps expect to hear some news about what events, updates and giveaways will take place in celebration of the occasion.

To give you an idea, The New War, 2022’s massive Warframe expansion, was revealed during last year’s Tennocon.

Again, with this year’s convention leading up to the game’s tenth anniversary, we’re keeping our fingers crossed for something even bigger.

As of July 11, 2022, Digital Extremes have released the upcoming schedule for TennoCon 2022 with a 12:00PM ET start time. The schedule is expanded into more depth over on the Warframe website.

However it’s to be noted that 5:00PM ET is when keynotes begin for Warframe in 2022 and beyond, it’s highly anticipated that the Duivari Paradox will be expanded on since it’s reveal at the Summer Games Fest.

Will Tennocon be celebrated throughout the week?

Yes! Since July 4, 2022, Digital Extremes have been releasing goodies across the game in celebration and lead up to the convention set to take place this Saturday. This includes the likes of: Syandanas, Ephemeras, Credit Boosters and other Resource and Affinity boosters! The full list of what can be collected during this week is here.

When is Tennocon 2022 taking place?

This year’s Tennocon convention will take place in a one-day event on Saturday, July 16, 2022, and, as we’ll detail below, can be watched online for free.

Tennocon 2022 will be broadcast live from London, Ontario on July 16, 2022, to Warframe’s official social channels. Be sure to follow the Warframe Twitch and Youtube channels to make sure you don’t miss a moment.