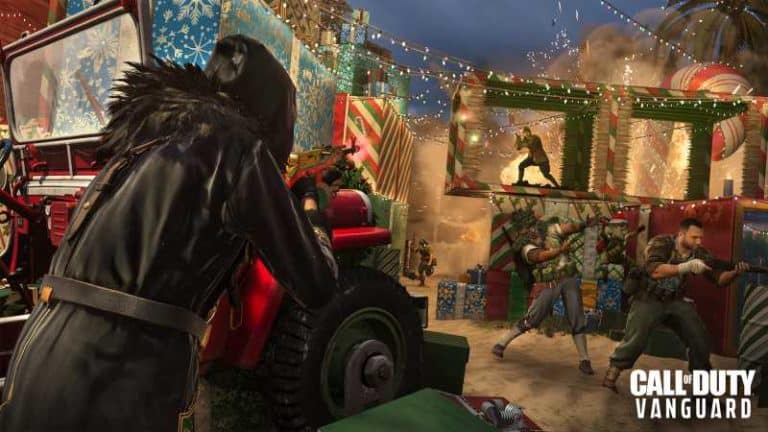 The latest Call of Duty Vanguard update has introduced a brand-new holiday-themed event, and Activision are letting everyone join in the festivities. Well, it is the time for giving, after all.

The Multiplayer Free Access weekend is taking place from December 16th, and will run for a long weekend, ending on December 21st, 2021. The Free Access event will give players a chance to try out Vanguard Multiplayer without buying the game. Even better, it’s during the Festive Fervor event, so everyone can drop in and check out the seasonal maps, run into the very green Elf Team Six, and get hunted down by Krampus.

What is Call of Duty Vanguard Multiplayer Free Access?

The Multiplayer Free Access weekend is an event in which anyone can play Vanguard Multiplayer playlists, even if you don’t own Call of Duty Vanguard. This gives players a chance to try out the game before committing to buying it. This isn’t the first time there has been a Free Access event in Call of Duty, but this one is different in that it coincides with the COD Christmas event, Festive Fervor.

Since the free access kicks off before Festive Fervor, it will launch with normal playlists. You’ll be able to try out the likes of Team Deathmatch and Domination on the newest map, Radar, as well as Das Haus, Numa Numa, Shipment and more. Following the Festive Fervor update at 9pm PST/12am EST/5am GMT, the gift-giving Armageddon mode and gift-wrapped Shipmas map will be added to the roster.

Later on in the weekend, the Shipmas 24/7 playlist will be added, which is, you guessed it, all the Shipmas you could ask for. Every multiplayer mode, but dropping into the seasonal Shipmas map every single time. Whichever playlist you choose, you’ll be privy to the holiday festivities, so keep an eye out for Elf Team Six and the devilish Krampus.

Will I keep my progress after the Vanguard Free Access weekend?

If you do participate in the Free Access weekend without owning Call of Duty Vanguard, you will level up and be able to complete challenges and upgrade weapons as normal. If you then decide to purchase the game during or following the event, all of your progress will carry over, so you won’t have to worry about losing all your hard work.

If you already own Vanguard, then there’s still something in it for you! Not only does this weekend offer free access, but it’s also a Max Double XP weekend as well. So whether or not you’ve already bought COD Vanguard, you will reap the benefits from this Christmas gift.

Those who already own Vanguard, or purchase it before December 31st, will also receive ten Season One Battle Pass Tier skips, a 10% XP Boost all season, and all additional 24 Vanguard Season Six Battle Pass Tiers. For more details, check out the Call of Duty blog post.

The Free Access weekend will take place from December 16th to December 21st, 2021. See below for exactly when the event will launch and end in your region, and if your region is not listed, it is rolling out at the same time globally so can be worked out from the times below!