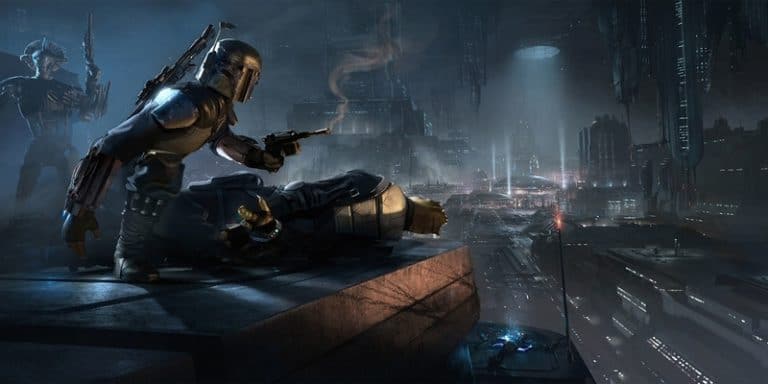 Table of Contents hide
A departure from the norm
Star Wars 1313 – a game out of time?
The Prequels Revisited
Mandalore reborn
Star Wars: 1313 – gone but not forgotten

Star Wars single-player games are having something of a resurgence right now. After a few years of Star Wars Battlefront being the franchise’s big videogame effort, high-profile studios have stepped up to the plate to deliver carefully curated campaign experiences. Star Wars gaming news is everywhere, from the reveal that Respawn are working on multiple Star Wars properties at once, to the overwhelmingly positive response to the Lego Star Wars trailer – despite rumours of heavy crunch at the studio. Even the highly unexpected partnership of Lucasarts and Quantic Dream for Star Wars Eclipse, and a full remake of Knights of the Old Republic. But what could have been the most anticipated Star Wars game of all will sadly never come to be.

Gaming history channel The Vault have unveiled gameplay from cancelled project Star Wars: 1313 for their 6th anniversary. This game has been mourned by fans for years now, never able to live up to the potential of what could have been. But did Star Wars: 1313 simply fall through the cracks at a time when the franchise was languishing? Or was it a potential classic that was sadly in the works slightly too early to ride a cultural wave to success.

A departure from the norm

Star Wars: 1313 would have been a drastic departure from most other Star Wars games. Players have had plenty of chances the wield a lightsaber as their choice of Jedi or Sith. And if not that, then they were piloting X-wings and more as hot-shot resistance pilots. But Star Wars: 1313 was set to focus on a seedier side of the galaxy far, far away.

Star Wars: 1313 was so named because it took place on level 1313 of Coruscant. A bustling underworld metropolis far from the planet’s surface. The game was intended to have a Mature rating, reflective of the types of stories the team most wanted to tell. With its setting and Content, Star Wars: 1313 looked to have more in common with 2006’s Prey that it did any prior Star Wars game.

Sadly, these bold swings did not end up paying off; by 2013 the game was reportedly experiencing production issues. When Lucasarts was acquired by Disney, the studio itself was shuttered and its staff laid off. An ignominious end for one of the most intriguing Star Wars games of all time.

It is particularly ironic that the Disney acquisition was the final nail in Star Wars: 1313’s coffin. The trajectory that they have taken the Star Wars franchise on has put it in a place that would have made Star Wars: 1313 the perfect game to release in 2022.

Alongside the franchise’s resurgent popularity, there are multiple factors that could have made Star Wars 1313 a bigger hit if it was released now.

Fan opinions on the different eras of Star Wars are in a different place than they were at the time. Before the release of the Sequel Trilogy, the idea of setting a game on Coruscant- one of the Prequel Trilogy’s most famous locations – was a risky endeavour. But while potentially controversial at the planned time of release, this location would have been more warmly received now. The prequel trilogy has undergone something of a reassessment of late. While by no means great – or even necessarily good – cinema, they brought too many fresh ideas and fun moments into Star Wars to be discounted altogether.

The biggest missed opportunity for Star Wars: 1313? It was ahead of its time in terms of Mandalorian content.  Disney+’s The Mandalorian and The Book of Boba Fett have turned an intriguing pocket of Star Wars culture into one of the focal points of its ongoing narrative. Now more than ever, fans would have relished the chance to get under the helmet of a bounty-hunting Mandalorian character. And who better in that area than Boba Fett himself?

Sadly, this may be all players ever get to experience of Star Wars: 1313.    But at the very least, the appetite for more bounty hunting stories is clearly there in Star Wars’ audience. Even if Star Wars: 1313 is never returned to, it could serve as the building blocks to something even better.