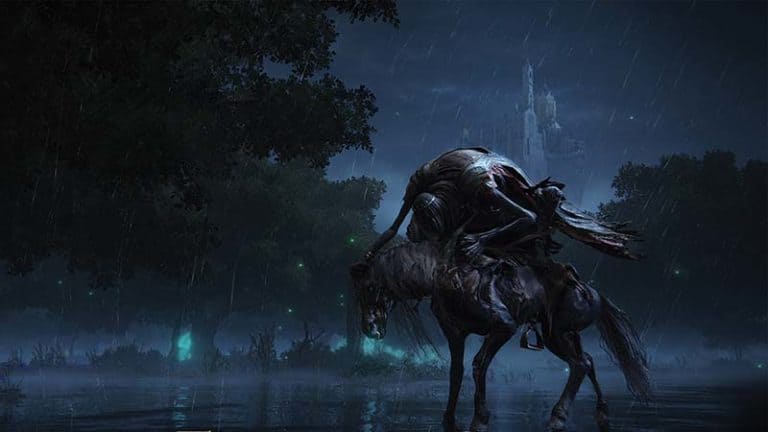 The Elden Ring gameplay reveal is over and done with and you can rewatch the video below along without live updates as it happened. What did we think of it? It’s looking pretty smart. The environments and lighting were especially nice. The voice acting wasn’t over-wooden and there looked like there will be a few interesting plot-twist decisions to make along the way.

With a run time of a little over 15 minutes, we were treated to a look at environments such as dungeons and castles and biomes such as forests and mountains.

It packed quite a lot in to be fair, even if it didn’t always segway the parts together seamlessly. Did it do its job? Are we more excited for Elden Ring than we were before it started? Yes, we probably are.

Into the last three minutes of waiting time now. The dramatic music continues to rise…

14.01 GMT – And we are off – A nice bit of horseback riding to get us underway. Nice and peaceful through the river, right up to the point we get attacked by a massive dragon.

14.02 – A few sword strikes in the face and the dragon is dispatched. Now we have moved don’t to see some of the voice acting and a little bit of chat between the main character and an er, thing.

14.04 – Now we are learning about the map and how it works with map markers. It looks very cool to be fair. You can place beacons on the map that then appear in your worldview. You can ride your horse into ‘spirit springs’ to go flying through the air. That’s a bit weirder looking. “It allows for a great deal of verticality”. We never realized we were missing that while horseriding.

14.06 – Now we are prepping for some combat with a little crafting followed by a period of stabbing. Now we are seeing unique attacks that can be got at by switching weaponry. Again it looks beautiful. You can summon spirits to help while fighting too.

14.08 – Now we are seeing some stealthing through the woods. It looks like Autumn and again looks very nice indeed. Woah… that’s a big, big boss riding a big thing but we are now seeing some co=op gameplay as both fighters take on the enemy.

14.10 – Time to head down into the catacombs and dungeons. At the risk of repeating myself, it looks cool. The lighting is very nice, especially when it changed with the main character extinguishing his torch.

14.11 – Getting towards the end now with a creepy girl in a hooded cloak. Hello, hood off and now she’s offering us a gift. Oh, she’s faded out. Was just getting interesting.

14.13 – One of the NPCs is now giving us some advice on how to sneak in past the guards. Do you trust him though? I have a feeling we won’t find out today.

14.14 – Actually, we should have listened to him. Oh well. Now we are up towards the top of the castle fighting on narrow ledges. Some of this looks tricky to navigate. And some of the undead enemies are slow enough to just run past without bothering with them.

14.15 – a little bit of Assasin’s Creed-esque parkour and we get to climb through a window and have a chat with a chap with an English accent.

14.17 – We are now getting a very tasty-looking cut-scene leading to another battle with classical opera for its soundtrack. You can’t say this isn’t dramatic.

14.19 – And we are done. ‘The Tarnished will soon return’ we are told and the narrator says we don’t have long to wait until release date and they will reveal more soon.

That was cool as far as trailers go. We are now getting ads for the 25th February 2022 release date and a look at the collectors and digital editions. And that brings it to a close.