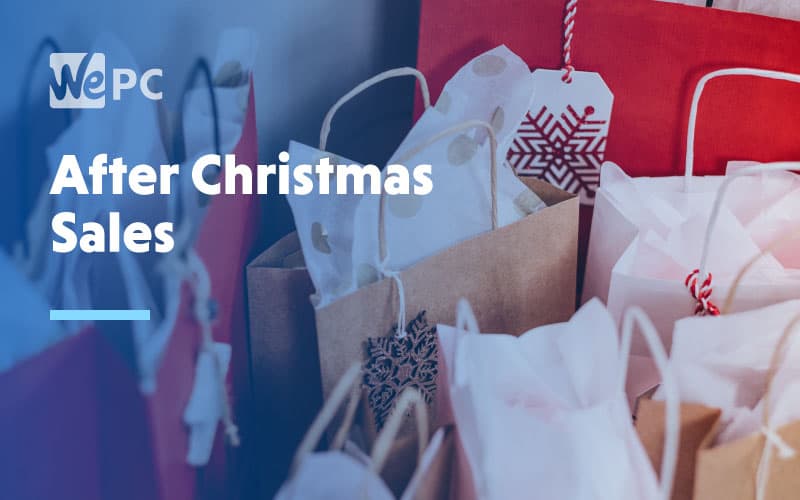 As we grow closer to the end of 2019, we get one last chance to snag ourselves a fantastic bargain on one of this year’s best selling products. That’s right; it’s the after Christmas sales!

If you thought the deals were over for 2019, then think again! After Christmas sales play host to some great bargains across the entirety of the tech industry. Yep, that pretty much includes consoles, laptops, monitors, PCs; you name it, there’s a big chance it’s going to be on offer between now and Jan 1st.

For that reason, we’ve decided to create this comprehensive guide to the best deals in the after Christmas sales. That means you won’t have to worry about trawling the internet for the best offers around; we’ve already found them for you!

What To Expect From After Christmas Sales In 2019

Every year consumers see the same major sales events come and go, but there are only a few sales that are really worth your effort – and the after Christmas sales are definitely in that few!

We saw a huge selection of top deals on consoles last year with both PlayStation and Xbox seeing as much as 35% off their RRP. That also included a bunch of console/video game bundles as well as standalone consoles.

This time last year, we were starting to see the first monitor deals come through with big brands like LG, ACER, ASUS, and Sony having hundreds of dollars off.

Because laptops are one of the most expensive hardware items on the market, it’s always good to know that deals can be snagged at certain times of the year. After Christmas Sales usually play host to plenty and last year saw a whopping 20-40% off some of the biggest sellers.

Most people probably think sales opportunities have now dried up for 2019, especially with Black Friday only just coming to a close a couple of weeks ago. But you’d be wrong.

Most retailers will start to gear up for Christmas sales right about now, meaning you have to act quickly to never miss a deal. One of the biggest retailers to host after Christmas deals this year is Amazon.

We’ll be showcasing all the biggest and best deals they have to offer right here, in one easy-to-navigate article. That means you don’t have to waste any time browsing through endless Amazon pages. Our team of PC enthusiasts has done all the work for you!

If you’re a bit late to the party when it comes to deals, don’t worry, this page won’t just be covering after Christmas sale. Oh no, we’re also going to be covering a whole bunch of January sales as well.

So, there you have it, our comprehensive guide to the best after Christmas deals the internet has to offer. With Christmas being such a stressful time of year, we decided to try and make your life that much easier by showcasing all the best deals in one place.

Looking for a particular product this year? Why not leave us a comment in the section below, and we’ll see if we can find a discount on it! Better still, why not jump over to our Community hub where you can start a thread and discuss topics with likeminded people.