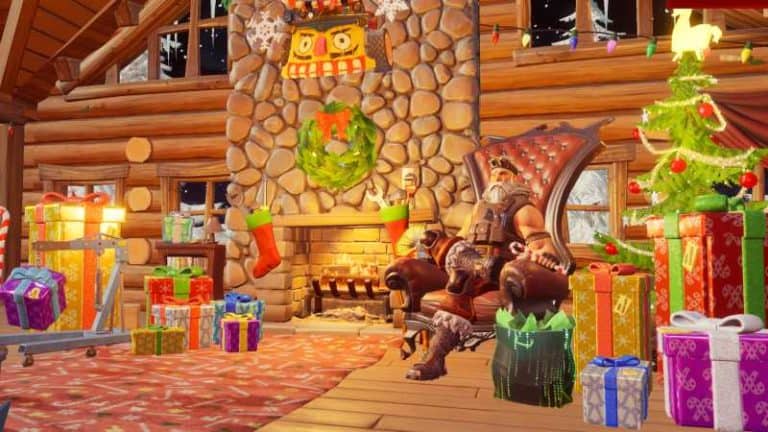 It’s apparently the most wonderful time of year, as every corner of the pop culture world steps into Christmas. As such, we’ve come to expect our favorite games to implement Holiday events or updates, and most of them do.

Fortnite is one of those games, and has developed a sort of tradition with its annual Winterfest event, during which new challenges and spectacles are accompanied by a sort of in-game Advent calendar, giving away a new, free cosmetic item every day. It might be a little later than we expected, but Winterfest 2021 is finally here, and your Fortnite freebies are waiting under the tree.

Sgt Winter and his Winterfest Lodge

The Winterfest Lodge is back for 2021 and looking just as cozy as ever, but in contrast to previous years, the comfy armchair is this year occupied by Sergeant Winter. The Sgt Winter skin, a rugged and pretty jacked Santa-a-like, dates back to the very first Chapter in Fortnite’s history. Having been in the game’s lore so long, many have questioned how he’s even still alive. But, nevertheless, here he is, holed up in his comfy cottage, ready to hand out presents to well-behaved loopers.

In the recognisable and welcoming scene, you’ll see piles of gifts lying around at Sgt Winter’s feet. And instead of having to wait for Christmas Day to open them, you’ll be allowed to open one a day throughout the entire event. These gifts contain all sorts of shiny new cosmetic items, from Outfits and Back Bling, to Gliders and Pickaxes.

As in previous Winterfests, you’ll be able to claim all of the gifts. While only one is available per day, if you miss any, you’ll simply be able to pick two the next day! And, also like previous years, you can pick them in (almost) any order, with the gift tags giving you a hint at what you might expect to get.

Sgt Winter will also be a new NPC on Artemis Island – and the first to actually be able to drive around. If you spot Sgt Winter on your travels, don’t run away, as he’ll be throwing out gifts. Find yourself on the naughty list, though, and you’ll soon be dodging the bullets of his Rangers.

With the start of Winterfest 2021, a new collection of challenges has gone live as well. At the time of writing, only one quest is available, but more will be added each day. As well as XP, there’ll be a sleigh-full of icy cool cosmetic items to claim by completing quests, including the Ffrosty Back Bling and the Ice King Snowmando Board Glider. Of course, the quests will be available throughout the event, but drop in now to get started!

A look at Fortnite’s Winterfest 2021 cosmetics

Masses of new cosmetic items will be available during the event, because not only will you be able to claim items by completing rewards, but there’s also the ever-changing in-game store, as well as Sgt Winter’s Lodge presents. While most are kept secret for now – quite rightly – Epic Games have given a sneak peak at some of the Outfits and items that will be available through the coming weeks.

Krisabelle is a cute festive version of fan-favorite Isabelle. Though in her adorably festive mini-skirt, she looks like she might get a bit chilly out of Artemis map. There’s also the cool-as-ice (literally) Polar Peely. Popping a banana in the freezer can make for a nice treat, but it looks like someone left Peely in there a little too long.

Another Isabelle variant has been released this Winterfest, as well. The chillingly blue Blizzabelle. Blizzabelle is another free-to-claim skin, but there are requirements to meet in order to claim. Check out how to get your own Blizzabelle skin here.

Spider-Man and The Matrix gifts

Hidden among the gifts under the Lodge’s Christmas tree is at least one Matrix-themed gift, confirming the rumor of a crossover. This can be seen in the very obvious Matrix gift bag, just to the right of Sgt Winter’s chair.

As well as this, many renowned leakers have been talking about the potential for some Spider-Man gifts being revealed in the Lodge as well. In some early datamines, it seemed some of the gifts under Sgt Winter’s feet were from an “MJ”, quite clearly a reference to MJ from Spider-Man No Way Home (Michelle Jones as opposed to Mary-Jane, in case you were wondering.) These gifts aren’t present in the Lodge just yet, but with other similar leaks, such as the Matrix gift bag, being confirmed, hopefully it’s only a matter of time before we get a gift or two from MJ.

And, speaking of MJ, you can purchase a new Outfit bundle in the store featuring yet another Spider-Man/Peter Parker variation, as well as MJ herself. Both the Spider-Man and MJ skins are based on No Way Home, in conjunction with the film’s release on December 15th, 2021.

When is Fortnite’s Winterfest?