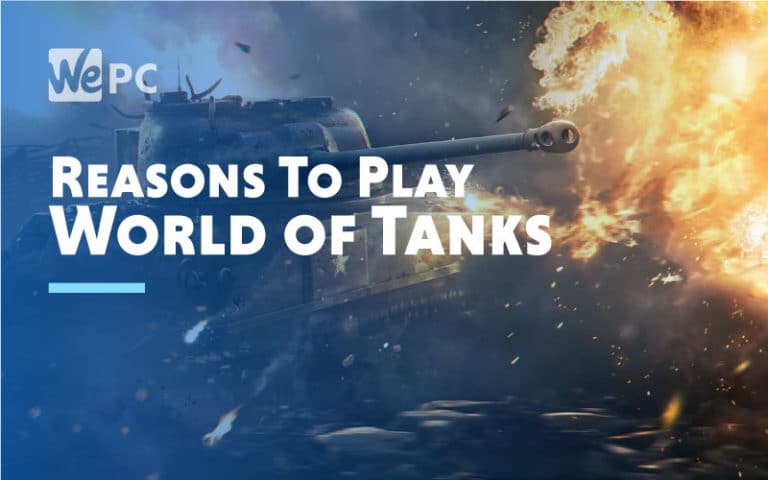 If you’re on the lookout for a new multiplayer game that offers something a bit different from your usual battle games, then maybe playing World of Tanks is the answer you need.

For those unfamiliar with the game, World of Tanks is an MMO that features 20th-century era combat vehicles including different types of tanks and tank destroyers.

Players are dropped into battle on a random map and must take control over the armored vehicle of their choosing. You will have control over the tank’s movements and firing and will be able to communicate with allies via voice or typed chat. Matches are won when you destroy all the vehicles on the opposing team or capture their base.

It’s a simple setup but World of Tanks is great fun and a nice alternative to your typical combat-based games. If you need more convincing, keep reading for our top five reasons why you should be playing World of Tanks.

Let’s start off by answering what is probably one of your first questions. One of the great things about this game to start off with is that it’s free to play.

World of Tanks operates a freemium model so while it is free to play, there’s the option to upgrade if you want to access the premium features. This saves you from falling into the dreaded microtransaction hell that you’ll find in some games. You simply pay for a premium membership and it unlocks all the premium features including new tanks and other features.

You can unlock the specific tanks that you want once you have saved up enough in-game currency, this allows you to pick and choose how you want to make progress at the higher ranks,

If combat vehicles and varied gun options are what you look for in a game, then World of Tanks offers some great choices.

There are five different types of vehicle in this game, including light tanks, medium tanks, heavy tanks, tank destroyers and self-propelled guns (SPGs). Currently, there are over 400 different armored vehicles on offer, based on real-life counterparts originating from Britain, Czechoslovakia, France, Germany, Japan, the Soviet Union, and the United States.

Vehicles can be customized visually or in terms of performance by making changes to the guns, turrets and engines.

In a rock-paper-scissor style of combat, certain tanks perform better against others and vice-versa. If you opt for the lighter tanks you’ll be able to quickly scout out the enemy position and try to flank them, if you choose to go for one of the heavier tanks you’ll lose a lot of your maneuverability but will pack more of a punch and be able to take a couple of hits while you’re at it.

With regular updates consisting of new vehicles to unlock, performance gains and even graphical improvements, there is always going to be lots to see and do in World of Tanks.

The best part about playing a game that is still under the support of the developers is that it has a healthy player count which means finding a game to play with others online is usually quite painless.

If tactical gameplay is something you enjoy in MMO games, then World of Tanks certainly offers this. You will need to be strategic when plotting with your teammates when it comes to choosing different tanks to work together to take down the enemy.

Each map has its own set of vantage points, choke points and defendable positions that you’ll have to learn in order to survive. Don’t be put off if you find this difficult at first, many players have been practicing for years to build up this level of skill.

5. It’s Great to Play with Friends

Once you’ve made your vehicle selections and spent some time customizing and arming your tanks just the way you want them, it’s time to join up with some friends to head into battle.

World of Tanks is a great game to play with friends. You can work together, combining strengths with different tank types to take down the enemy’s vehicles and capture their bases.

There are even regular tournaments and clans that you can either create or join that will allow you to keep in touch with your favorite teammates you meet online.

We hope these top reasons have been enough to convince you to start playing World of Tanks. It’s a simple game with a straightforward objective but it can be a lot of fun and a great way to spend some time with friends.

If World of Tanks is something you’re interested in, why not take a look at our top reasons to play World of Warships while you’re at it.