The Lush Jungle event is part of the Season of Alola 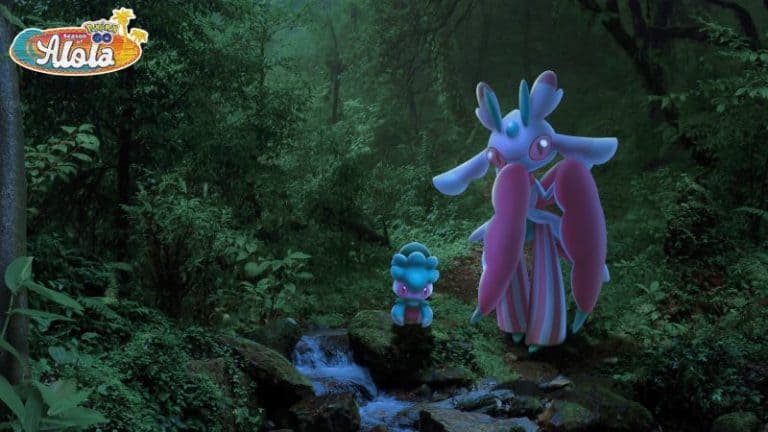 The next part of the Season of Alola is here, and from March 22, 2022, we’ll be exploring the wonders of the Pokémon GO’s Lush Jungle event with new Pokémon Fomantis and Lurantis.

As we wave goodbye to Melemele Island, we instead approach Akala Island, the second of the four Islands of Alola that we’ll visit during this Pokémon GO Season. Akala’s Island Guardian is Tapu Lele, an adorable, giggling Legendary Pokémon with the ability to heal. And not only will we be able to encounter Tapu Lele during the Lush Jungle event, bu Fomantis and Lurantis will also be making their Pokémon GO debuts.

Tapu Lele, another of the Legendary Island Guardians, makes its debut in Pokémon GO. This Fairy and Psychic-type Pokémon is the Guardian Deity of Akaka Island and is known for its ability to hear people and Pokémon with colorful, glowing scales that it scatters around.

The Lush Jungle park spotlight special event will start at 10 am local time on March 26, 2022, running right through until March 27 at 8pm, local time.

This special, end-of-season research will only be available to collect between May 25 and June 1, 2022, depending on when you complete the other four stories.

Pokémon appearing in the wild during the Lush Jungle event

Speaking of grass-type Pokémon, you’ll find that you see a lot more Grass types appearing around you in the wild as the Lush Forest event takes place. See the list of main Pokémon that will be appearing more frequently below. Those with stars next to them may even be found in their shiny form.

Pokémon appearing in raids during the Lush Jungle event

A new rotation of Pokémon will be appearing in raids during the event, as well. Again, the focus here is on grass-type Pokémon. See the full list below, and check out our main article on the current Pokémon GO Raid Bosses to find out which Battle Parties to take into each raid.

Check out even more about the Lush Jungle event, including which Pokémon you can encounter from research tasks, in the original Pokémon GO blog post.

When is the Pokémon GO Lush Jungle event?

The Lush Jungle event will start in Pokémon GO on March 22, 2022, at 10am local time. The event will run until March 29, at 8pm local time, ready for the next part of our Alola region adventure.