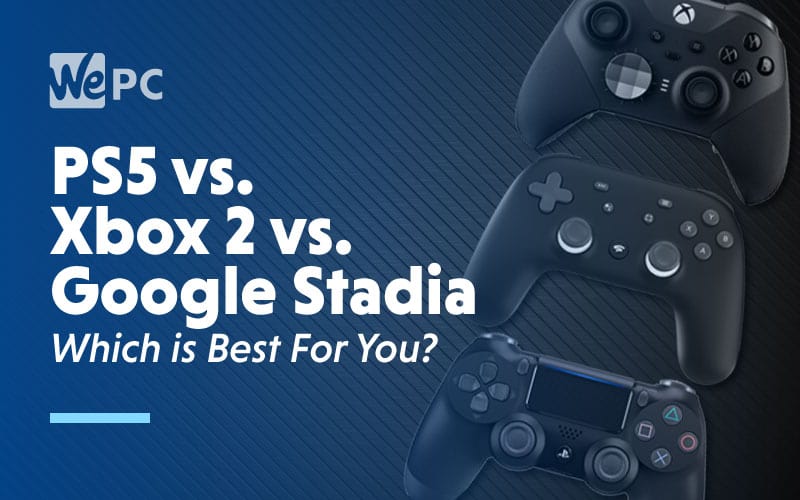 For us console gamers, 2020 is shaping up to be a very exciting time. We have two next-gen consoles launching with the PS5 and Xbox 2, (or should we Xbox Series X) as well as the new game streaming platform Google Stadia getting into full swing. But, with all three of them sharing a lot of similarities, how do we pick which one works best for us? Of course, you could just go ahead and get your hands on all three. But, for those of us who didn’t win the lottery this week, let’s dive into some specifics to help you settle the score once and for all – PS5 vs. Xbox 2 vs. Google Stadia, let’s do this.

Since we don’t have confirmed price points for all the next-gen consoles, we’ve had to do some educated guesswork here. We all know the pain of having to fork out big sums for a new console, which is why the Google Stadia has become so appealing to many. The Founder’s Edition that launches November 2019 comes in at just £119 including a three-month subscription to their Stadia Pro service.

Once the Base version launches in 2020, you won’t need a Stadio Pro subscription to play. Instead, you just pay for the games you want to play – pretty similar to having a PS4 without PS Plus, for example.

Taking both versions of Google Stadia into account, let’s see how the price stacks up against the PS5 and Xbox 2 projections. Since the average lifespan of a console is around seven years, we’re going to compare how the costs accumulate over this period.

While it may seem like the Google Stadia is the cheaper at first, once you look at the yearly subscription compared to the PS5 and Xbox 2, the costs seem to level out over time. And, since you pretty much need that PS Plus or Xbox Live subscription so you can play with friends and get access to the content you want, it’s worth taking this into consideration.

Of course, the yearly subscription prices are likely to fluctuate over the years, but it’s likely that all three services will change by similar levels.

Finally, while you might not have any costs to pay when it comes to the Google Stadia Base edition, you will still need to buy whatever games you want to play on it. And, with many games reaching upwards of $50 these days, the cost can still stack up quite quickly.

With the PS5 and Xbox 2 being solid consoles, their hardware is not going to change over the course of their life. Although, we wouldn’t be at all surprised if they also release some form of “Pro” version a few years into their existence as they have with previous generations.

The Google Stadia, on the other hand, can be as changeable as it needs to be to keep up with evolving technology. But, paying nothing, as you will with the Base edition, means you’ll only be getting the very basic level of specs – you get what you pay for, after all.

Both the PS5 and Xbox 2 have stated they will come with 8K capabilities upon launch. The Stadia will only have 4K when it launches later this year, but by the time the Base version comes out, it will have upgraded that to match its competitors. That’s the beauty of the Stadia though, it can keep updating to stay in the game – even if Sony and Microsoft release “Pro” versions down the line.

Of course, the big selling point for Google Stadia is the fact that you can use it to stream games on any screen from tablets to TVs to smartphones. This will all heavily depend on your connection strength and internet speed though.

As the games will be running at 60fps, this is much higher than streaming something like Netflix, so you’ll need either a solid internet connection or an unlimited data plan if you’re using a smartphone. For example, at 720p you’re looking at around 4.5GB an hour of streaming, at 1080p that goes up to 9GB, and if you want to stream in 4K you’ll use 15.75GB an hour.

And while their system means you can jump into a game in as little as five minutes, if you find yourself without any internet, then you won’t be playing at all. The PS5 and Xbox 2 won’t have this same issue. Although some of their functionality will depend on an internet connection still, once you’ve downloaded or purchased a game, it’s yours to play whenever you want.

Let’s be honest for a hot minute, the most important factor for many of us when deciding which console to buy is the games we’ll be able to play on them. While the majority of AAA games now release across the different platforms, there will always be exclusives floating around to make you invest in a particular console. So, what games will be releasing on just one platform in the next year? 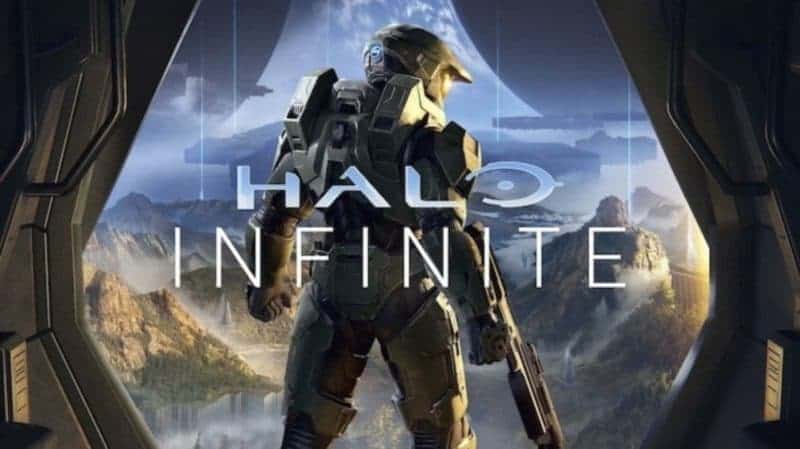 Microsoft already announced that Halo Infinite will be released alongside the launch of the Xbox 2 at the end of 2020. Having the next title in such a big series attached to their launch is sure to help boost sales figures. PC gamers will also be able to get their hands on this, but PS5 and Stadia users will be left wanting.

PS5: The Last of Us Part II 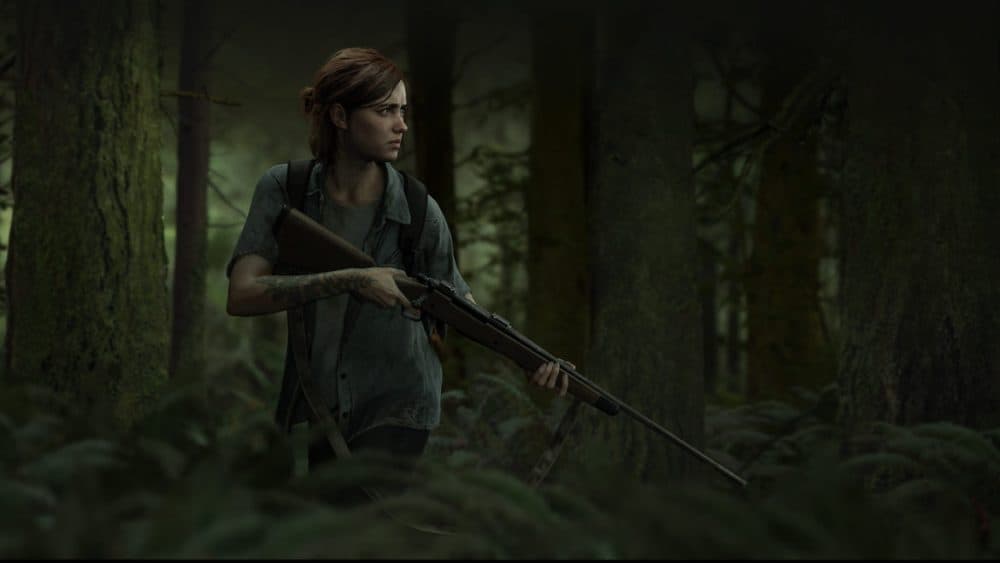 While we don’t have a release date for this game yet, but it will be a Playstation exclusive,  just like the first one. With titles like Death Stranding taking up the big release spots of 2019, and Cyberpunk 2077 launching at the start of 2020, it makes sense to us for Naughty Dog to hold off the release of The Last of Us Part II until the PS5 launches in late 2020. And, after the success of the first game, it will definitely bring people in the new Sony console.

As for the Google Stadia? Well, they haven’t managed to secure any exclusive titles just yet. But, you’ll still be able to play some of the biggest new releases on there such as Cyberpunk 2077, WatchDogs Legion, and Mortal Kombat 11. But, without that exclusive game draw, only time will tell if they manage to attract buyers right out the gate.

Anyone who’s paid for the premium subscription services on PS4 or Xbox One will know that these subscriptions come with free games each month for you to download and keep. This is really what makes it worth it fork out cash just to play online with your friends. We can assume that both Sony and Microsoft are going to continue this service into their next-gen consoles, simply updating the games on offer to work on the appropriate console.

What we don’t know is whether the subscription services will continue to offer previous generation games or only offer games for their latest models. Considering both the Xbox 2 and the PS5 will be backwards compatible to some degree, I imagine they’ll keep on giving out older games, possibly alongside newer releases.

Google Stadia has said they will be giving away “roughly one free game per month, give or take” which doesn’t fill me with too much confidence. I’m one of those people who like to know exactly what they’re paying for. But, maybe that’s just me. But, at just one game a month, they are offering substantially less than Sony or Microsoft, and for quite a bit more money.

Speaking of backwards compatibility, this has been a hot topic of discussion every time a new console is announced. We know now that the PS5 is going to be backwards compatible – all the way backwards. You’ll be able to play those old, forgotten classic PS1 games on this next-gen console; winner.

Xbox have also announced backwards compatibility, but have done so in a very non-committal way. We’re unsure exactly how far back this compatibility could run, and even if it would be across all previous games.

Since Google Stadia is a brand new console, there is no backwards compatibility to worry about. But, with their ability to constantly upgrade software and capabilities, it’s likely that games you purchase today will be forever playable throughout the life of the gaming platform.

And The Winner Is…

Well, it’s pretty subjective. I voted for PS5 hands-down, whereas others in the office would favor the Xbox 2. Sadly for Google, nobody thought they would come out on top. Although a lot of this is down to our collective skepticism at how well a gaming streaming service will actually run.

I guess the best one for you really depends on which games you’re most wanting to play, what platforms your friends are using, and what kind of budget you have to work with.

I still go for PS5 though. Sony, my heart will always be yours. From playing Spice World: The Game to the latest Final Fantasy game, I just can’t quit you.

How about you? Will you be buying the PS5, Xbox 2, or Google Stadia? Tell us in the comments below!