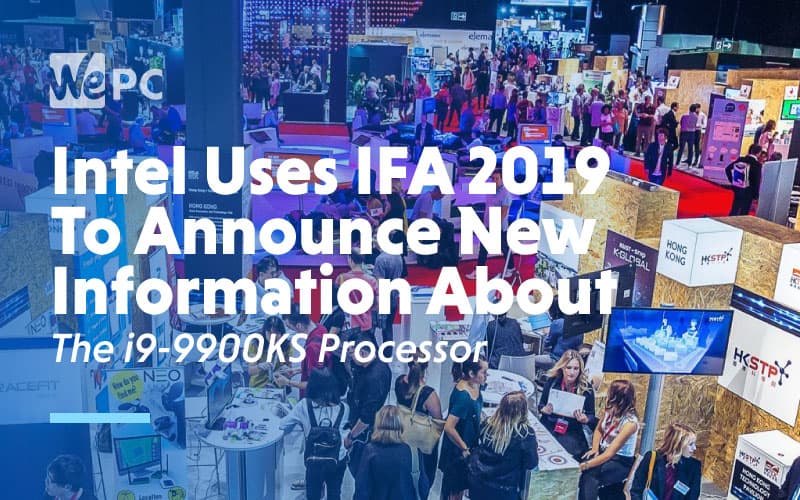 In the battle for the best CPUs, Intel has revealed new information at IFA 2019 about their upcoming i9-990KS (announced this year at Computex), which is set to hit stores later this year. Fighting back against AMD who has been winning the game recently with their new Ryzen 30000 chips, Intel’s new core processor seems like a promising step for them.

The last couple of days have been a whirlwind of CPU news. Intel’s announcement of the new i9-9900KS chips has excited everybody.

So far there isn’t much news on these chips apart from the obvious jabs at AMD, but there have been a couple of developments we’d like to let you know about.

Held every year in Berlin, IFA plays host to some of the biggest tech news announcements each year. Showcasing everything from gaming chairs to CPUs to gaming laptops, there’s always a whole host of new tech to salivate over.

So, how does this chip differ from the 9900K? Intel has essentially cherry-picked the best bits from the 9900K and complimented them with new tech to create their 9900KS. They promise that this new CPU will be able to reach 5Ghz across all cores, going so far as to take a dig at AMD because of this.

“5Ghz means 5GHz” is what Intel is saying. This seems like a pretty obvious dig at AMD around the recent controversy when it came to their Ryzen 3000 chips. Their processors hadn’t been reaching their advertised boost speeds, although they claim this was down to a firmware bug which has now been fixed.

Intel showcased their i9-9900KS at IFA 2019 with a run-through of Hitman 2, showcasing a pretty solid 5Ghz throughout the demo. Pushing to these speeds needs an advanced cooling system though, and Intel used a Corsair 240mm AIO liquid cooler during the demonstration. Without effective cooling, you won’t be able to enjoy the top speeds you’re looking for.

Of course, it’s worth remembering that the Intel chips are still working on 14nm Coffee Lake Refresh Processor unlike the Ryzen 3000’s which are built on Zen 2, 7nm. The newer architecture used by AMD helps to give quite a considerable performance boost.

Intel also shared some updates on their Cascade Lake-X chips at IFA with a slide that promised a release date sometime next month (October). They claimed that these new chips would be able to deliver up to 2.09x more in terms of relative performance than the Skylake-X did. We get the feeling that this means these chips may also come at a lower price point because of these claims of per-dollar performance.

And, while the recently reported leaks of specs for these chips left us feeling somewhat disappointed, we’re taking it all with a pinch of salt. Looks like we don’t have to wait too long to see if our fears are unfounded.

When will we see it?

The all-new i9-9900KS hasn’t been given a solid release date as of yet, but Intel’s chief performance strategist Ryan Shrout has gone on record saying the chip would be released in October.

This is great news for those of us looking at an upgrade. It’s clear that this CPU will be a convincing rival to AMD’s Ryzen 3000 chips, with clock speeds on record being able to achieve 5GHz out of the box!

It’s looking like the biggest feature of the i9-9900KS will be the improved clock speed out of the box and multithreading capabilities. However, the fact that this chip is mainly an updated version of the i9-9900K may put some people off.

There hasn’t been a price tag put on this CPU yet, although Intel recently dropped the prices of its i9-9900K to compete with AMD to around roughly £400. With the new chip being an upgrade to the i9-9900k, it looks like we can expect the price to be around £400-500. Don’t quote us on that though as it’s all purely speculation at this point!