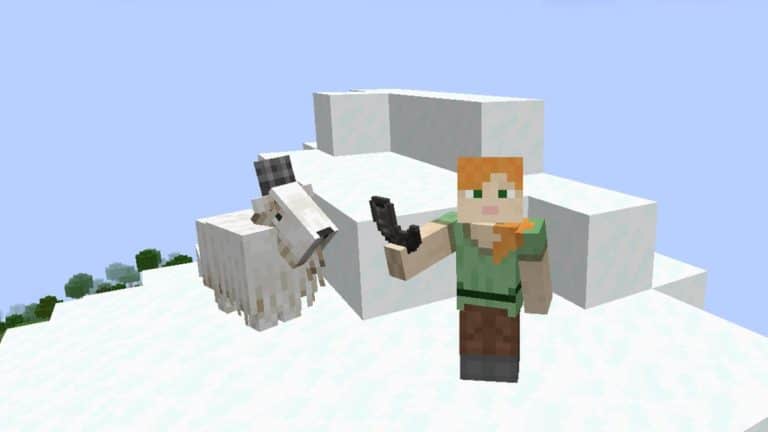 This week’s Minecraft snapshot is here as we get ever closer to the release of The Wild Update this Summer. In Minecraft snapshot 22w17a, we finally get Goat Horns – a new mob drop that’s been long in the making… and a few updates to The Warden and The Allay.

The main change in this week’s Minecraft snapshot is the addition of the Goat Horn. Goat Horns don’t drop if you kill a Goat, instead dropping when a Goat rams into a solid block, such as trees, Stone or Ores. They can also sometimes be looted from Pillager Outpost chests – so don’t forget to take a look when you go to free some Allays.

Goat Horns can be used by the player to make a loud, long-ranged sound, similar to that played during a Pillager Raid. There are 8 different variants of the Goat Horn, each with their own unique sound. Four of them can only be dropped by Screaming Goats. Jump into snapshot 22w17a to give them all a try.

Changes to The Warden

A few tweaks have been made to The Warden’s new, terrifying Ranged Attack. The attack will now bypass Shields and Armor, which we’re assuming is a bug fix as this should have presumably always been the case.

In a final change to The Warden this week, it now drops an item upon death! Previously, the Warden didn’t drop anything except a few Exp Orbs, since the goal is not to kill The Warden, but rather to evade it. While this is still the case, if you (or an external cause) does manage to take down the Deep Dark beast, it will now drop a single Sculk Catalyst upon death.

Changes to The Allay

Finally for the main updates in Minecraft snapshot 22w17a, there have been a couple of changes to the Allays’ behaviour. This includes a bug fix whereby the sound of an Allay connecting with a Note Block was not able to be blocked by Wool. This has now been fixed to work again.

In related news, the visualization relating to an Allay connecting with a Note Block has been modified with a more obvious vibration particle. Both of these changes are linked to the new importance of sound and vibrations coming with the Sculk Blocks and the Deep Dark.

For a full list of this week’s changes and a few bug fixes that have been made in snapshot 22w17a, check out the official Minecraft changelog. If you aren’t sure how to test out a snapshot in Minecraft, we have a guide on how to do just that.

It’s great to finally have a use for the goat (other than looking cute and jumping around), and the other few subtler changes suggest we could be getting closer to the next phase of the update! Fingers crossed!