This Decade In Gaming: PlayStation, Xbox, Nintendo, And PC Gaming 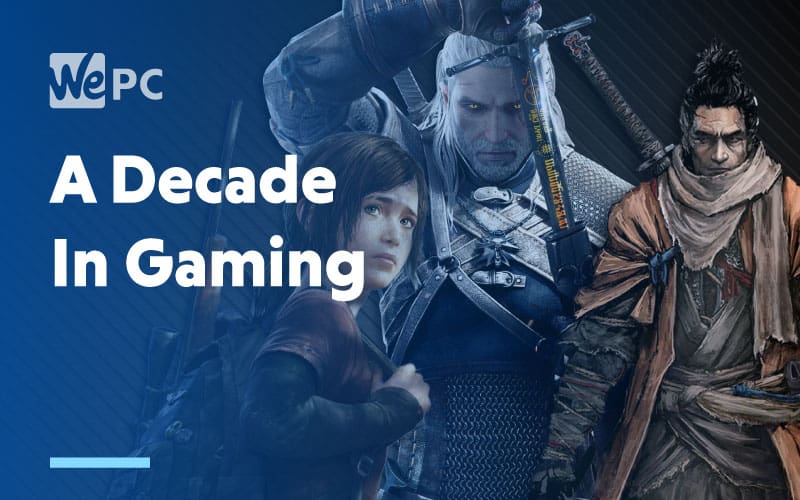 The last ten years in gaming have been a whirlwind of new technology, innovative game design, and just all-round awesomeness. We’ve had a slew of new consoles, seen PC gaming go from strength to strength, and seen VR gaming take center stage. As we close in on the end of 2019, and the ’10s, we look back at all the innovations that have changed the last decade in gaming.

In 2013, we got our hands on the next-gen Sony console, the PS4. With this console, they managed to overtake the Xbox and shoot to the top of the console gaming market. Games like Bloodborne, Uncharted 4: A Thief’s End, and the recently released Death Stranding all being PlayStation-exclusives really helped them to bring in more players.

Unlike Xbox, Sony also introduced their own VR system in the form of PSVR.

When the decade began, we were still enjoying the heydey of the Xbox 360. Now, we’ve enjoyed the Xbox One for (four) years and have been given our first glimpse of the Xbox Series X next-gen console. So, what has changed for Xbox over the last ten years?

2010 saw Xbox introduce their Xbox Kinect controllers that allowed users to play games that tracked their own motions through a specialized camera setup. While this didn’t take off in mainstream gaming, the dedicated Kinect games were a staple at my family Christmas parties for a good few years.

The Xbox One struggled to fight back against the surge of the PS4 and landed themselves firmly in second place in the console wars. But, that didn’t mean they took a backseat. They continued to innovate and bring us some amazing Xbox-exclusive titles in the form of their Halo series, as well as building a console capable of native 4K gaming.

As we head into 2020, we’re all awaiting the release of the newly announced Xbox Series X – the next-gen games console from Microsoft. Bringing us ray-tracing capabilities for some of the biggest upcoming releases, and some exciting-looking games heading over to the console, we’re excited to see what next year, and next decade brings for them.

Xbox One S 1TB Console - Gears 5 Bundle
Escape: Outrun the Bomb, outsmart the Swarm, Escape the hive; Versus: 11 game modes, new maps and rewards for everyone

With the Nintendo Wii already beginning to gather dust in people’s homes, Nintendo turned its attention back to what it does best this decade – handheld gaming. With the Nintendo DS already the most popular handheld console, the introduction of the 3DS added extra features to the already well-loved console.

Then came the Wii U, Nintendo’s first attempt to make a system that was as much a standard console as it was a handheld. Although, this wasn’t exactly what you’d call a success. But, they learned from their mistakes, and that’s what brought us the Nintendo Switch.

Being able to switch between a console you plug into your TV, and one you can play on your commute helped Nintendo to rebuild their console gaming empire. And their long list of exclusive Nintendo titles really helped to cement their position as a real contender in the console wars.

The recent release of the Nintendo Switch Lite also offered consumers a more portable and more affordable version of their classic Switch console.

When we think of the last decade of PC gaming, one particular topic springs to mind – that’s right, the great battle for processing supremacy between Intel and AMD. It’s a bout that’s been bubbling over since the start of desktop computing and one that continues to dominate headlines to this very day.

For the longest time, people would lean towards Intel thanks to their dominating figures in both performance and temperature. Having said that, Intel was stuck in a 4 core universe when it came to their mainstream desktop CPUs for the best part of 10 years. Something AMD wasn’t so keen to do in their own CPU design.

It took a while, but eventually, AMD shifted the old 4 core paradigm with the release of their Ryzen lineup of CPUs. At the front of that 1st gen line of Ryzen CPUs sat their impressive flagship 1800X processor – an 8-core/16-thread $500 powerhouse. This was AMD’s first huge leap forward in processing power for years and one that let Intel know AMD wasn’t here to play games (well, they were, but you get what I mean).

At this stage, Intel was still very much on top of the CPU ladder and they continued to step up their game by releasing powerful CPUs such as the 7700K, 8700k, and more recently the 9th gen Coffee Lake refresh CPU lineup.

Nearing the end of the decade, the trend continued to be in Intel’s favor as they dominated market sales and share percentage. However, that was all about to change with AMD’s release of their Ryzen 3rd Gen lineup.

AMD had been working on something special. Something that would finally knock Intel off the top spot for the first time in, well, since I can remember.

A plethora of incredibly powerful, well-priced CPUs came out of AMD’s Ryzen 3000 series lineup. They had been purpose-designed to go head-to-head with Intel in performance whilst undercutting their counterpart in price. AMD had designed a lineup of CPUs that actually competed with Intel’s for the first time in years.

We now sit in a time where the playing field is extremely level. The gap between Intel and AMD has been depleted massively and we now have a real choice on our hands when building a new PC. Intel probably still edge the gaming performance category, only just. Having said that, AMD absolutely dominates Intel when it comes to multi-core processes and desktop tasks. The only question left to ask ourselves, is what is Intel going to do to try and re-assert themselves at the top of the CPU ladder? Only time will tell.

The last ten years have seen some serious leaps when it comes to virtual reality. Gone are the days when jumping in a rollercoaster simulator at a theme park is the height of the technology. Now, most of us have some kind of VR system in our own homes.

We already mentioned the Nintendo Wii, but this was one of our first major forays into the world of adjusted-reality gaming. The controllers were precursors for the same motion sensors we use in VR gaming today.

Skip forward a few years, and we’re all obsessed with catching animated monsters in parks across the country with the launch of Pokemon Go. Mobile VR headsets begin to gain popularity as you can simply click in your smartphone and you’re good to go. And, Sony released its own PSVR system alongside companies like HTC and Occulus.

As we stumble into the next decade, we’re beginning to see even more advances in this area with a number of haptic technology products set to showcase at CES 2020 taking us one step closer to the VR utopia of Ready Player One.

Games That Changed The Decade

Don’t get me wrong, there have been a vast number of amazing hack and slash games released this decade that are the perfect remedy to a stressful day at work. But, story-driven titles have seen a sort of “golden age” in the last ten years as well.

Games like Life Is Strange, Disco Elysium, and practically anything by TellTale Games (Game of Thrones,  Batman: Shadows Edition, and The Wolf Among Us) took players on a narrative-driven journey where the story took center stage over combat.

It’s no secret that esports has seen incredible growth over the last ten years. Games like League of Legends, DOTA 2, and Overwatch helped to propel the sport into the spotlight and tournaments are now drawing in some seriously impressive crowds and prizes. This has also meant that more gaming companies have been appearing, giving gamers a wider choice when it comes to peripherals like monitors, keyboards, and gaming chairs.

While open-world games weren’t new when the decade began, they’ve become hugely popular and much more complex than ever before. Titles like GTA V, The Witcher 3, Skyrim, and The Legend of Zelda: Breath Of The Wild have allowed us to explore gaming in a way we never had before.

Now, more than ever, we have control over how we want to experience our favorite games. I remember playing Fable 3 for hours when all I did was practice my blacksmith skills and buy up properties to get rich – ignoring the pressing main quest and instead choosing to take a calmer route. The vast amount of choices and places to explore have transformed games into something we can feel a real part of, instead of being jostled along a pre-determined route. This kind of agency in the way the story is told has also been reflected in the huge popularity of TTRPGs like Dungeons and Dragons as well.

Ten years ago, trying to develop your own game was reserved for only the most skilled developers. Now, thanks to advances in technology that make it easier than ever to produce original games, Indie titles have seen a surge in popularity. Titles like Papers, Please and Gone Home have changed the way we think about gaming and given players more choices and experiences in their gaming.

Accessibility for smaller game developers has also helped. Gone are the days when we have to trudge to the local game store and hope that our new favorite title is in stock. Thanks to the increase in internet usage and speed, the introduction of Xbox Live and the rising popularity of Steam – games from every size developer are now much more easy to get your hands on.

When the decade began, it was safe to say that it was still very much a white-male dominated world. But, ten years later, the landscape of gaming is changing. Sure, there’s still a long way to go, but diversity and representation when it comes to race, sexuality, and gender are definitely improving.

This year we saw an announcement from the studio that created Life is Strange that their next game, Tell Me Why will feature a transgender character at the center. Popular games like Overwatch now have a fairly equal balance of male and female characters to choose from. And the breakaway hit of this year, The Outer Worlds, includes a queer, asexual character as one of your main companions. The world of gaming is becoming more welcoming for more people – and that can only be a good thing.

Of course, we can’t discuss this positive without looking back at one of the darkest gaming moments of the decade – Gamergate. Gamergate saw a large number of internet users harassing (almost exclusively female) game developers and reporters. Claiming that political issues were invading their “gaming space”, people’s home addresses and phone numbers were released, and death and rape threats were issued.

While we shouldn’t hope to forget the toxicity of this incident, it helps us to compare just how far we’ve come in a short space of time, that representation, political undertones, and diversity are now at the forefront of the gaming world.