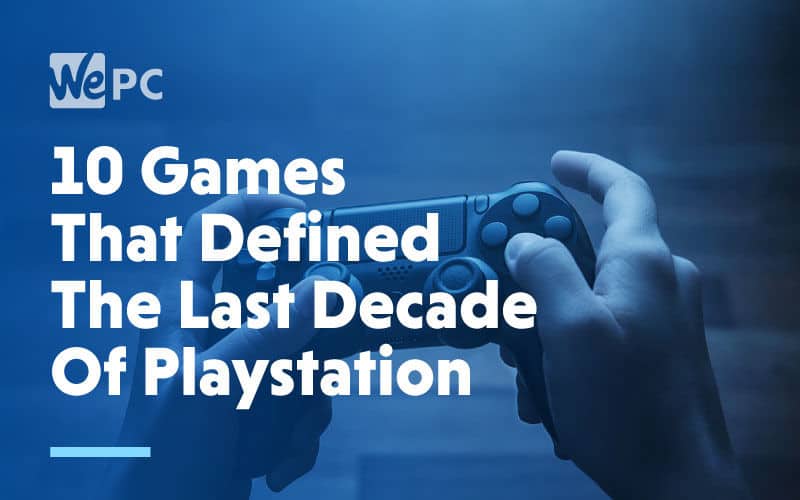 As the decade comes to a close, it’s time to take a look back at the PlayStation games that defined the past ten years. From open-world epics to action-adventure gems, Sony has truly hit it out of the park when it comes to securing smash hit exclusives for its platforms.

From Software’s delightfully challenging PlayStation 4 exclusive Bloodborne was, in many ways, the game that saw the prolific Japanese developer muster years of experience into arguably its best effort.

From dark themes on the nature of horror, greed, and death, Bloodborne weaves a narrative of Lovecraftian proportions that doesn’t hold the player’s hand, but simultaneously offers a world teeming with lore and subtleties.

With an exquisite level design that saw the map weave and meld into itself in almost poetic fashion, thrilling and sophisticated combat, varied and challenging boss fights,  and the uncanny ability to instill fear in even the most composed among us, Bloodborne is a shining beacon of everything video games can and should be.

Re-inventing a decade-old franchise and injecting it with new life is no small feat. Yet, that’s exactly what Santa Monica Studio achieved with 2018’s God of War.

An emotive tale of grief and the relationship between an estranged father and son, the action-adventure offers a stunning world oozing with Nordic mythology, gods, and landscapes.

Rather than flogging sheer brutality as its core mechanic, God of War injects its violence with gravitas, a purpose that is all but impossible to not respond to in an emotional sense. Throw in some clever environmental puzzles, a cast of endearing characters, and epic boss fights, and you get quickly one of the best games of the decade.

A 100 hours assault on the senses, Persona 5 is the Japanese RPG genre maturing into a kaleidoscopic deluge of sound, visuals, and quirks.

Quirky, unapologetic, and varied, Persona 5 walks a fine line between being a complex masterclass in role-playing and a wholly enticing package that anyone with a PlayStation 4 should jump into.

Prior to the release of Horizon Zero Dawn, developer Guerilla Games was known for its first-person shooter series Killzone. With that track record, few would have expected Horizon Zero Dawn to offer one of the most compelling open-world romps in recent memory.

Players are asked to journey a post-apocalyptic world ridden with mechanized dinos as the affable and skilled warrior Alloy. In a twist on the formula, we have here a world teeming with life. A world recovering from the excesses of humanity’s past where cities are draped in green and nature has been allowed to reclaim what is rightfully hers.

The past does rear its ugly head nestled in forgotten recesses of towering mountains and in the ever-present robotic crawl of the creatures, big and small, that trawl Horizon Zero Dawn’s vast and stunning world.

If there ever was a world to get lost in, then Horizon Zero Dawn is it and one that sets the benchmark for open-world games.

The Last of Us

By this point, there’s very little more that can be said about The Last of Us. Naughty Dog’s seminal title brought an almost cinematic level of writing to a duo of convincing and endearing characters in the form of unlikely pair Joel and Ellie.

Moments of intense violence give way to tenderness and palpable humanity. In a world beset by hordes of zombies where combat could have easily taken center stage, Joel’s task of escorting Ellie across a devastated America and the bond they establish makes the game a must-play.

As divisive as Hideo Kojima’s latest game Death Stranding is among the gaming community, few can fault its boundary-pushing ambitions. Death Stranding is part art-house folly, part over-indulgent walking simulator, but at its core is a yearning to extend our beloved medium beyond its often constrictive confines.

As Sam Porter, you traverse a devastated world where the living and the dead exist in a strange harmony where everything isn’t as it seems. The game is about a journey of preparation and patience where the enemy is the topography, the acid-like Timefall rain, and the slippery gloss of rocky outcrops.

Tasked with uniting disparate vestiges of human civilization scattered across mountain ranges, irradiated wastelands, and crumbling cities, Sam’s evolution from a gruff reluctant hero to enlightened savior is stacked with twists and turns, mad cerebral ponderings, and a crescendo that is both emotionally impactful and, at times, leaves the player incredulous.

Truly terrifying specter-like BTs stuck in limbo as they desperately try to cut their ties with the living world and crazed porters fueled by the desire to amass cargo sparingly pepper a mostly empty world.

Lofty, ambitious, flawed, and splendid all at once, Death Stranding is a game that every gamer should experience.

There’s a lot to be said for stripping back games, honing in on simplicity, and fine-tuning it. Journey does just that and in a spectacular game.

Journey explores the cliche adage of its being about the journey and not the destination in a nuanced fashion where exploration, discovery, and an absence of hand-holding leads to an almost spiritual experience. The fact it can easily be completed in one sitting makes it a complete experience that lingers long afterward in the player’s mind.

Despite nearing the tenth anniversary of release, Journey remains impervious to time and remains as relevant as it was when it burst to life back in 2012.

One of the most recognizable trends in gaming of the past ten years has been creating games that feel like cinematic experiences, and no game better embodies that than Naughty Dog’s Uncharted 4: A Thief’s End.

As an end to the franchise, it not only brought a fitting end to Nathan Drake’s adventures through excellent action sequences and visual delights, it brought a much needed human element to the series that was oft-critiqued for its gung-ho adventure tropes.

Shadow of the Colossus

While not strictly a game from the last decade, the excellent remake of Shadow of the Colossus brought Team Ico’s contemplative puzzle action-adventure to a modern audience.

Shadow of the Colossus epitomizes the idea of a video game as a piece of art on par with a painting or movie. Cerebral, haunting, and challenging, Shadow of the Colossus sees players take on monolithic titans in dozens of clever and varied ways that require patience and a hefty slice of cunning to find their weak points.

It’s an homage to the original and retains every facet that made it such a vital entry in the history of gaming.

Marvel’s Spider-Man is the game that converts non-super hero fans to the joys of Marvel’s action-packed comic world. The secret ingredient? The ability to careen through a perfectly modeled rendition of New York City as Spidey himself swinging from building to building at breakneck speed in effortless style.

From then on, you’re hooked, and as the game progresses, you add to Spider-Man’s arsenal of moves and weaponry to create awe-inspiring action sequences that not only feel incredible in the hands of the player but translate beautifully on-screen in what is one good looking game.

With an excellent and amusing story packed with the quips and bravado, you’d expect from the source material, and a mission variety many other similar games should take note of, Marvel’s Spider-Man is, put simply a really fun game.