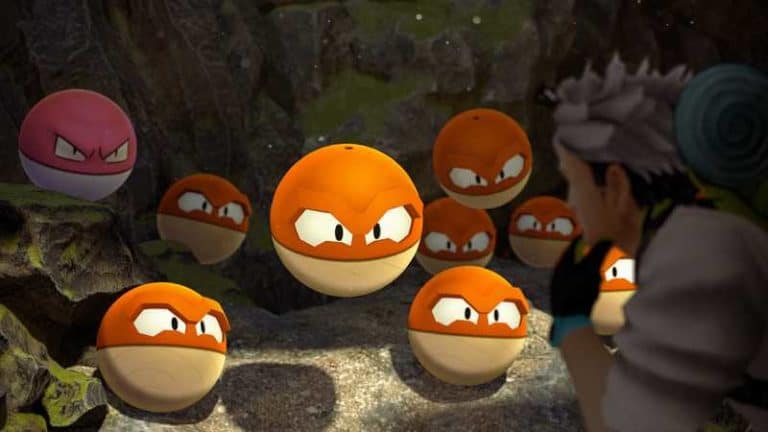 As part of the current Power Plant event taking place in Pokémon Go – with research focussing revolving around electric-type Pokémon – a new addition for your Go Pokedex has arrived. Yes, the first Hisuian Pokémon has been added to Pokémon Go in a crossover with Pokémon Legends Arceus – the friendly Grass and Electric-type Hisian Voltorb.

Who is Hisuian Voltorb?

Hisuian Voltorb is a brand-new Electric and Grass-type Pokémon added to Pokémon lore thanks to new game Pokémon Legends: Arceus. For those not yet in the know, the new game is based in the Hisui region, which was the Sinnoh region as it was known many, many years ago. Pokémon Legends: Arceus features an all-new dex with a mix of both old and new Pokémon, and Hisuian Pokémon – like Alolan and Galarian before them – are regional variants of existing Pokémon.

Voltorb, as we know it from the Kanto region, looks similar to a Poké Ball, with Trainers often mistaking it for one and being accidentally shocked. It’s Alpha Sapphire Pokedex entry even states, “it is rumored that it was first created when a Poké Ball was exposed to a powerful pulse of energy.” As such, Voltorb would not be able to be found in the Hisui region in its more modern form, as Poké Balls themselves have an altogether different appearance, having only recently been invented and are crafted by hand.

Instead, Hisuian Voltorb takes on the appearance of these original Poke Balls, with a bottom half that appears wooden, and a more orange top half than the Poke Balls we know so well. Most noticeably, though, is Hisuian Voltorb’s facial expression. Unlike the more angry-looking Kanto Voltorb with its furrowed brow, Hisuian Voltorb looks much more approachable. The Official Pokémon Company accompanied this Voltorb’s introductory Youtube Video with the description, “This Pokémon is always in high spirits and has a friendly personality.”

How to catch Hisuian Voltorb in Pokémon Go?

So, how do you catch one of these new, friendly Voltorbs in Pokémon Go? At the moment, it’s pretty simple, as they are appearing frequently in the wild, alongside their original counterparts. The electric-type Pokémon will only be appearing this frequently for the remainder of the Power Plant event, which ends on February 1st, 2022 and 10am local time, so make the most of them while they’re here. While they will remain in Pokémon Go after this point, they won’t be as easy to come by.

As well as seeing many Hisuian Voltorb in the wild, you’ll also have the chance to catch yourself one of these interesting new Pokémon as part of new Special Research: Voltorb from the Hisui Region?!.

Voltorb from the Hisui Region?! Part 1

Voltorb from the Hisui Region?! Part 2

Can Hisuian Voltorb be shiny in Pokémon Go?

According to the original Pokémon Go blog entry, Hisuian Voltorb cannot currently be shiny in Pokémon Go. It is unusual for new Pokémon to be shiny as soon as they are released, so we’ll likely have to wait a while before Hisuian Voltorb’s shiny form is available in the mobile game. Having said that, you can try and catch yourself a shiny (non-Hisuian) Voltorb. As they, too, are also appearing more frequently in the wild for the remainder of the Power Plant event, you will have a slightly increased chance of finding it’s shiny variant, which can also be evolved into an Electrode.

Can you evolve Hisuian Voltorb in Pokémon Go?

Check out our separate guide to evolving Hisuian Voltorb to find out!