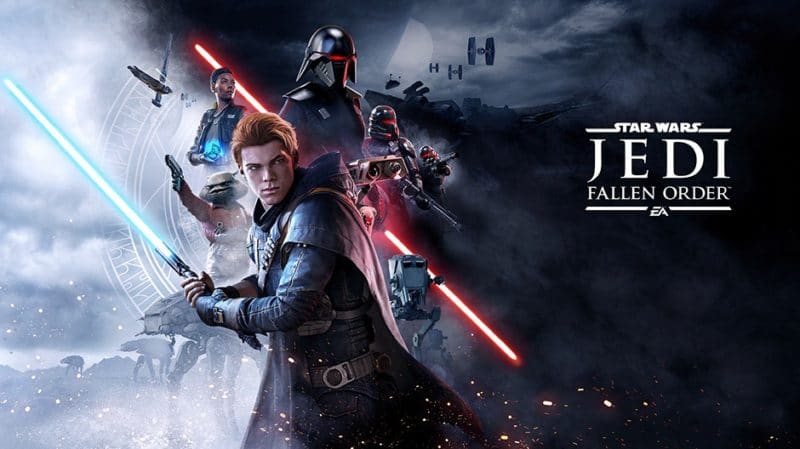 EA Play at E3 2019 sprung to life with hotly anticipated Star Wars Jedi: Fallen Order and although we knew it was coming, the first look at 15 minutes of uncut alpha gameplay footage was a sight to behold and bodes well for the full release.

The gameplay takes place approximately three hours into the game on Wookie planet Kashyyyk. The Empire has enslaved the dwelling Wookies and is bleeding the planet dry of all its resources. Protagonist Cal Kestis – in a transitory state between a padawan and a fully-fledged Jedi – is on a mission to bring the Jedi order back from the dead.

The footage starts with panning views of a swampy ravine with drooping foliage. Cal is shadowed by a small droid, BD-1, that sits on his back. Beyond being a neat way to bring up the map, locate objectives, learn about the environment, and open doors, the droid provides limited health boosts.

Cal advances using a mixture of wall running, grappling, and vine jumping traversal mechanics before linking up with a small crew of rebels as they plan an assault of an Empire refinery.

The first taste of combat is heavily focused on deflecting and blocking blaster shots while using the force to finish off stormtroopers. A slowing and a lightsaber throwing skills crops up as do a selection of finishing moves that involve drawing enemies close before using Cal’s lightsaber to impale them.

Cal moves forward and encounters a unit of melee troopers which he dispatches via carefully timed parries followed by more finishing moves that are reminiscent of a FromSoftware title, most notably the recent Sekiro: Shadows Die Twice, going so far as to use similar red dots on targeted enemies. Making his way into the facility, Cal uses the force to push through doors and create pathways.

Next, we meet an elite trooper armed with a staff. Once again, parrying plays a huge role as does dodging and timed attacks alongside using the force. A pair of giant spiders with web and jumping attacks join the fray and pose a markedly harder obstacle than the troopers. We see the “sense echo” skill in action, which allows Cal to clock into what appear to be the final moments of a stormtrooper’s life. Doing so draws out another, feistier arachnid.

Cal delves further into the bowels of the refinery encountering more enemies and using an ability that freezes blasters fire, allowing him to move an enemy into its path using the force. The demo draws to a close with a tantalizing look at a towering imperial security droid lurching at Cal.

Overall, Star Wars Jedi: Fallen Order is lining itself up as a mature title that draws from the darker tone of the more recent Star Wars movies. The similarities with FromSoftware in the combat is evident, as are those of the traversal found in titles like Titanfall, which is no bad thing.