Home » Gaming » Who are the Danganronpa 2 characters?

Who are the Danganronpa 2 characters? 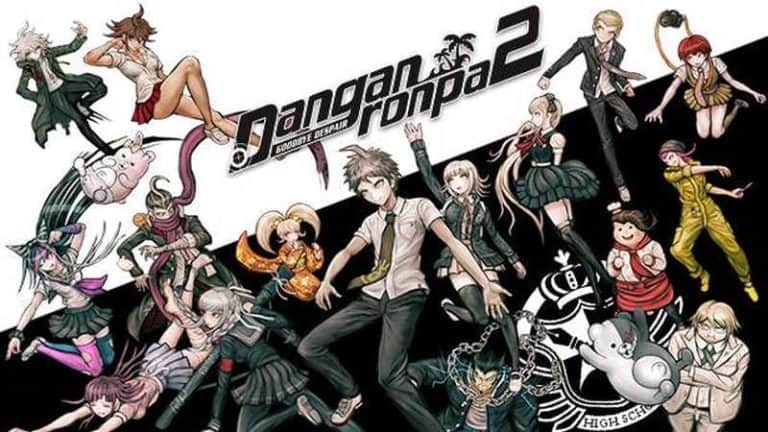 Danganronpa 2 is the second installment in the Danganronpa franchise created by Kazutaka Kodaka and Spike Chunsoft. It follows another group of students as they are forced into a ‘killing game’ by the sinister Monokuma after being abandoned on a school field trip. With such a large cast, it can be hard to keep track of who’s who, so we’ve made this online list of the Danganronpa 2 characters and who they are to help you out.

This article will explain who the characters are, but we’ll try to avoid revealing twists and won’t spoil any character deaths. This should hopefully preserve some of the suspense and mystery should you still want to play Danganronpa 2 after reading this.

A confrontational girl that grew up in a rough area. She’s an amazing gymnast, though she generally struggles with other school subjects.

Alter Ego is a heroic artificial intelligence built by Chihiro. He returns from Danganronpa to help the students on the Jabberwock Island survive. He primarily appears inside of the Neo World Program, as he has become it’s master software.

A relaxed young girl that is amazing at video games. She seems a bit naive and unaware of how the real world works. Chiaki becomes fast friends with Hajime Hinata, helping him solve mysteries during his trials. She considers Chihiro Fujisaki (from the original Danganronpa) to be a part of her family.

Kuzuryu has a baby face and is insecure enough about it to threaten to hurt people that point it out. He starts out full of anger, but mellows out as he starts to care about the rest of the surviving students. When Fuyuhiko gets older, he will take charge of the largest Yakuza family in Japan due to his familial ties to important members.

Gundham is a mysterious student that is surprisingly good at taming animals. He is a very dramatic person that takes animal welfare extremely seriously. Gundham has four pet hamsters with him at all times, which he has nicknamed the Four Dark Devas of Destruction.

Hajime is the main character and person that solves the mysteries in Danganronpa 2. He has amnesia and may in fact be the result of a dark experiment. In his past, he was somehow involved in “The Tragedy”, a mass-murder that changed the direction of human society for the worse.

Hiyoko is a popular dancer, known for her mastery of the traditional nihon-buyō style. She can be selfish and cheeky, often saying harsh things to the rest of the students. Throughout the story of Danganronpa 2, Hiyoko becomes good friends with Mahiru Koizumi.

Ibuki plays the guitar for an all-girl rock band. She’s going through an experimental change in performance style, but sadly most people don’t like her new screamo-style music upon their first listen.

Kazuichi is a genius mechanic for his age. He’s also very over-the-top and flashy, because he is often overcompensating for the fact he used to be bullied at his old school. He has a crush on Sonia, but it is not reciprocated by her.

Mahiru is a photographer. She’s a very firm person, knowing what she believes and acting with common sense whenever she can.

Previously the lead protagonist, this time Makoto is just a part of the story, rather than the focus of it. In the time since the original Danganronpa, Naegi has been experimenting with creating virtual worlds that could be used to rehabilitate troubled teenagers.

Mikan studies nursing. She was abused as a young child, which has led to her having confidence issues that have followed her into later in life. People intimidate her and confrontation often makes her cry. She can be clumsy, often finding herself falling on to the floor and getting discovered in ridiculous positions by other people at the worst possible times.

The evil white-and-black bear returns from Danganronpa. It seems like this time, he may be under the control of a malicious artificial intelligence. No one knows what his motives are, providing a mystery that must be solved if the students want to survive.

At first Nagito seems a lot like Makoto Naegi, with a similarly strange relationship with luck. As the story progresses he reveals that he is a very subservient young man, believing himself inferior to the others at the school because he got accepted because of a placement lottery. Nagito will sometimes call himself “a stepping stone for hope”. What a strange young man.

Fuyuhiko Kuzuryu’s younger sister. She had her head smashed in before the field trip story even began, but no one knows who did it. Or no one will admit that they know, anyway…

Nekomaru is a dependable student that likes to show support for the school’s athletes. Nidai has bad stomach and intestinal issues, which stop him from taking part in any sports himself. He gets close with Akane Owari as the story progresses.

Peko shows very few emotions and always carries a kendo sword on her person. She is the servant and friend of the Kuzuryu family, secretly loving them and firmly believing that it is her duty to protect them.

Sato is friends with Mahiru Koizumi, Mikan Tsumiki, Hiyoko Saionji and Ibuki Mioda. She’s not in the game much, so we don’t really know anything about her. She doesn’t even get a full name!

Sonia is an exchange student from Europe. She’s actually the princess of the small (fictional) kingdom, Novoselic. While Sonia is typically graceful and acts in a composed manner, she has a bad habit of swearing in her native European tongue when things get stressful. Her country imports a lot of media, so she has a bit of an obsession with Japanese culture. She also enjoys the warped minds of serial killers from horror films.

Teruteru is a mixed bag of a person. He’s an amazing cook, but he’s also a pervert that makes inappropriate comments to men and women alike. He tries to act like he’s from the city, but he’s actually from a rural area and wants to save his mother’s failing restaurant.

No one knows who the Ultimate Imposter is. They never show their true identity and often appear disguised as another one of the students. Their ability to quickly change from one to the other means they may even somehow be superhuman. The Ultimate Imposter seems to struggle with the nature of the way they live, but appreciates being acknowledged by their peers all the same. Imposter seems like a good person and will often perform quiet acts of kindness that help others without receiving anything in return.

Magical Girl Miracle Usami is an odd pink rabbit that seems determined to do whatever she can to protect the students. Usami claims she is a teacher and has magical powers that can kill monsters and seemingly manipulate reality itself. Although Monokuma messes with her and turns her into a grey rabbit servant called Monomi, she keeps trying to help whenever she has the opportunity. Her cute catchphrase is “love, love!”.

Danganronpa is a series with several games. We reckon that if you liked reading this that you’ll probably want to play it. The best ways to play Danganronpa at the moment are on Steam or on the Nintendo Switch, where there’s a trilogy collection.

Want to learn more about Danganronpa? Then why not check out our entries on the rest of the series?