Sling spells and control the shadows with our Mage Class Guide 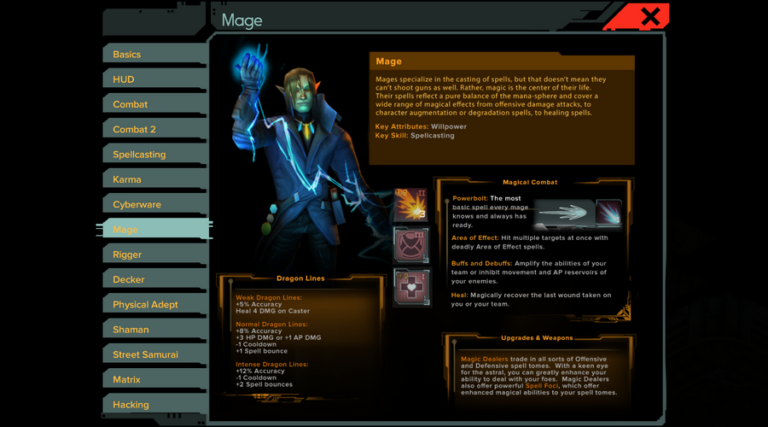 Being a runner in The Shadowrun Trilogy often means packing impressive hardware. Guns and grenades sit right alongside blades and combat drones. But the world of Shadowrun isn’t simply Cyberpunk; Fantasy plays an equal part. Spells are cast left and right. You’re as likely to be caught in a fireball as you are in a firefight. If the more magical side of the Sixth World appeals to you, then Mage should be your runner’s chosen class.

We’re here to help you build the best Mage possible with our Shadowrun Trilogy class guide.

Few classes in The Shadowrun Trilogy offer as much variety as the Mage. Most other classes rely on weaponry to be an effective combatant, and this often locks them into just one or two main methods of dealing with foes. Mages, on the other hand, have a variety of solutions to tackle any given problem, limited only by the Nuyen cost of the spells they sling.

Offensive Mage spells are predominantly explosive and elemental. Gouts of flame, lightning bolts, and destructive areas-of-effect are the norm. Beyond that, Mages have the power to heal, improve allies’ aim, grant or destroy armor, and reduce foes’ action economy by damaging their AP.

Mage Spellbook slots increase as you spend points in the Wisdom stat, and as such you’ll carry around a fully-stocked arsenal before long. Mages’ offensive capabilities are impressive but don’t forget to round out your spell selection with buffing and debuffing options to reach your runner’s full potential.

When considering how to build your runner in The Shadowrun Trilogy, it’s worth considering the overall availability of Karma (experience points) in each game.

Shadowrun Returns is the most generous game in the series with the Karma points it grants you. You have the flexibility to be extremely competent in your chosen area, whilst also being able to experiment with other skills and disciplines fairly freely.

Shadowrun Dragonfall and Shadowrun Hong Kong on the other hand are less lenient with their Karma. It is best to either specialize in a couple of class areas or accept that spreading your points over many skills may lead to you being less effective in those skills. You can still be an extremely effective Mage, but taking on multiple casting disciplines means you’re less likely to progress those individual skills as far as in Shadowrun Returns.

Body is the stat that governs health. Health is useful no matter your class. You’ll want to invest a few points in this as a Mage, but not as many as for classes like Street Samurai and Adept that thrive in close quarters.

Cyberware Affinity is also a subsection of Body, and points invested here are not as wasted as you might initially think. Installing Cyberware in your Runner subtracts from your Essence score. Having less Essence negatively impacts casting characters in a number of ways. Installing too much Cyberware (outside of rare Bioware equipment that does not cost Essence to install) in your Mage is a sure-fire way to sabotage your character’s combat effectiveness.

However, at certain stages of Cyberware Affinity, you are afforded extra Essence points. This allows you to install a small amount of Cyberware in your Mage without weakening their magical capabilities.

Dump it. Strength is used primarily for close-combat abilities, and no self-respecting mage has any business dashing up to the front lines. Strength also increases the range of your grenades, but Mage runners have plenty of other options for making things explode.

Quickness is still primarily a physical stat, but one that has many more applications for a mage than Strength does. Your ranged combat abilities and overall proficiency with firearms rely on Quickness. Even if your Spellbook is full to bursting with powerful magical options, it doesn’t hurt to bring a sidearm along on a run.

The Dodge skill also depends on Quickness, which is fairly crucial for a Mage runner. Dodge reduces the likelihood of being hit by enemy attacks. A higher Dodge skill means that enemies are less likely to target you than your allies with lower Dodge scores. Definitely put some points into Quickness and Dodge, unless you’re confident in your other means of mitigating damage.

The core stat for a Mage runner. Regardless of whether you choose to hit the cap or not, the majority of your Karma spending as a Mage will be in Wisdom. This Stat governs your spellcasting – both the number of spells you can equip at once and the likelihood of your spells hitting the target. Higher Wisdom also makes you more resistant to enemy spellcasting, providing a defensive boost alongside the offensive properties of your spells.

The only real reason to put anything into Intelligence as a Mage is the Biotech skill, which increases the amount of healing received from Medkits. But Mages also have access to spells that can heal the damage received from a target’s most recent attack, rendering Medkits less necessary than otherwise. A few points in Biotech are a wise investment on harder difficulties, but otherwise, feel free to ignore Intelligence.

Charisma is the stat that has perhaps the most active applications outside of the skills it boosts. Checks using Charisma are plentiful in the Shadowrun Trilogy, granting you the opportunity to talk your way out of danger or into a lucrative situation.

Boosting Charisma also unlocks Etiquettes, which can be used to further ingratiate your runner with different groups of people throughout The Shadowrun Trilogy. Thankfully, Etiquettes don’t require Karma points. You unlock them automatically at every two ranks of Charisma.

Outside of Etiquettes, there are precious few reasons to invest heavily in Charisma, unless you are attempting to play as a hybrid spellcaster. Shaman spells utilize Charisma instead of Wisdom, as does Spirit Summoning. It is possible to put some points into Charisma and broaden your spellcasting repertoire, but it’s best to use Shaman spells to supplement your Mage spellcasting as opposed to a true 50/50 split. Trying to have the best of both worlds will likely end with your character being mediocre in both forms of spellcasting.

If you can afford to buy three levels of the Spirit Summoning skill, you’ll unlock a Spirit Totem for your runner. Spirit totems have a variety of useful benefits regardless of your overall class focus. As such, it’s worth considering if you’ve already spent points in Charisma to unlock Etiquettes.

That’s it for our Shadowrun Trilogy Mage Class guide. Now get out there, harness the arcane and earn your keep, Runner!