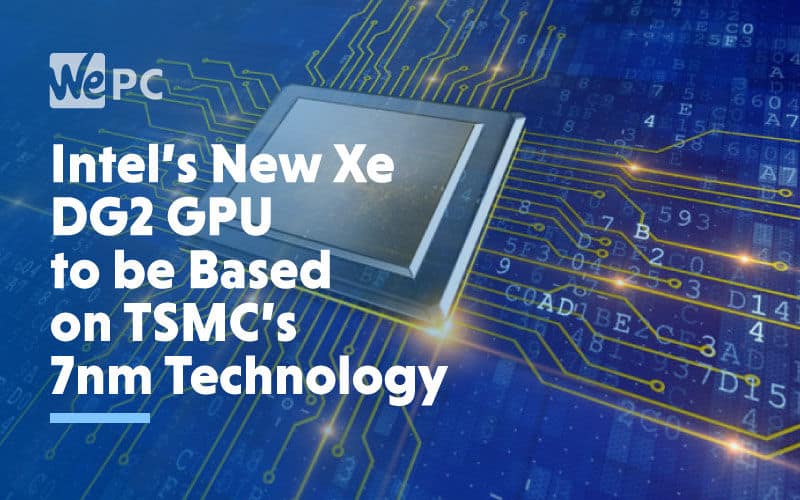 It looks like Intel is gearing up to produce its next generation of Xe graphics cards with architecture based on TSMC’s 7nm process node.

We’ve already seen a little preview of Intel’s Xe Low Power DG1 GPU and the Xe HPC Ponte Vecchio GPU. Now it’s time to see a high-performance GPU in the lineup. This will also be known as the DG2.

According to a rumor from AdoredTV, they have information that suggests Intel will be launching the DG2 GPU at some point in 2022 and that it would be based on the 7nm process node from TSMC.

It’s interesting that Intel is opting for using TSMC’s process node rather than their own, given their own work 7nm technology. However, AdoredTV says they believe that Intel won’t be using TSMC for all their Xe high-performance graphics cards, just the DG2 models.

Why Is Intel Using TSMC At All?

With Intel’s work in 7nm technology, it seems strange that they would opt for TSMC.

As Intel appears to be going for the 7nm, not the 7nm+ (which has EUV) it could be due to cost-effectiveness. If this is the case, it’s possible we could see some competitive pricing from Intel which can only be a good thing for buyers. It seems like this will be the only way to face off against AMD and Nvidia who are already leading the way ahead.

Of course, this is only a rumor so far and we have not heard anything official to confirm from Intel so it should be taken with a pinch of salt. However, if we hear any updates or confirmations in the meantime, we will be sure to keep you updated on all the news right here.