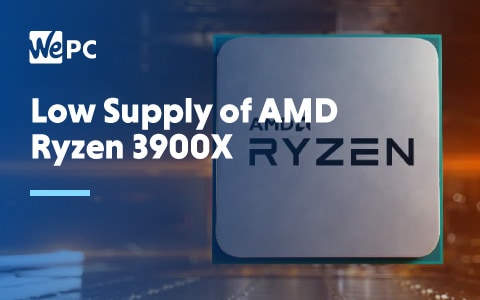 To say that getting your hands on one of AMD’s ultra-powerful Intel Core i9-9900K busting Ryzen 9 3900X is difficult is as close to an understatement as we can get. Securing AMD’s new 12-core CPU is like finding a needle in a haystack at the moment, and retailers are making the most of the drought to cash in by bumping up prices.

And that’s if it’s even available. In most cases, the chip has sold out, and listings have reverted to pre-orders only. Pricing varies greatly depending on where you look, but we’ve seen price tags nearly $300 higher than the recommended retail price of $499.

The worst offenders are Amazon with a wallet-busting $739.99 and third-party sellers on Newegg advertising a blistering $799.99 for the Ryzen 9 3900X.

As for when stocks will come in again, the picture is even murkier. Individual retailers have even gone so far as to state that the AMD Ryzen 9 3900X is no longer available online. Best Buy, for example, vaguely suggests it will receive new stock tomorrow.

The situation is identical across the pond where prices are naturally already higher than on US soil. We’ve spotted pricing around the £550 mark going up as high as nearly £800 via Amazon EU.

With AMD planning the release of the Ryzen 3950X right about now, it’s likely to be pushed back a few months at the very least as a consequence of the supply issues.

As for reasons behind the low stock levels, factors linked to the inherent difficulty on the manufacturing level of pumping out 12-cores and getting these passed stringent internal testing protocols have been mentioned.

Another swaying factor is an unprecedented demand for the CPU itself. With a purported 25% performance boost on Intel equivalent Core i9-9900K, builders are flocking to get their hands on the Ryzen 3900X.