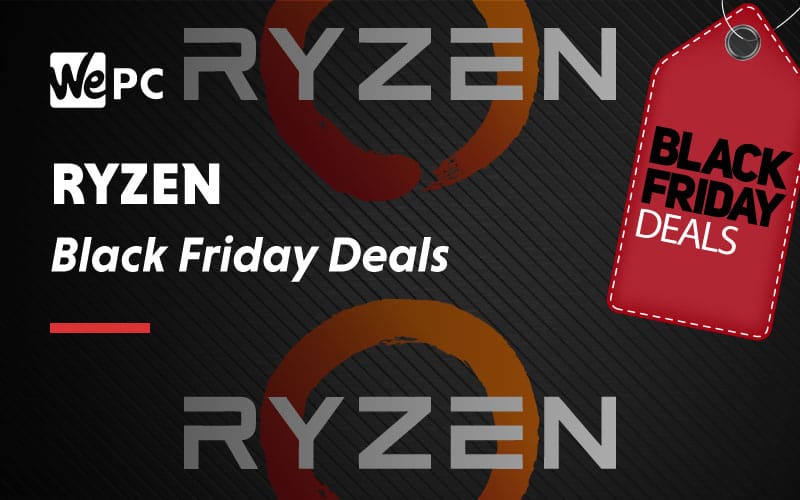 Whether you are into content creation or gaming, it is highly likely you will have heard of the all-new AMD Ryzen CPUs. AMD leaped ahead of the competition this year with the introduction of the incredibly powerful Ryzen 3000 processors. All of the Ryzen CPUs offer much more value than their Intel counterparts, and they are frequently recommended in our custom builds.

With the new Threadripper processors due for release, we will most likely see some discount on the previous generation of Threadrippers. The deals won't stop there, though, as they tend to offer discounts across their range every Black Friday, so let's take a closer look at the best Black Friday Ryzen deals in 2019.

It wasn't too long ago where Black Friday was literally on that very day, now though, it has become a public holiday and spans over a few weeks! We all love a discount, especially on expensive tech like a CPU, and we've got the low-down on what's coming this year.

To ease the process and get you to those Ryzen deals in quick fashion, we will be continuously updating this page to feature all the deals in one place.

Where To Find The Best Black Friday Ryzen Deals

Black Friday is a massive sales event, so naturally, a wide range of retailers jump on board to bring you the best deals possible. Finding the best deals can be irritating, I mean, who wants to spend all their time scrolling through marketplaces? With that in mind, we are going to be taking care of all your Black Friday needs, making WePC the place to be this Black Friday.

Amazon is the best place to start when Black Friday arrives, and you can bet they have some superb deals this 2019. Amazon will feature hundreds and possibly thousands of Black Friday deals. Discounts have already started to take place on some of the older generations of AMD processors!

Another great place to visit for Black Friday deals is Best Buy. Just like Amazon, they’ve already got some interesting deals live for Ryzen!

Just glancing through some of the retailer sites, we see some interesting Black Friday deals already being pushed out. While it's hard to say if the discounts are going to become more prevalent, there are already savings to be made!

With some of the best CPUs on the market, we are excited to see some impressive deals for the older gen processors and maybe some of the 3rd-gen.

With AMD's APUs featuring discounts last year, we know it is going to be the same this 2019 Black Friday.

With the release of the new Threadrippers on the horizon, it is highly likely we will see older-gen TW processors getting some heavy discounts too.

Taking a look at the deals we saw on Black Friday 2018; you can be sure to see several discounts from AMD Ryzen once again. Some of the Ryzen processors on discount last year reached up to $65 off!

Black Friday is the sales event that can make a huge impact on your new PC build. Many consider Black Friday to be a little bit chaotic, but the deals that are likely to come are sure to get you riled up! Are there any Ryzen CPU deals you are looking to take advantage of this Black Friday? Head over to the WePC community and let us know about the best Ryzen Black Friday deals you hope to see.