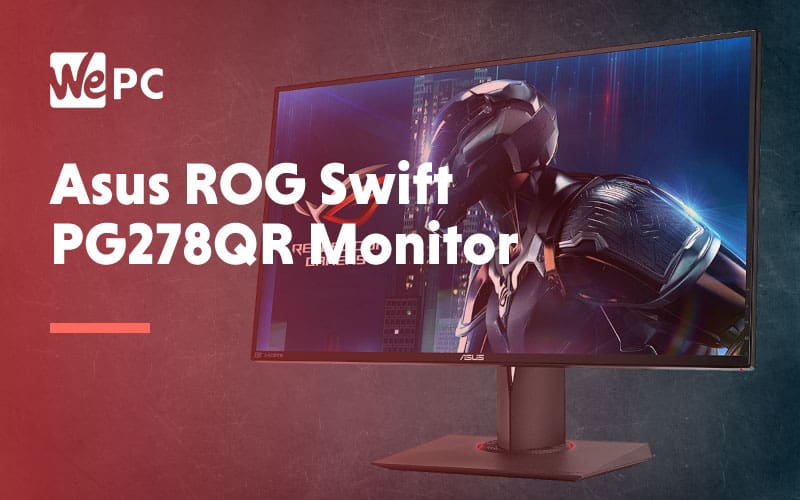 Since the team here at WePC love a bit of competitive gaming, we've had two of the Asus ROG Swift PG278QR monitors being used for months now. The review for these highly responsive gaming monitors has been long overdue, and with this monitor boasting a 1440p screen with an upgraded 165Hz refresh rate, I think its time we got started.

If you have the cash to splash and an Nvidia GPU, this sequel to a highly popular predecessor should tickle your fancy. The Asus PG278QR is packed with features such as Nvidia's G-Sync technology and one of the best adjustable stands available.

The Asus ROG Swift PG278QR is an update to the Swift PG278Q with the differences being the overclocking ability of the refresh rate and the inclusion of an HDMI port for greater flexibility.

Let's dive straight into the review and see how it compares to some of the best monitors currently available on the market and if it is worth your money. 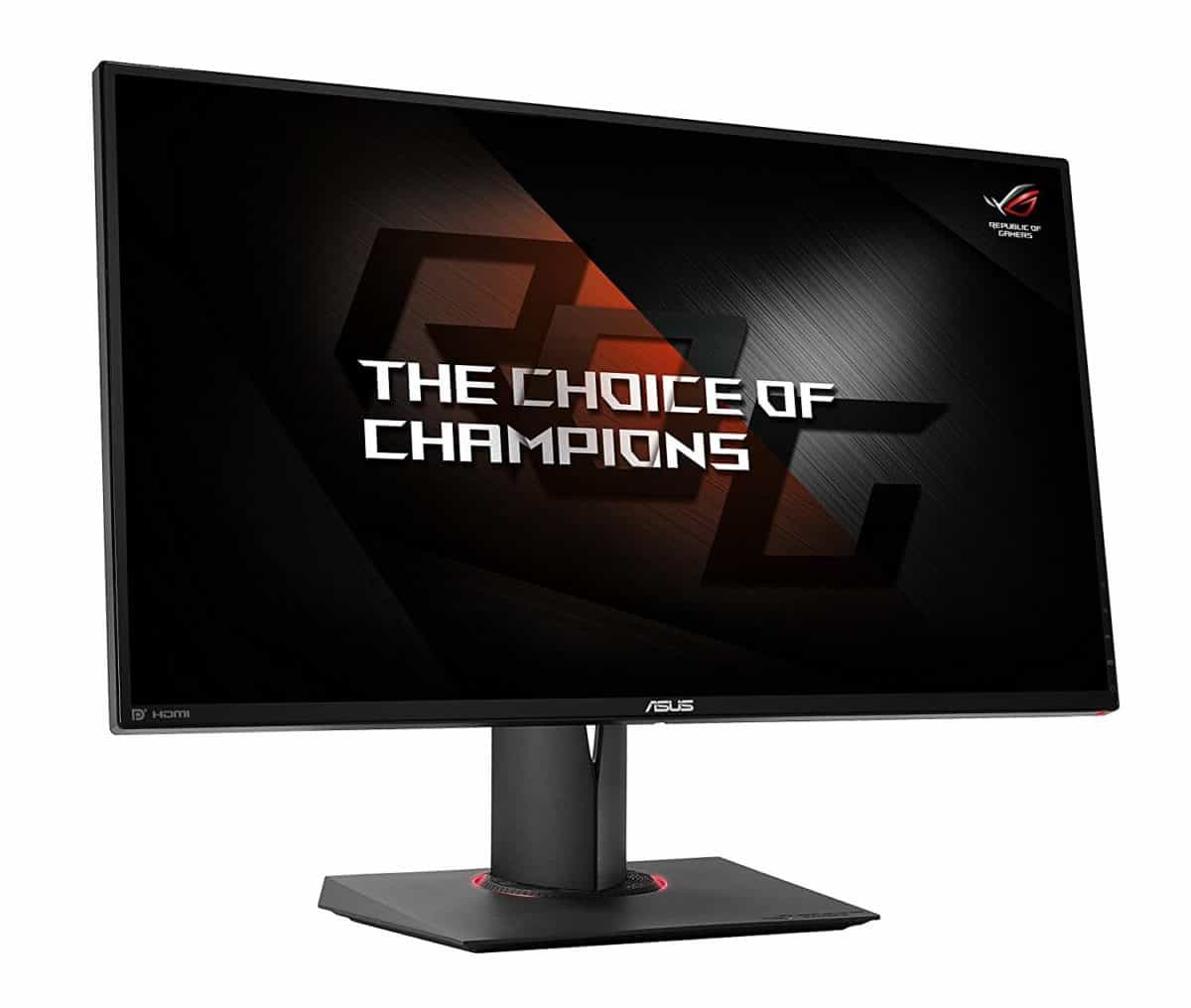 The Asus ROG Swift PG278QR is a top class gaming monitor and perfect for the competitive gamer. 165Hz refresh rate, 1ms response time and G-sync are just some of the features that will benefit your gaming experience from this monitor.

The PG278QR was purchased around three months ago and has been used extensively for work and gaming pretty much every day since. I'm not rocking the best build available with this, but this system is no slouch either. With an i5-8600 paired with an EVGA 1080 Ti, I have been able to put this monitor through its paces.

As this is a gaming monitor, it makes sense to test it across a wide variety of games (great excuse) and see if we can visibly see the advantages of a higher hertz refresh rate, G sync, and if there are any disadvantages to the TN panel. 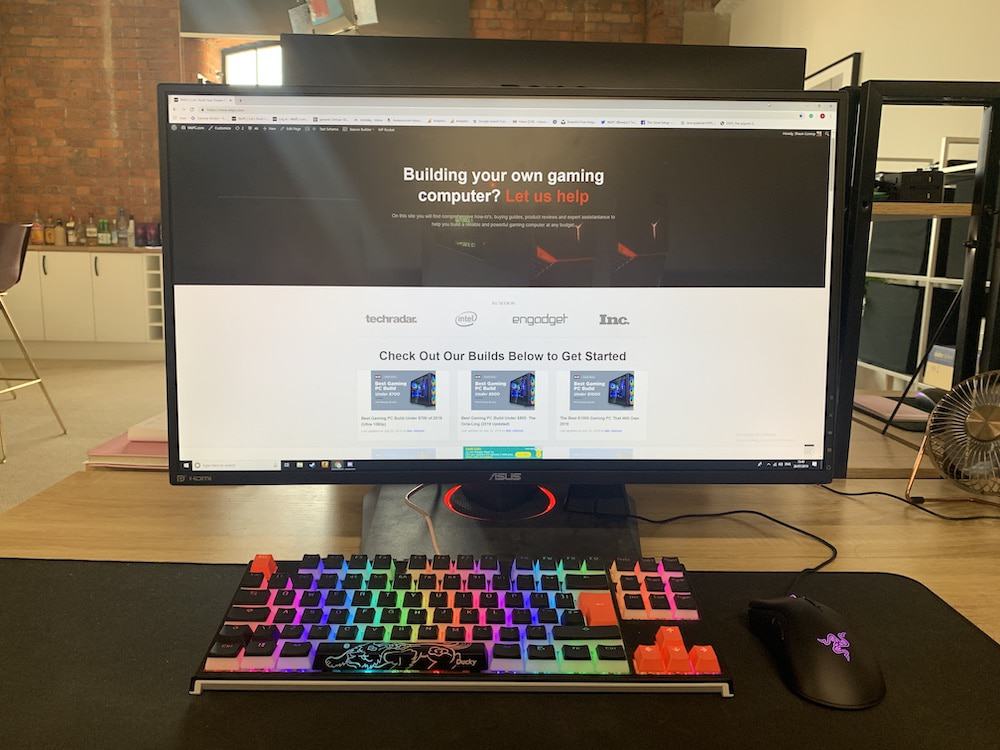 The hardware specifications are a great place to start when looking into buying a new monitor as it may often show features that you desire or tend to avoid.

From refresh rates to contrast ratio, you will be able to find out all the specs in this section.

Below are the specs for the PG278QR:

The stand is quite bulky, but the flipside is it supports the large 27" screen effectively. Just make sure you have a desk big enough for the monitor and peripherals with this one as it is definitely doesn't have a low profile.

For those who are unfamiliar with these terms, below is a brief description of each.

Response time refers to the amount of time it takes for the individual pixels to change color. The response time is measured in milliseconds (ms), and you want this number to always be under 5ms with the preference always going to be 1ms depending on your panel type. If the response time is too slow, you get what is known as 'ghosting' which can significantly reduce the quality of the image.

Refresh rate determines how fast your monitor will physically refresh the images displayed with the higher the number often resulting in a smoother user experience. For example, the PG278QR has a refresh rate of 144Hz out of the box so it will refresh the image 144 times a second.

This monitor can be overclocked to 165Hz, and if you pair this with a good computer, the G-Sync module will provide a buttery smooth winner.

The inputs on this monitor seem a little underwhelming for the price, and we would have liked to see USB Type-C featured, but this still has enough options for the modern gamer.

This monitor features 1 x DisplayPort 1.2 which will allow you to unlock the 165Hz refresh rate. Unlike the predecessor, you get 1 x HDMI 1.4 for greater flexibility. We see a 3.5mm audio jack input for your headphones and 2 x USB 3.0 ports too. 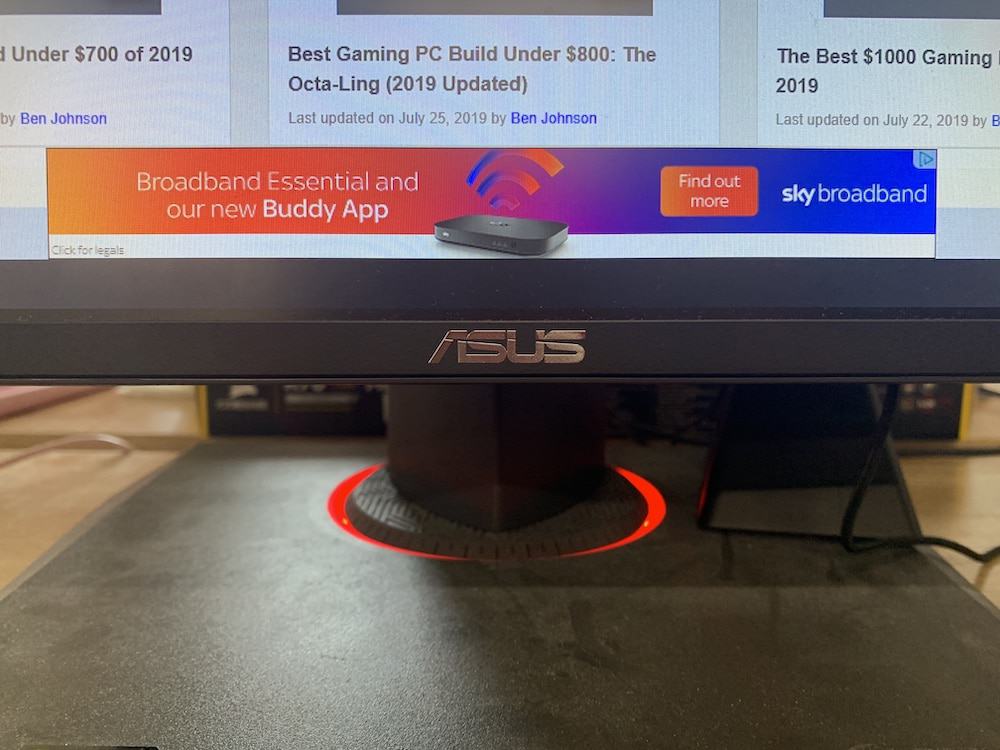 As far as gaming monitors go the Asus ROG Swift PG278QR is jam-packed with the features we want to see. Even if the TN panel lets this monitor down a little bit, the features certainly do not.

In terms of design, the PG278QR offers no physical differences from the older PG278Q apart from the odd update. The plastic material is a light matte black and is accented well by the small touches of red here and there (most notably the red LED base). We see a thin bezels feature on this monitor (6mm) which is a nice touch and leaves you with a more substantial feeling unobstructed view.

Moving around the back, we see air vents for rapid cooling cut at a slight angle. The OSD buttons also feature at the back and even they feel premium, including the little navigation joystick. We also see a slit cut out for cable management routing which I have become a fan of in monitors as it really helps tidy up the desk without the need for some cable tie rig. 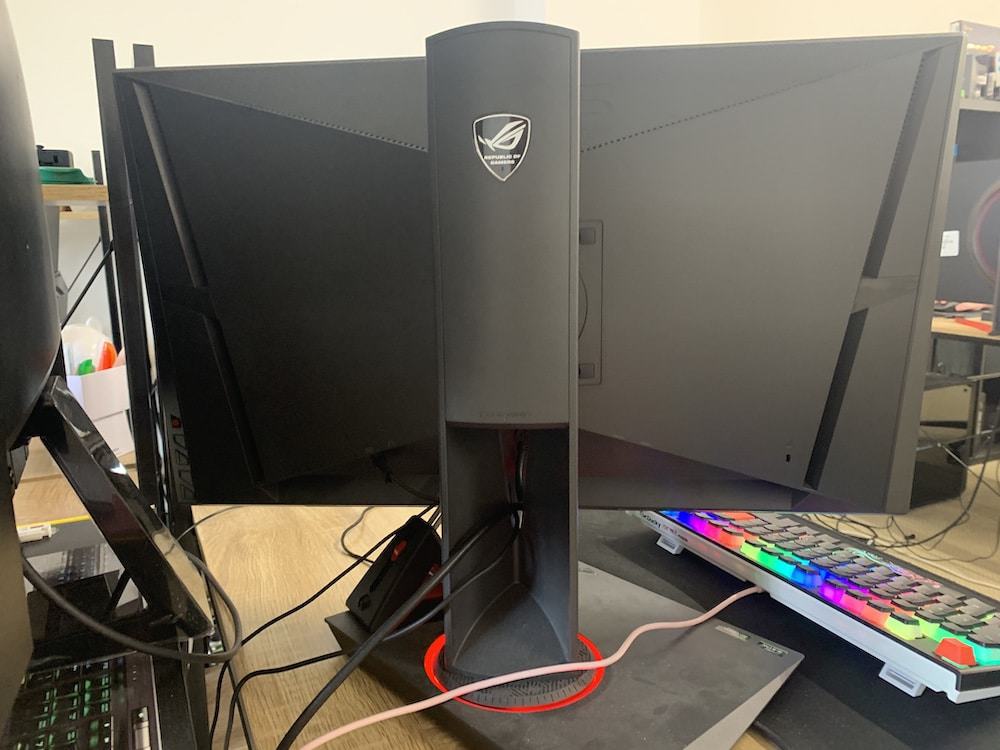 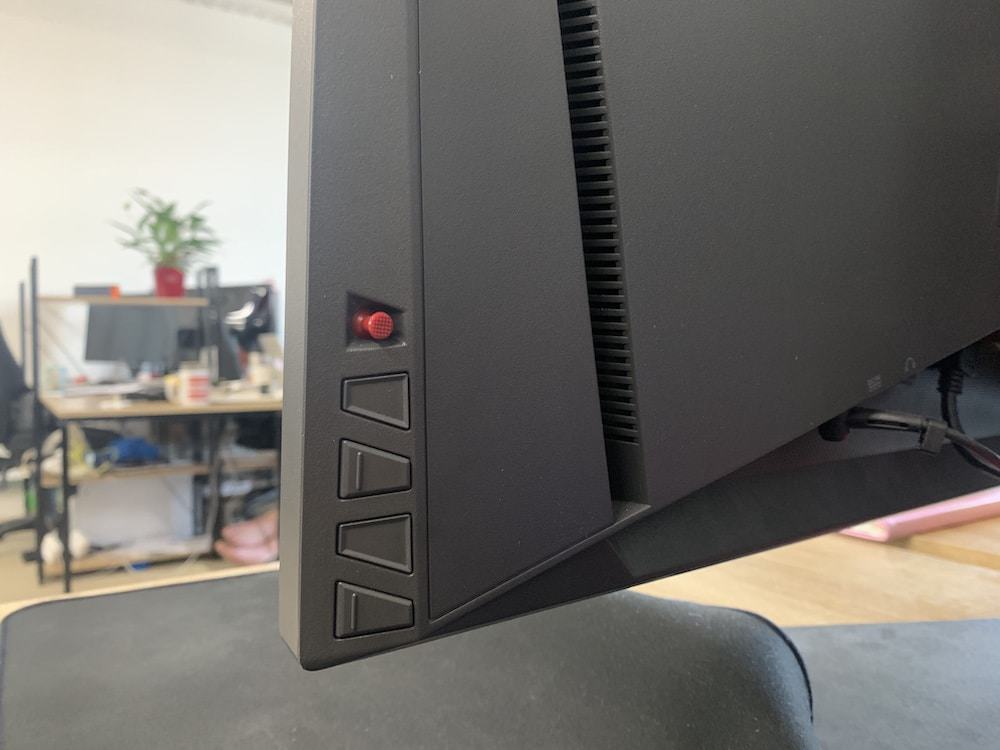 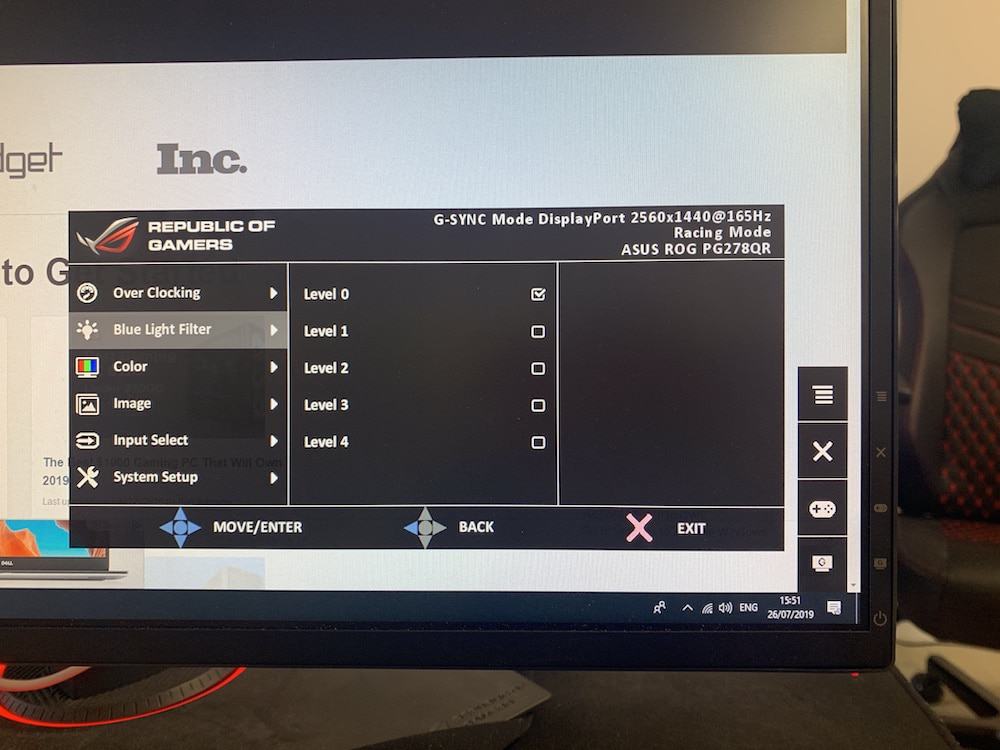 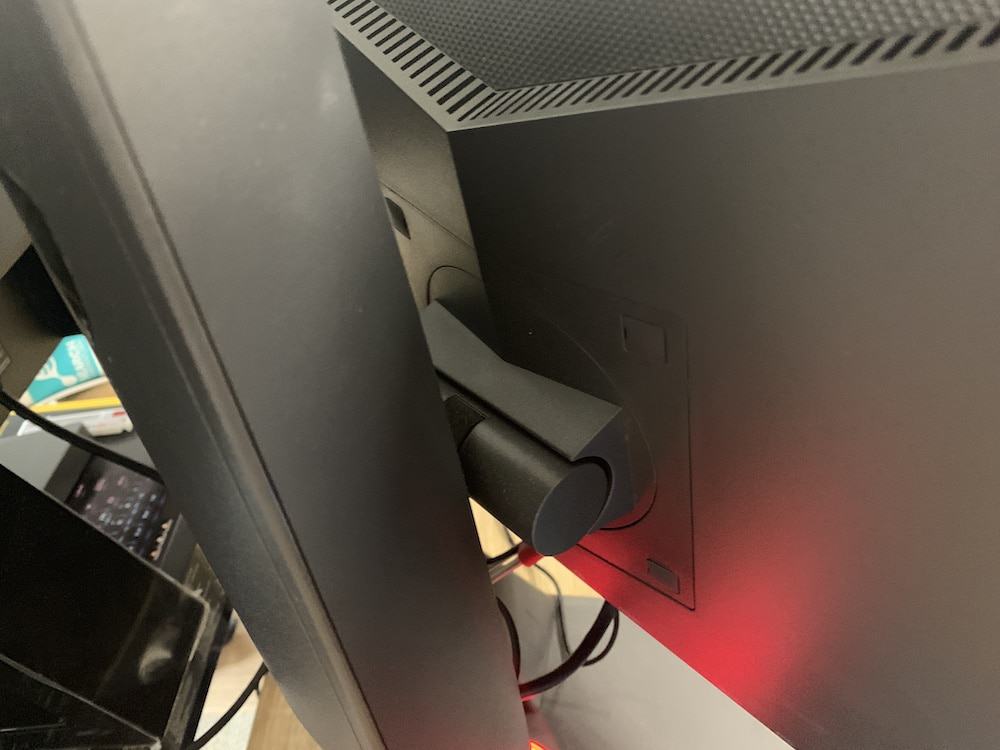 G-Sync is a technology from Nvidia which synchronizes your refresh rate with the GPU in your system, eliminating screen tearing, reducing display stutter and input lag.

To use G-Sync with the PG278QR, you will need to use the DisplayPort cable, which is also needed to overclock the refresh rate to 165Hz.

As mentioned above the PC used with this monitor is sporting a GTX 1080 Ti and fairly decent i5-8600k, so using G-sync was pretty impressive. It is worth noting that if you can't take advantage of this technology due to a low-end build, then you should go for a model without the G-Sync module to save some cash. 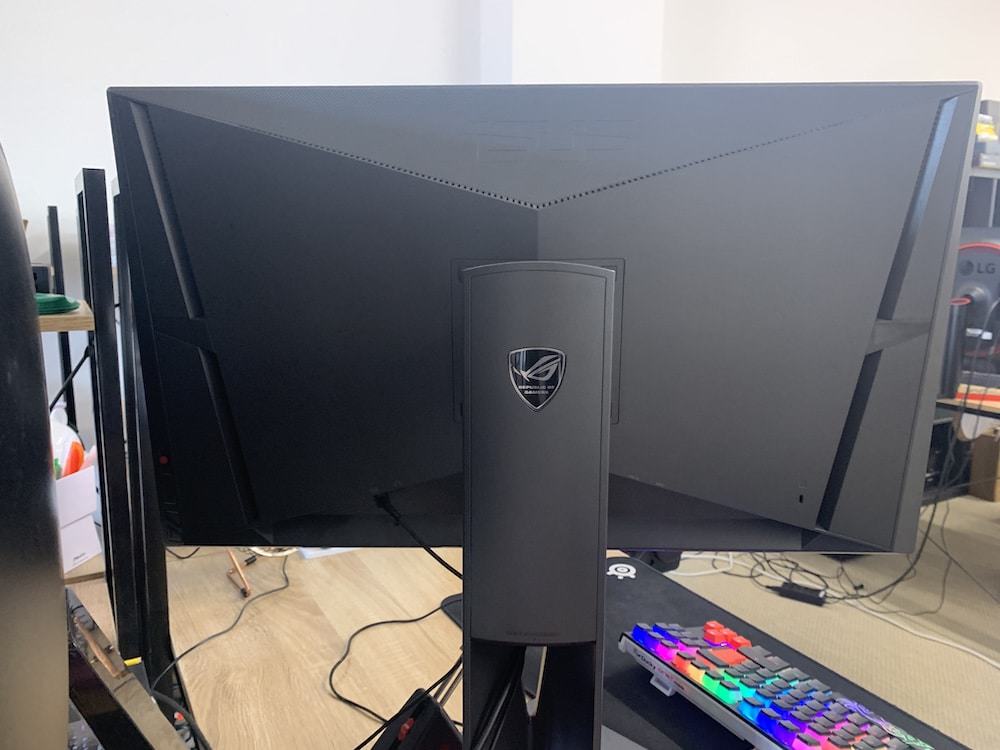 This is one sturdy monitor, and one of its best features is the brilliant stand. The base of the stand feels solid with a bit of weight behind it to keep the bulky display from wobbling. There is swivel from the base which turns 60° to the left and right, with the red LED illuminating the center.

The center of the stand is a hollow piece of angular plastic that fits in well with the rest of the design and is also where we see the slit for cable management. The monitor is attached to this elongated part of the stand, and you can adjust the height by just under five inches without any fuss.

The bracket that connects the display to the stand has a tilt function allowing for a 5° tilt downwards and a 20° tilt upwards. The monitor is 100% VESA compatible with some rubber grommets covering the screw holes. The VESA mount holes are on a circular bracket which gives the monitor its 90° rotation to the right for an alternative setup. 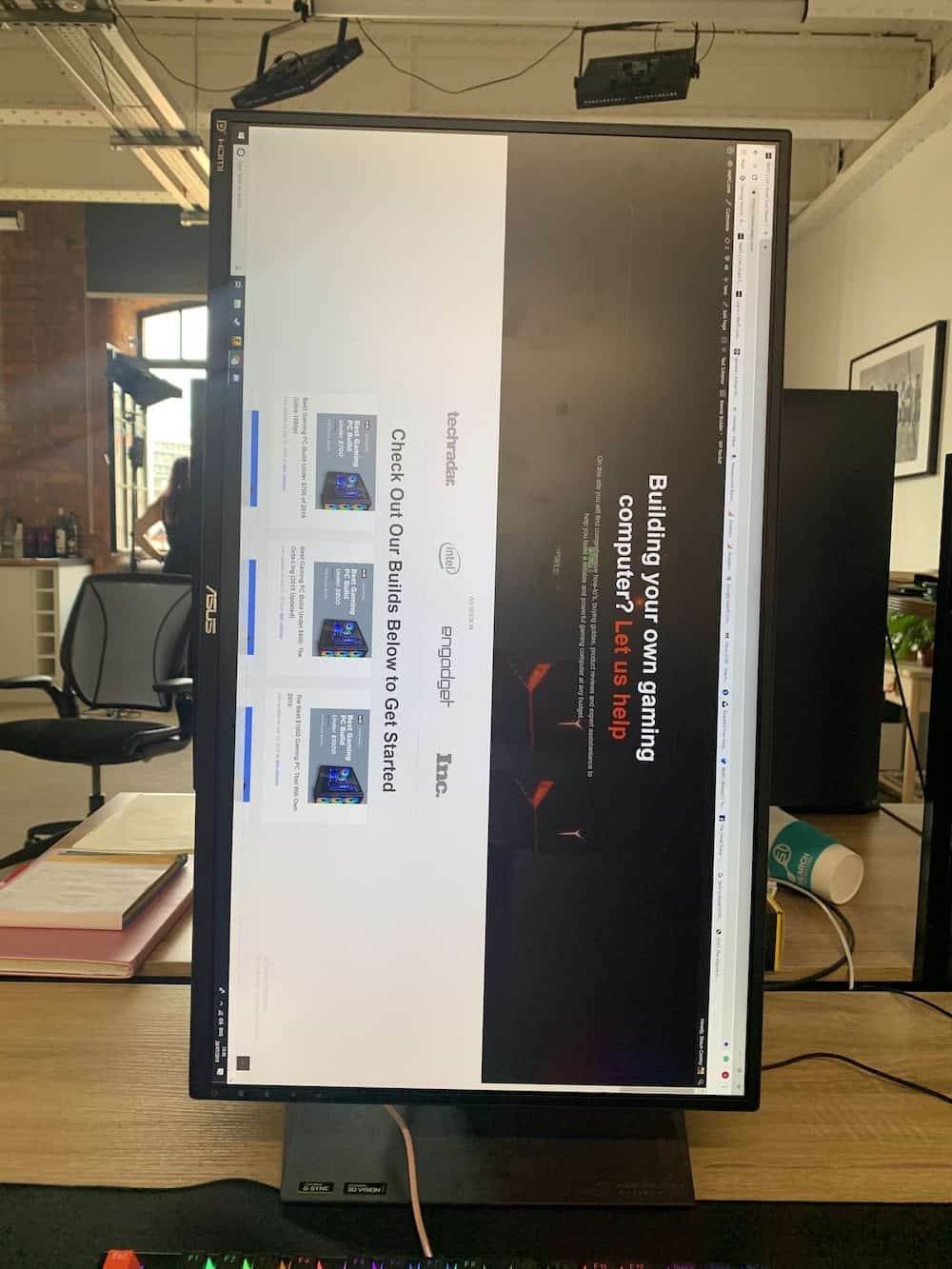 Some of us work with monitors day and night (especially if we like an evening game after work). It doesn't matter whether at home or in the office, we can strain our eyes and sometimes risk getting computer vision syndrome. Both of these ailments can lead to health issues, so the introduction of eye care on our monitors is a breath of fresh air.

Asus eye care technology is designed to prevent these ailments from developing to ensure we have a comfortable viewing experience, even if we plan a marathon session.

Ultra low blue light is part of this eye care technology, and it features in the ROG Swift PG278QR. This feature protects you from the harmful blue light by removing it along with the radiation without compromising the quality of the image. You can change between four different filter settings that are available in the OSD.

The PG278QR also features flicker-free technology as part of the eye care package. Screen flicker is extremely harmful to our eyes, and unfortunately, the naked eye can't see the flicker, meaning we damage our eyes without even really knowing. Flicker-free technology reduces the flicker, resulting in a reduction of eyestrain and less eye damage when playing for an extended amount of time.

When I first sat in front of this 27" beast, it felt rather large and bulky with there being much sleeker options available that claimed to offer similar levels of performance. These negative thoughts soon passed almost as soon as I began to get used to it. The 2560 x 1440 resolution is great, and I would undoubtedly recommend 1440p for gaming as long as your system can handle a resolution like this.

Let's start with the bittersweet; the TN panel is easily one of the best I have used. However, it is a TN panel at the end of the day. The reason we regard this highly despite its panel type is down to the fact it's highly responsive with its 1ms response time, and it has an 8-bit interface. What is most impressive for a gaming TN panel is the out of the box DeltaE which sits at 1.2 and can be increased to 1.6.

Changing the gamma wasn't an issue with this monitor either with three preset options in the OSD, which includes 1.8, 2.2, and 2.5. I found 2.2 to be the better of the three; however, this was only when blue light was turned off to level 0. Regardless of what settings you plan to use with this monitor, the color and contrast reproduction is fantastic for a TN panel.

Lots of gamers are favoring IPS panels over TN ones these days thanks to the better color and contrast reproduction, but it's not always the best choice. During the last few months of testing, I haven't seen any ghosting from the monitor or any bleeding from the backlight. The monitor is perfect for competitive gaming with its lightning fast pixel transition, and as long as you sit directly in front of this, you aren't going to see much wrong with it.

The monitor is 144Hz out of the box, so it worked as a responsive gaming monitor immediately, and there isn't need for G-sync if you don't want to turn it on, but there are cheaper models which can cater for this. I set this up using DisplayPort and overclocked the refresh rate to 165Hz as soon as I turned it on. When pairing this refresh rate with the G-Sync technology, it was one of the smoothest gaming experiences I have ever had. I tested G-Sync in Battlefield 5 and a little bit of CS:GO, and it was a massive step up from my previous budget 144 Hz monitor. The colors weren't as good as my 4K monitor at home, but it wasn't a huge difference, and there is no way I'm going back to my 60Hz 4K monitor ever again after using the PG278QR.

Is it Worth The Money? 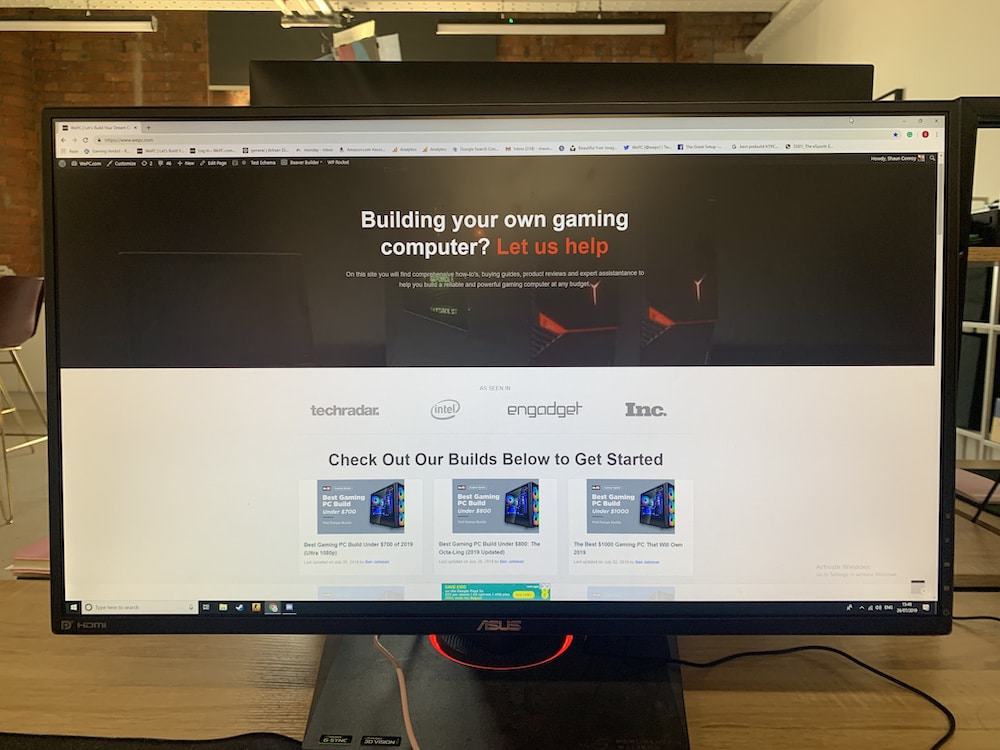 For a TN panel, the image reproduction is surprisingly good and is easily one of the best I have used. The high refresh rate and G-Sync module work brilliantly without a hitch, offering the ultimate experience for any competitive players out there.

Overall, though the ROG Swift PG278QR impressed, however, it is difficult to see why you would choose this one over the IPS version. That being said, the features in this monitor are superb and it seems to reduce in price quite regularly entering it into calculations.