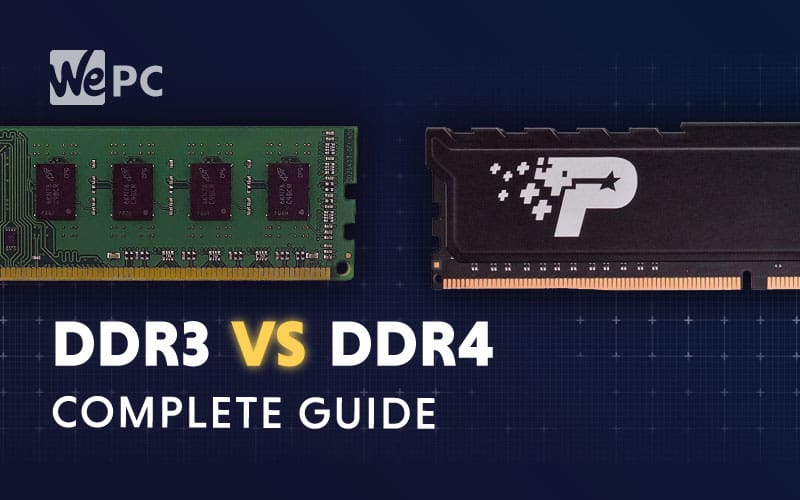 Before DDR4 hit the scene, DDR3 was the go-to RAM when it came to consumers’ memory needs. However, once Hynix announced that it had developed the world’s first high-density 128GB module based on 8GB DDR4, DDR3 slowly but surely began to fall in rank. DDR3 quickly became outpaced, outpriced, and overall outperformed by the superior technology DDR4 came equipped with. And even though almost everyone now chooses DDR4 instead of DDR3, there are still a few unanswered questions regarding the topic.

In the following article, we will be discussing all the major differences between DDR3 vs DDR4. That’s everything from price, to speed, and everything in between.

So, with that in mind, let’s dive straight into it!

People reading this probably already know what RAM is, but for those that don’t – and to put it in its simplest form – RAM (Random Access Memory) is the physical hardware inside your computer which temporarily stores information. The information stored in the working RAM can be written and read at any time and in any order, meaning quicker RAM will naturally have better performance when it comes to processing data.

DDR3 RAM is the 3rd iteration of what is now known as SDRAM (Synchronous Dynamic Random Access Memory) and was previously thought of as the go-to RAM when choosing memory. However, since the announcement of DDR4 in 2014, we’ve seen a rapid reduction in DDR3 sales across the board.

Like most new technology, DDR4 RAM comes equipped with a bunch of cool new features and advancements over its predecessor. It offers much faster speeds, more capacity, and (overall) better build quality.

With that in mind, let’s take a closer look at some of the more intricate differences between the two RAM modules.

DDR3 Vs DDR4 – What Are The Differences?

The first and most obvious difference between DDR3 and DDR4 RAM is found within the pin nodules. DDR3, when introduced back in 2007, came to the table with a 240 pin nodule which was designed for older generation motherboards. However, when DDR4 arrived (7 years later), it no longer made use of the same 240 pin nodule. Developers opted for a larger pin nodule of 288 which can clearly be seen when comparing the two, visually. 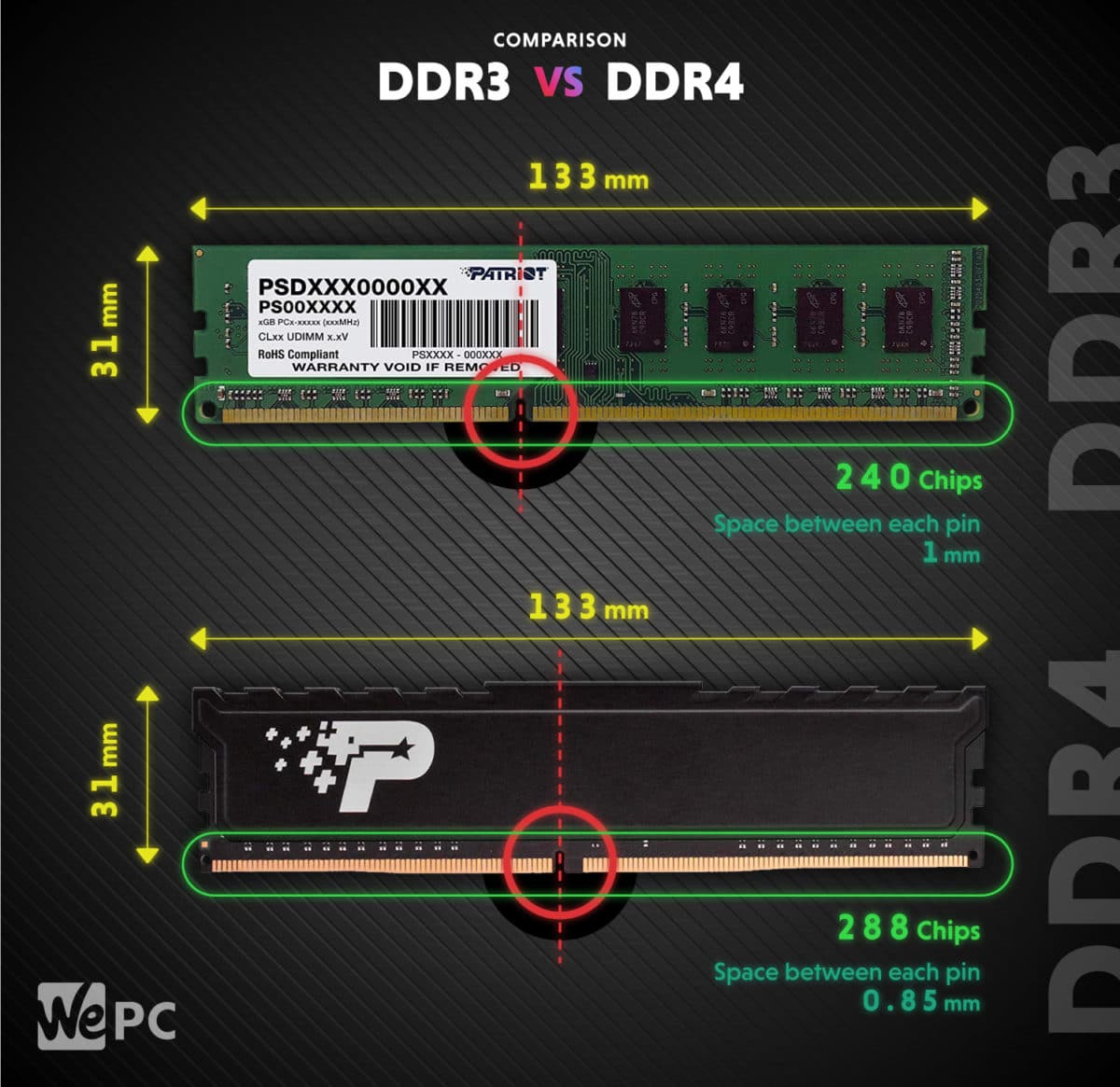 So, what did that mean for people looking to purchase the updated RAM? Well, ultimately, it meant DDR4 RAM wouldn’t be compatible with a DDR3 motherboard. That, in turn, meant additional costs would fall on anyone looking to upgrade from DDR3 to DDR4. Annoying.

On the other hand, the length of the 2 DDR’s hasn’t changed at all – still sitting at roughly 133mm – meaning developers had to narrow the gap in between each pin by 0.15mm to accommodate for the additional 48 pins DDR4 makes use of. The height between the 2 modules (when the heatsink is removed) also varies by just over a millimeter. But with the ever-changing heatsinks that manufacturers provide these days, that makes no real-world differences to us, as consumers.

With appearances aside, let’s look at some of the more technical differences that separate DDR3 and DDR4 RAM.

As you can see from the graph above, both RAMs vary quite a bit when it comes to voltage levels. Like all hardware components, the RAM requires a certain amount of power to function. DDR3 when in use runs at 1.5v whereas DDR4 RAM runs at 1.2v. In the large scale of things, this can basically be interpreted as (roughly) a difference of 15 watts.

From an everyday user point of view, this is deemed fairly irrelevant. However, for huge server farms with thousands of individual modules, an extra 15 watts per stick soon adds up to a huge power increase. Furthermore, lower volt RAMs have been considered much more stable – creating a much more efficient running machine.

Whether we’re looking at RAM, CPUs, or GPUs, the clock speed of hardware should be extremely high on your list of considerations. In most cases, it has a direct impact on not only performance but price as well. There are significant differences in clock speeds when comparing DDR3 to DDR4 RAM, but before we dive into that, it’s worth explaining what clock speed means and how it affects your system’s performance.

As mentioned above, the RAM is your PC’s working memory. It’s the go-to between the CPU and your hard drive that holds instantly readable data in any order and at any time. Now, as we all probably know, RAM comes in a variety of different sizes; 2GB, 4GB, 8GB, and so on. This number reflects how much information each stick can store at any one time. Clock speed is measured in MHz and references how fast your RAM can read and write that data when in communication with the CPU. So, as a general rule of thumb, faster RAM is usually better when using high-demanding RAM applications like Photoshop.

As you can see from the chart above, DDR3 RAM has a maximum speed of 2133mhz. On the flipside, DDR4 starts at 2133mhz and has a maximum of 4800mhz meaning it has a much faster transfer rate. Another huge plus in DDR4’s corner.

Refresh algorithm, in simpler terms, refers to how many times your RAM refreshes itself to ensure it isn’t idling too long. Older DDR3 RAM made use of 2 different algorithms; AR (automatic refresh) and SR (self-refresh). It would switch between the two depending on the scenario and how much stress was being applied to the system. However, DDR4 only uses automatic refresh meaning it will actively refresh to make sure no new information is waiting to be processed. With DDR4 RAM consuming much less power, it paved the way for developers to make use of AR solely – providing a far more efficient product.

Latency, or memory timings, is a breakdown of how fast your RAM can perform the actions needed to read/write the data it’s storing. Memory timings are measured in nanoseconds and are (usually) displayed in four key parameters: CL, RCD, RP, and RAS.

Each parameter refers to a different action the RAM must perform when locating data used by an application. Without getting overly technical, RAM technology can be thought of like an Excel spreadsheet. It makes use of rows and columns when storing data needed by your system’s applications. So, when an application needs to use data being stored on the RAM, the RAM must find the data requested by locating an individual column and row. So, as a general rule of thumb, faster timings usually means better performance.

With that in mind, it’s worth mentioning the effect fast clock speeds have on your RAM’s timings. Nine times out of ten, the higher the clock speed, the slower the latency. That doesn’t necessarily mean the RAM is slower, it just means it has slower timings – and as we know, that’s just one part that makes up a RAM’s performance.

To put it in more physical terms, DDR3 is currently operating on CL11 which takes 13.75 nanoseconds to complete a read. DDR4, on the other hand, runs on CL15 which takes 14.06 nanoseconds doing the same task. The difference is roughly 2%, so not huge but definitely a difference.

Memory capacity is pretty straight forward and a complete win for DDR4. Memory capacity is becoming more and more important, especially when multitasking or gaming is concerned – one of the main reasons DDR4 offers much bigger capacities. DDR3 ranges from 512MB up to 8GB whereas DDR4, in comparison, offers 4GB up to 16GB. That means DDR4 can potentially house double that of DDR3. No brainer. The benefits of more RAM capacity are fairly substantial and we certainly see a big difference in performance when upping the RAM’s capacity.

Finally, we come to the big questions most people want to know – what’s the difference in cost between DDR3 vs DDR4? And is DDR4 worth the extra investment?

Well, let’s not get too carried away, we’re now in the 21st century and every man and his dog are now using DDR4 – unless you’re using a hugely outdated PC. DDR4 is a no-brainer. It offers better performance, better capacity, better build quality, better heat dissipation, and outperforms DDR3 in every other area as well. Even looking to buy DDR3 nowadays is more costly than DDR4. Not to mention you’d have to be using old PC components to be compatible.

So, to answer that question briefly, yes. DDR4 is 100% worth buying in today’s market. If I was writing this piece five years ago, I may have thought differently. Luckily though, DDR4 has now made DDR3 almost completely redundant.

If our PC components are using last-gen technology, I’d highly recommend upgrading your entire build. There are a bunch of affordable components available at the moment, meaning you could build a PC for as little as $300.

All being said, I hope this article has been informative and helps answer any unanswered questions regarding DDR3 Vs DDR4 RAM. Leave us a comment below if you have any questions, or better still, head on over to our Community Hub where you can discuss everything RAM  related with like-minded individuals!