Razer has been expanding recently, with more and more lifestyle products being developed and the most notable of these was the Razer Opus headphones. Today we are looking at the Razer Hammerhead True Wireless earbuds, one of the latest iterations of a product Razer has had for a few years, only now they are actually wireless.

The first thing you are going to notice is that they follow that same Apple AirPod design but these are marketed towards gamers and as a gamer, I would be lying if I said this didn’t raise some suspicion. 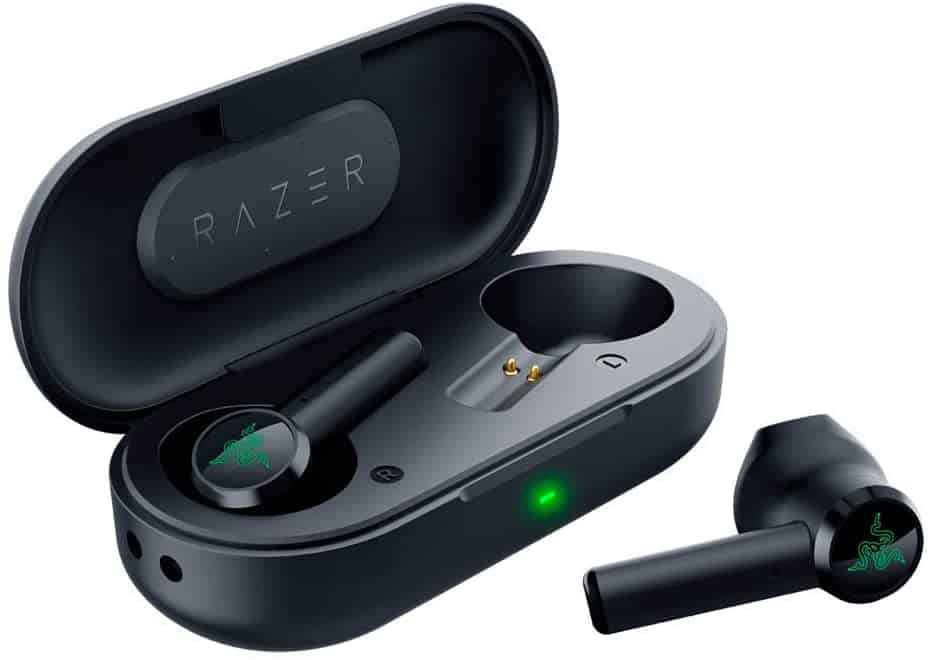 Let’s have a look at what we get inside the box and the overall specs of the Razer Hammerhead True Wireless headphones. 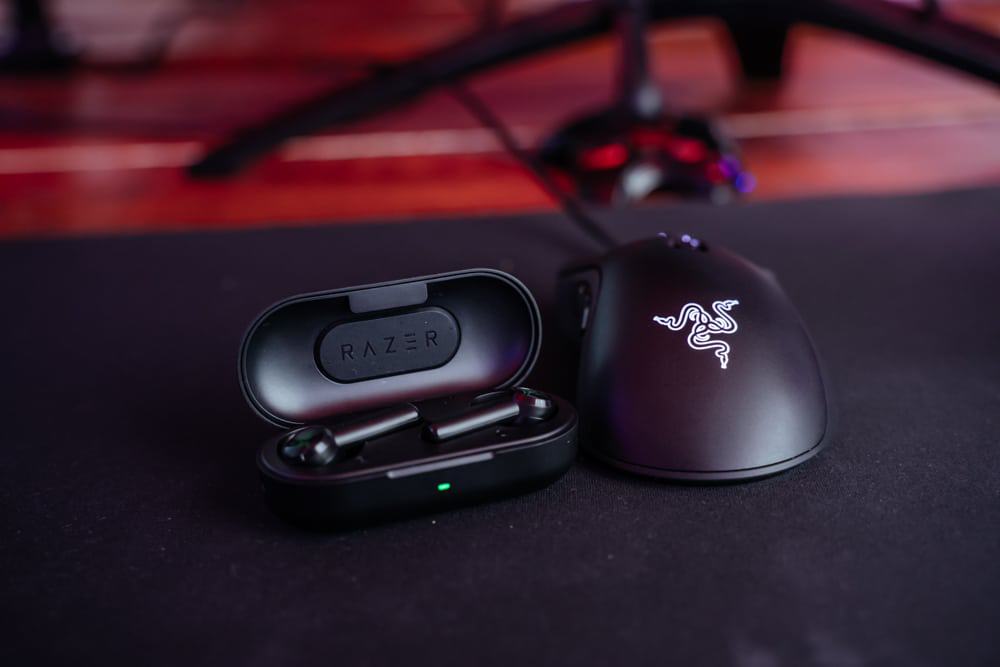 Inside the box we see:

I have to say the design may be minimal but it is done with class. Headphones, particularly earbuds, are always a bit plain and that is largely accepted because they are functional and small. Razer has created something very stylish here that looks very similar to the Apple AirPods but with shorter stems and the obligatory Razer logo on the buds themselves, which does add a nice touch. 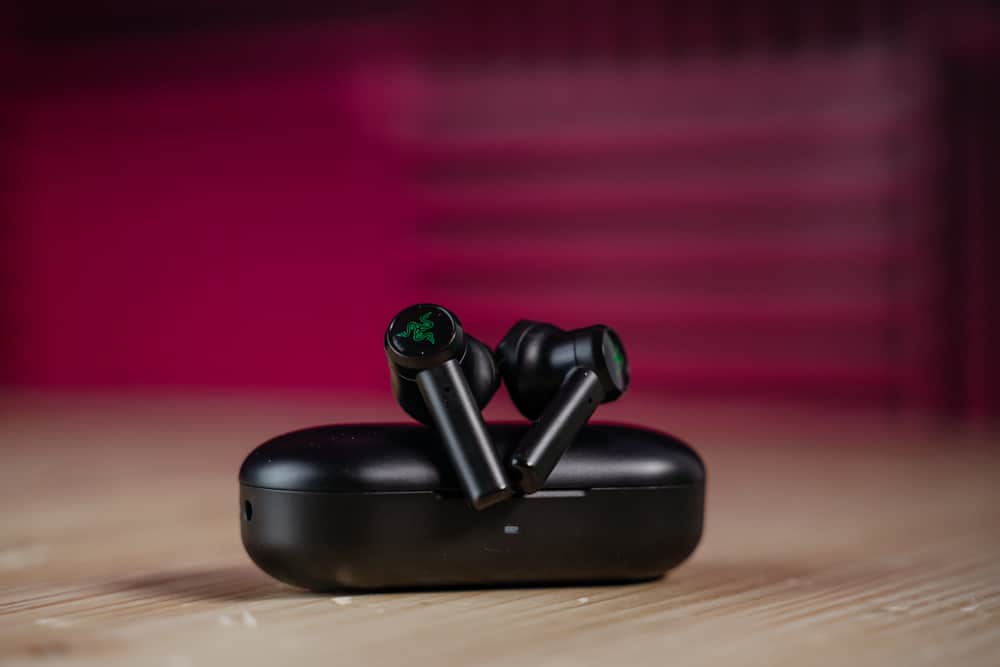 The build quality on this pair of headphones is actually pretty good, they feel solid and have a great weight to them. While they may not be the most durable on the market, they can certainly withstand a few drops but without testing this I’m unsure how the internal components would cope in that scenario. They are made from matte black plastic, which doesn’t pick up any grease or dust from the surroundings as the carry case does. The earbuds are also rated IPX4 for water resistance.

The included carrying case is what I expected, a small plastic box. I have seen others complaining about the quality of this carry case and I’m not entirely sure what they expected for the price they retail at. The case is all black with the Razer branding etched on and that’s it. While the durability is a concerning question of this carry case, it does exactly what it’s supposed to do – charge and protect your earbuds.

The case looks like most on the market but feels quite similar to the Anker SoundCore Life P2 Truly Wireless case. One thing to note about the case is the slightly wobbly lid. The lid could get damaged after prolonged usage and is certainly an area of the product you should handle with a little extra care. 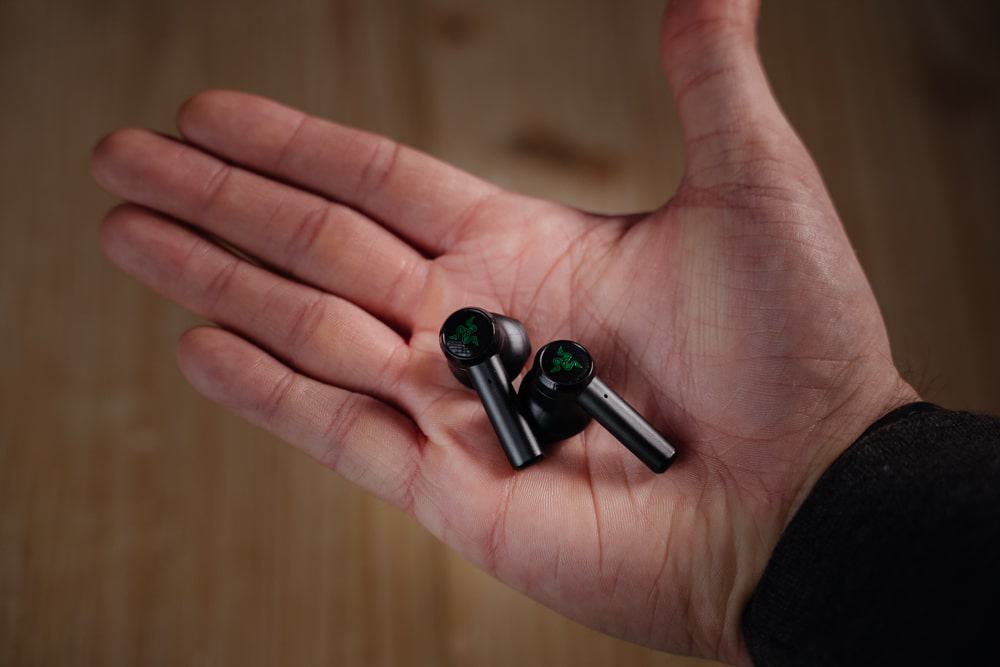 Comfort was the biggest area of surprise to me. I have always used earbuds on the go since they first came out all those years ago and this is because I hate the heavy and bulky nature of regular headphones. One compromise I have always had to get used to is the fact that I can never get a pair of earbuds to fully fit in my ears, regardless of how many different sized tips I try.

Well, these fit superbly and still feel comfortable after several hours with them in. Now, obviously, everyone has different sized ears, so the fact that these fit mine may mean they are too small/large for your ears. Another potential issue is that they do not come with any tips or ways to interact with different sized ears, so it’s kind of a one size fits all design like Apple’s AirPods.

An area in terms of comfort the Razer Hammerhead’s excel is with stability. These are a very stable pair of headphones, which again could be down to the ideal fit with my ears but I think this is owed to the overall design. These come with little silicon sleeves to help grip your inner ear and add extra stability but I never needed them. Even during a brisk walk or jog, they didn’t feel like they were going to fall out and I didn’t have to keep readjusting them/ push them back into my ears.

With any truly wireless pair of earbuds, you get a lot more features right out of the gate compared to wired counterparts. The Razer Hammerheads are packed with impressive features that add quite a lot of value to the product. This pair feature custom-tuned 13mm dynamic drivers that produce a quality listening experience, which we will touch upon a little later. The main feature to anything wireless that ties in with gaming is always going to be latency. Latency doesn’t really pose an issue when using these for generic listening but they are marketed towards gaming, so it is an area we need to access. 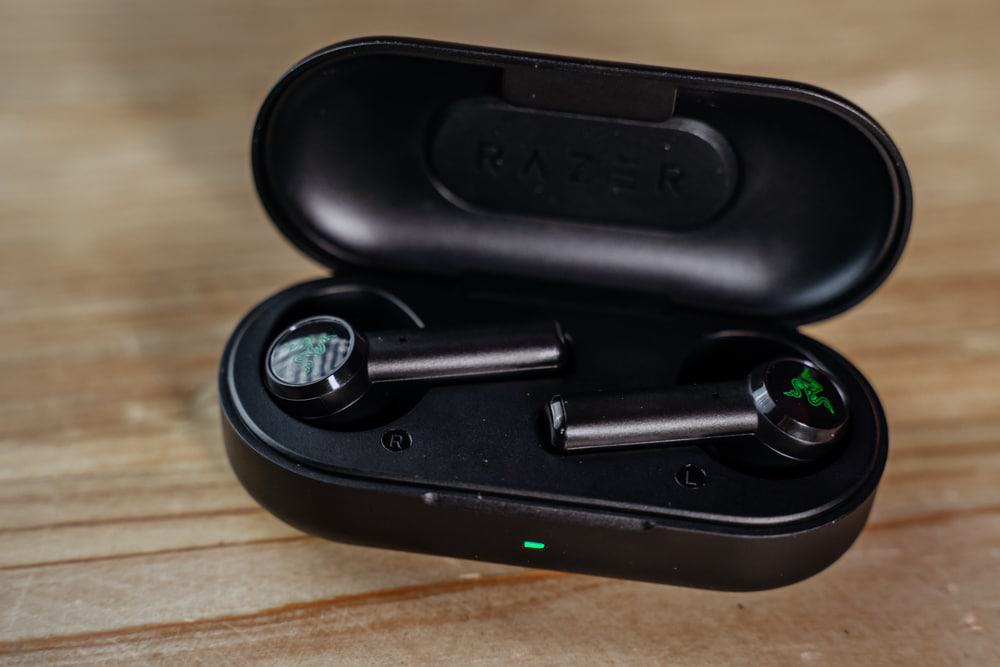 When in “Gaming Mode” the earbuds latency reduces to 60ms, which is going to be more than OK for single-player gaming. When it comes to competitive gameplay, you are obviously unlikely to be using headphones like this but it is worth pointing out that 60ms latency may not be the best on the market, however, is feasible.

The Razer Hammerheads are obviously designed to be worn outside, whether it’s just commuting or the occasional outdoor activity. They feature a water-resistant IPX4 design, which basically means these will survive the odd splash of rain from every direction. While this definition is rather vague, i’m pretty sure these can handle light rain but if you find yourself in a torrential downpour, it is probably best to tuck them away.

Before we get into the headline features, it is worth bringing your attention to the touch-enabled functionality. With a light touch from your finger-tip, you can turn these on and off or, of course, pair them to your device. The Razer logo on the side doubles up as the touch-sensitive pad and it takes a fair bit of getting used to the various controls.

For example, to pause a track, you are going to need to hold your finger on the pad for about half a second. Other types of wireless earbuds often just use touch to work but this, in turn, can lead to accidental prompts, something which is eliminated by Razer’s system.

Take a look at the below table to see the various controls from the touch system: 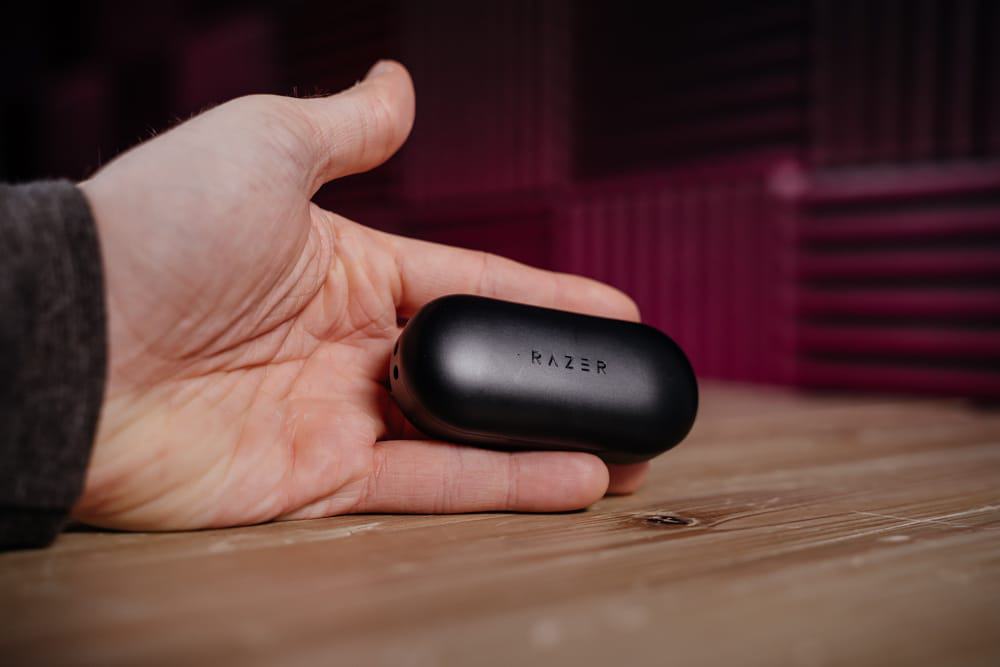 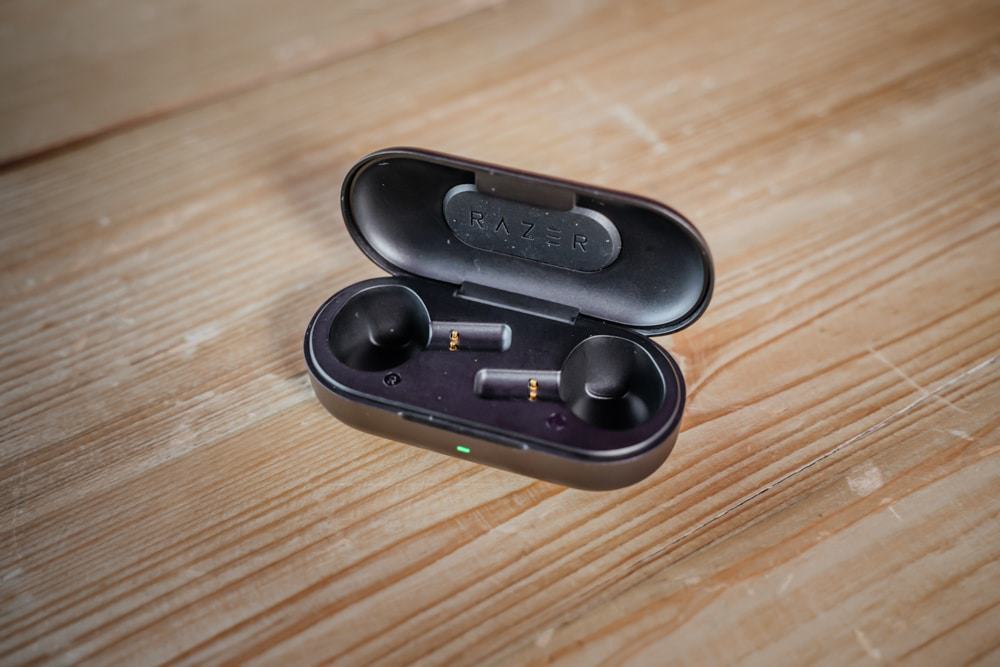 While battery life isn’t that impressive, it uses BlueTooth 5, which requires less power. A downside to this technology is the lack of support from consoles like the PS4 or Xbox One but these are obviously focused more towards PC and mobile gamers. 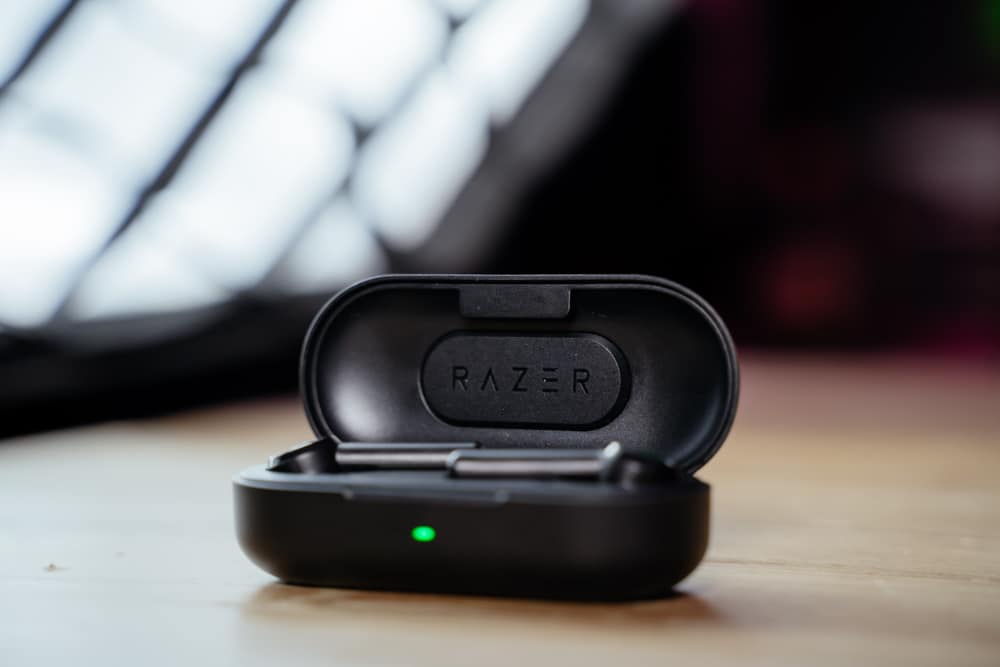 The best part of this carry case, and well most of them, is the magnetic feature that makes your life a lot easier. No idea why but anything that slots into place with magnets is extremely satisfying.

Whenever I test out new earbuds my expectations are usually already low, they simply cannot compete with over-ear headphones or gaming headsets. Firstly, the overall sound quality is somewhat clearly above the cheaper wired alternatives we see from HyperX and Cooler Master, so let’s have a look at why. 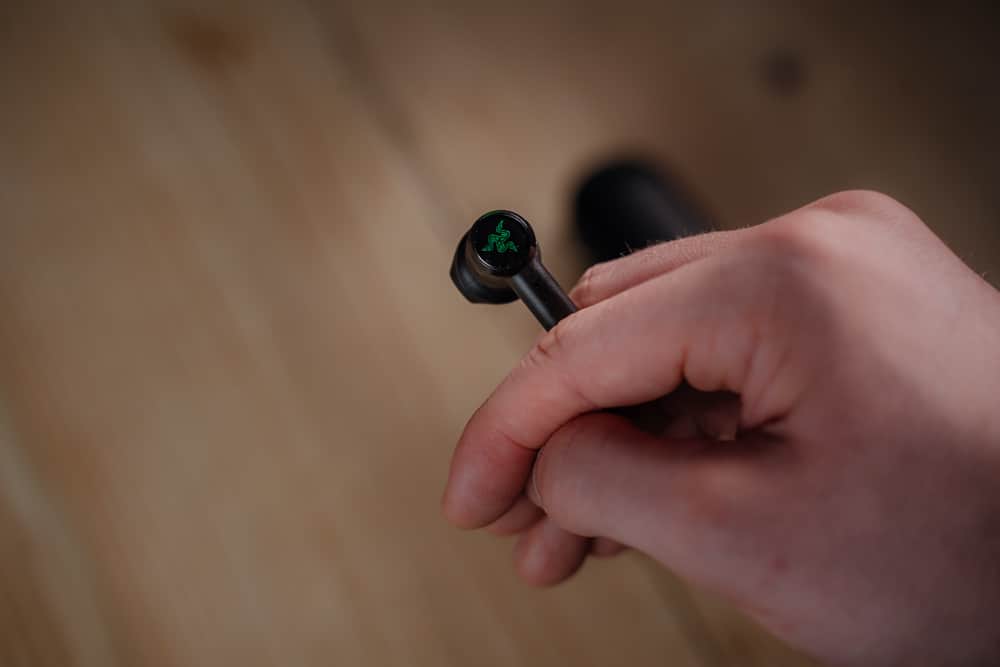 The Razer Hammerhead headphones are considered average for mixed usage and that is largely down to poor isolation and a weak soundstage. These headphones come with a standard frequency response range of 20-20,000Mhz and lack the bass quality we see from some of the competition, with it sounding a little muddy in places. In fairness, the bass when listening to music is quite good and the occasional shooter becomes quite immersive but there is a lack of clarity and detail that can make more vocal-based content a bit lackluster. The sound stage, as mentioned, is rather small but the sound is being funneled directly into the ear canal so it isn’t the biggest issue when dealing with in-ear headphones. The mids sound ok but in the low to mid-range but it can sound a bit cluttered at times, with vocals sounding weak and distant. Treb accuracy is a bit underwhelming, with instruments losing their detail at times but this can be quite common among in-ears within this price range.

When it came to sound performance as a whole these aren’t bad and what was quite impressive was the leakage or lack thereof. Normally earbuds have terrible leakage but these headphones perform well. This means you can listen to music or take a phone call at max volume without annoying the person next to you unless you are in an extremely quiet setting.

I tested these on PC for gaming before anything else and I really enjoyed the convenience of both wireless connectivity and how lightweight these are at 45 grams. The sound performance, while lacking any form of noise cancellation from the environment, was enjoyable. There was a distinct lack of detail, with these performing similarly to budget gaming headsets but I could easily use these as my daily driver for games.

I loaded up Insurgency: Sandstorm for my initial test, as the game features excellent audio and tonnes of explosive action, so it really puts audio equipment to work. To be honest the experience wasn’t bad, with explosions making use of that muddy bass to full effect and I could still hear the various gun sounds and in-game audio cues without listening too hard.

The microphone is pretty but it is exactly what I expected from in-ear headphones. Should you replace your gaming headset with these? No, you shouldn’t but can you get clear communication across in-game? Yes, no problem.

The integrated microphone is omnidirectional and struggles to isolate your voice when in a crowded space, much like most modern phones. They were still acceptable though, and after some testing, I can’t say much other than there was a distinct lack of quality. The bottom line from the mic was others can understand what you are saying but there is a clear lack of detail, with your voice often sounding muffled.

The Razer Hammerhead Truly Wireless headphones look and feel great. These perform closely to other truly wireless earbuds, with similar sound and microphone performance. The only main difference is that these are clearly marketed as “gaming” earbuds, which is where they fall short.

While these feature average sound performance, they are quite good for sports and outside activities. The included silicone sleeves add extra stability and the IPX4 rating for water-resistance means you can get away with wearing this during a brief bit of rain. Overall, the Razer Hammerhead Truly Wireless headphones are comfortable, light, and very convenient.

While these feature average sound performance, they are quite good for sports and outside activities. The included silicone sleeves add extra stability and the IPX4 rating for water-resistance means you can get away with wearing this during a brief bit of rain. Overall, the Razer Hammerhead Truly Wireless headphones are comfortable, light, and very convenient. 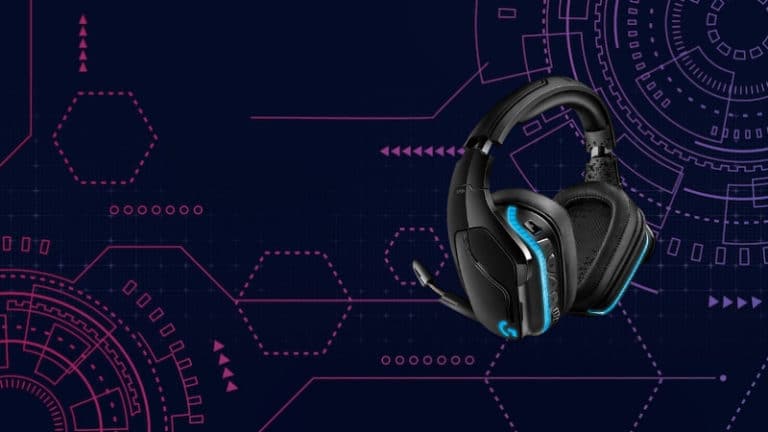 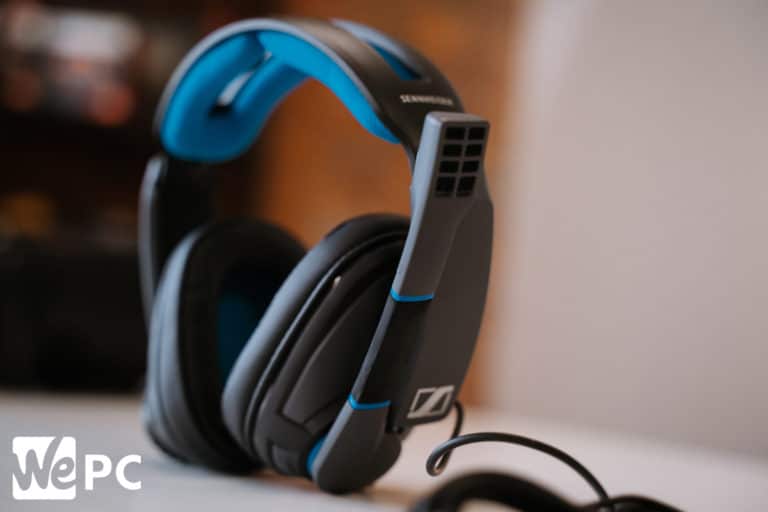 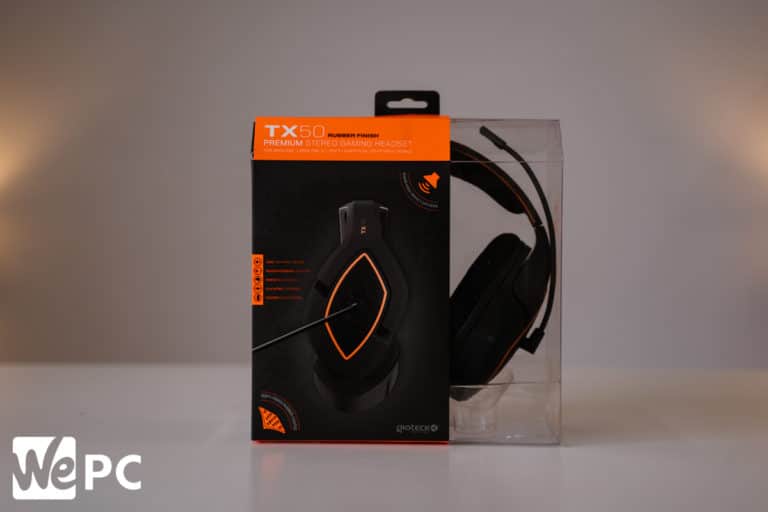 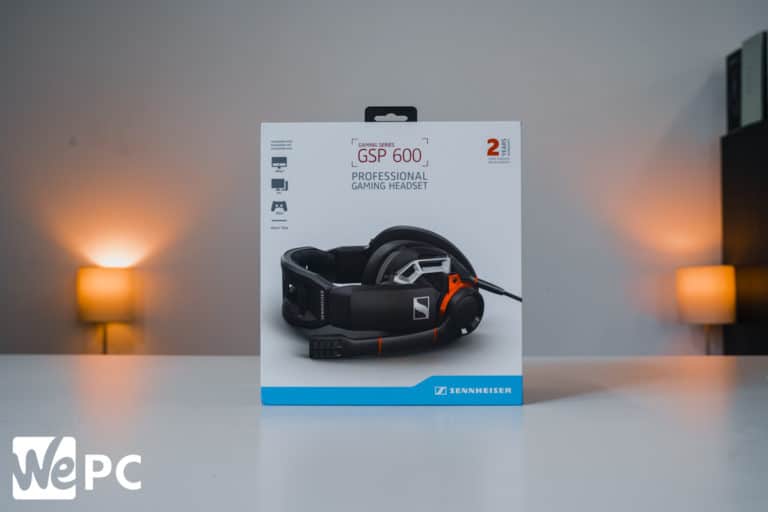