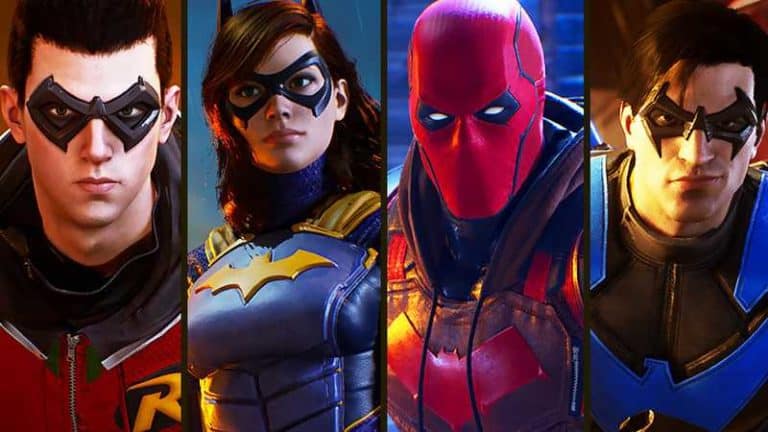 Another DC game is set to join the ever-expanding roster of comic book games. Gotham Knights is an upcoming action RPG game by WB Games Montréal and published by WB Interactive Entertainment. Set to release on PC, PlayStation 5, and Xbox Series X/S, this open-world Gotham-based action game features a number of popular and beloved DC heroes, including Nightwing, Batgirl, Robin, and Red Hood. If you’re a fan of these characters, you’ll be please to hear that thanks to the most recent Gotham Knights Gameplay trailer, we’ve gotten a look at how Nightwing and Red Hood’s gameplay will look.

Dick Grayson, also known as Nightwing, is renowned for the large number of tools and weapons he has at his disposal. Being Bruce Wayne’s adoptive son, and having formerly been Robin, Nightwing learned to use all the tools and gadgets Batman would often use. He learned a lot of his skills and abilities from his adoptive father, including being a prodigious athlete, a computer hacker, excelling in firearms, investigation, and a number of other skills.

Considering Gotham Knights is an open-world game, one of the most essential elements to incorporate in this genre of game is maneuverability. We see it time and time again in games like Prototype, Spiderman, Infamous, and Arkham City. These games feature a distinct and unique way of traveling, and Gotham Knights is no different. However, where it does differ is that each character in Gotham Knights has their own way of maneuvering across the city. In the recent gameplay trailer, Nightwing was revealed to have his glider, the ‘Flying Trapeze.’

We experience a different type of Gotham Knights gameplay when mantling Red Hood. Another one of Batman’s adoptive sons, and also a former Robin, Jason Todd is known for being a bit more violent and using more lethal methods to fight crime in Gotham. Although Nightwing prefers hand-to-hand combat, Red Hood prefers to brandish a number of his guns. Leading to a bit more ranged combat, as he takes on his foes, using the other tools at his disposal for crowd control.

Though Red Hood possesses a lot of the abilities Nightwing does, due to being immersed in the Lazarus Pits, Red Hood possesses some magical abilities. In particular, magic negation which was taught to him by Talia Al Ghul. We also see him use a small amount of these magical abilities by double-jumping between his usual grappling hook method of transportation across Gotham. If you want to check it out for yourself, take a look at the gameplay trailer above.

As revealed in the Gotham Knights Gameplay trailer, we’ve seen that the Batcycle is a method of transportation accessible to all of the knights. But if you choose to pre-order Gotham Knights, you’ll be able to get the 233 Batcycle skin!

Gotham Knights is set for a 25 October 2022 release date!

That’s all for now, but as more details come we’ll be covering it all!